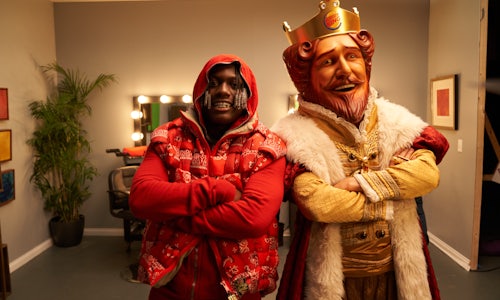 Entered in Food & Beverage, Creative use of Technology

This campaign was inspired by two core insights that gained prevalence during the 2020 pandemic:

With so many of our loyal fans at home and yearning for fresh and interesting entertainment, these insights drove us to our main objectives for the program. These objectives ultimately helped us createa compelling fan experience by authentically connecting Burger King with relevant VMA moments to drive excitement and anticipation throughout the night.

For Burger King’s inaugural VMA partnership, MTV architected a mobile-first, technology-infused branded content series that captivated fans through a sequence of breakthrough creative moments that leaned into pop culture and music themes intrinsic to the VMAs. MTV tapped into A-list rapper and hyper-relevant talent, Lil Yachty, to star in the program, alongside the face of Burger King, The King, establishing his celebrity status.

The dynamic duo of Lil Yachty and The King embarked on a unique VMA experience that came to life in the pre and main show broadcast. In lead up, Lil Yachty tweeted at The King looking for a date to the VMAs. The pair tweeted back and forth, revealing that they were teaming up at the VMAs, generating buzz & intrigue amongst fans. Fans watched the story unfold as The King and Lil Yachty arrived in style to the show, got glammed up for their big VMA debut, and delivered a one-of-a-kind musical collaboration for fans at home. The in-show branded content prompted fans to unlock exclusive rewards through custom pop art-inspired QR codes, ultimately leading to an unexpected, epic musical moment through the magic of augmented reality – a first-of-its-kind VMA experience that brought Talent into fans’ living rooms. In AR, fans had the chance to watch The King and Lil Yachty in an exclusive performance of “Top Down”, right in the comfort of their own home. They could also influence special effects such as lighting and “fire flames” and unlock a chance to win free whopper sandwiches for a year & tickets to the 2021 VMAs.

The campaign was successful in engaging fans across all platforms during the VMAs and was a prime example in showing the ways in which you can incorporate technology into tried and true platforms such as linear and social to create a holistic, innovative and never-been-done-before fan experience. The campaign served as a case study across ViacomCBS, inspiring additional uses for QR codes and augmented reality experiences to enhance our marketing efforts. The program exceeded key KPIs, as evident below: