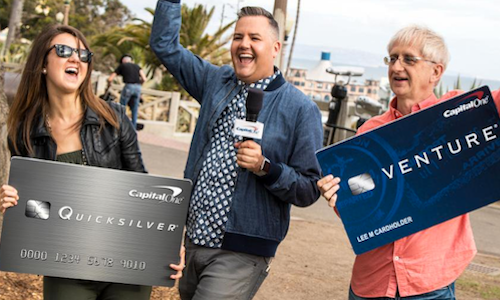 Capital One's Venture and Quicksilver credit cards are premiere in their rewards categories. With options for travel rewards/miles versus cashback, we believe that a customer's choice of card and rewards speaks volumes about them – beyond finances. For our customers, their card is an extension of who they are, and they strongly self-identify with their specific group.

To tap into the passion and excitement our customers have for their respective cards, we wanted to engage them via a buzz-worthy social campaign to create meaningful conversation and bring a whole new meaning to the question, "What's in your wallet?" Our goals were to build brand advocacy and gather insights across our Venture and Quicksilver customers through targeted 2-way conversations. We also wanted to pique interest among prospects encouraging them to investigate the benefits of the Venture and Quicksilver cards.

Our Team Up for 10K campaign was an opportunity for customers to tell us why they love their Venture and Quicksilver credit cards. The goal was to celebrate both cards while highlighting what makes each card – and customer – unique. So, we developed a social campaign that asked customers a simple question with no wrong answer: Are you #TeamQuicksilver or are you #TeamVenture? We also incorporated a chance for participants to win big with $10,000 sweepstakes prizes for one lucky Venture cardholder and one Quicksilver cardholder.

Ross Mathews served as our celebrity spokesperson and the face of the campaign. We kicked off Team Up for 10K with a series of online videos and GIFs featuring Ross and his signature man-on-the-street style interviews asking cardholders to tell us which side of the debate they were on and why. This content encouraged other cardholders to join the conversation using #TeamQuicksilver or #TeamVenture and entered them into the drawing to win the $10,000 grand prize.

To help drive further campaign awareness and conversation, we hosted a Twitter party with Ross giving Venture and Quicksilver cardholders a chance to interact with directly with him on social about summer travel and the valuable rewards customers earn with their respective cards.

We also enlisted our primary spokespeople to get in on the action, helping to drive a dynamic connection between our mass media and social media efforts while extending the campaign's reach and message. Samuel L. Jackson helped rally support for #TeamQuicksilver and Jennifer Garner got cardholders to represent #TeamVenture through social posts from their profiles.

The campaign marks a big milestone for Capital One as the first-ever multi-card campaign and helped provide a multitude of insights about our cardholders.

The Team Up for 10K campaign was successful overall, allowing us to reach a significant portion of customers and gather significant insights.

Video for Capital One's Team Up for $10K Campaign 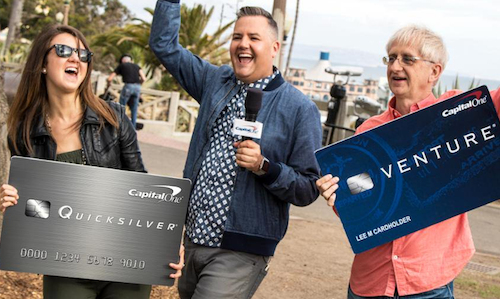