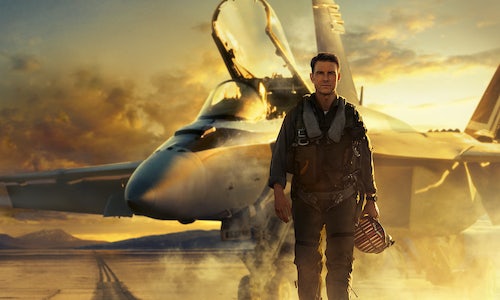 TOP GUN: MAVERICK - HOW WE HELPED MAVERICK TURN AND BURN

As Paramount’s “wingmen” on Top Gun: Maverick, the flight plan was clear: deliver a campaign befitting of the long-anticipated return for this iconic franchise. Honoring the franchise's heritage while activating it for a generation of new pilots, we set out to deliver maneuvers that executed against the following mission parameters:

FLYBY AT THE BEACH

Evoking the first film's signature beach volleyball scene, we executed a Top Gun takeover at the Manhattan Beach AVP Volleyball Tournament. Our five-plane squadron scrambled to the skies, typing out "TALK TO ME, GOOSE" and recreating the logo into 5-mile long visuals at 10,000 feet.

The mission continued on the sand, where we integrated into the competition and broadcast: in-stadium signage and an announcer wearing a branded flight suit (and aviators, of course) introduced the planes flying overhead — all as Top Gun's iconic soundtrack and trailer played through the stadium.

THE DOGFIGHT COMES TO DOGPOUND

Working with celebrity gym and lifestyle brand Dogpound, we created a 4-week #TopGunTuesdays fitness challenge. Beginning with a competition between the best of the best, we pit pairings of LA and NYC “wingman” against one another to see which trainers were ready to be called the top of their class.

From there, we developed a specialized Top Gun workout class, channeling authentic training and fitness regimens for the world's best pilots. All month long, fans took classes in-person and online while voting to see which of the world’s preeminent trainers would be crowned the best of the best.

The fun extended into fall with Halloween! This began with "Top Gun Pumpkin Carving School," a snackable social series where we taught aspiring pumpkin carvers to create fun Top Gun: Maverick-inspired jack-o'-lanterns. Hosted on the brand website and activated on social, fans printed out our custom stencils and carved their own pumpkins throughout the holiday, with the best hosted alongside influencers' creations as UGC.

And with Maverick and his fellow pilots being a popular costume, we invited legions of pilots to dress the part and submit their flight suit photos to be featured on Top Gun's social throughout the Halloween holiday.

BUDDHA AND BLAU NAIL THE LANDING

Everyone wants to be Maverick.. but what happens when they actually get in the cockpit? Culminating the campaign, we challenged iconic gaming streamers Buddha and Blau to grab the throttle and fly Microsoft Flight Simulator’s Top Gun: Maverick missions.

In this exclusive one-hour co-stream on Twitch, Buddha and Blau adopted their callsigns, donned their aviators, and competed across six missions plucked from the film to see who would emerge with the higher score and earn “ace pilot” status. On social, we supported the stream with cross-posts between the brand's pages and streamers' own platforms, with support from Microsoft's social, as well.

Top Gun: Maverick didn't just put Maverick back in the cockpit — it also returned fans to some of the first film's most nostalgic moments.

Honoring the franchise, we compiled a 10-part video retrospective, counting down scenes that the new film paid homage to. Not only did this help reactivate legacy fans who loved the first film, but it helped drive awareness among new fans toward a Top Gun film bundle at retail.

Top Gun: Maverick didn't just nail the landing. Our live-activation stunts, unmissable content, and partnerships helped the franchise hit Mach 11 — and secure its place as both the #1 theatrical and digital/physical film release of 2022, earning $1.486 Billion at the worldwide box office.

Video for TOP GUN: MAVERICK - HOW WE HELPED MAVERICK TURN AND BURN 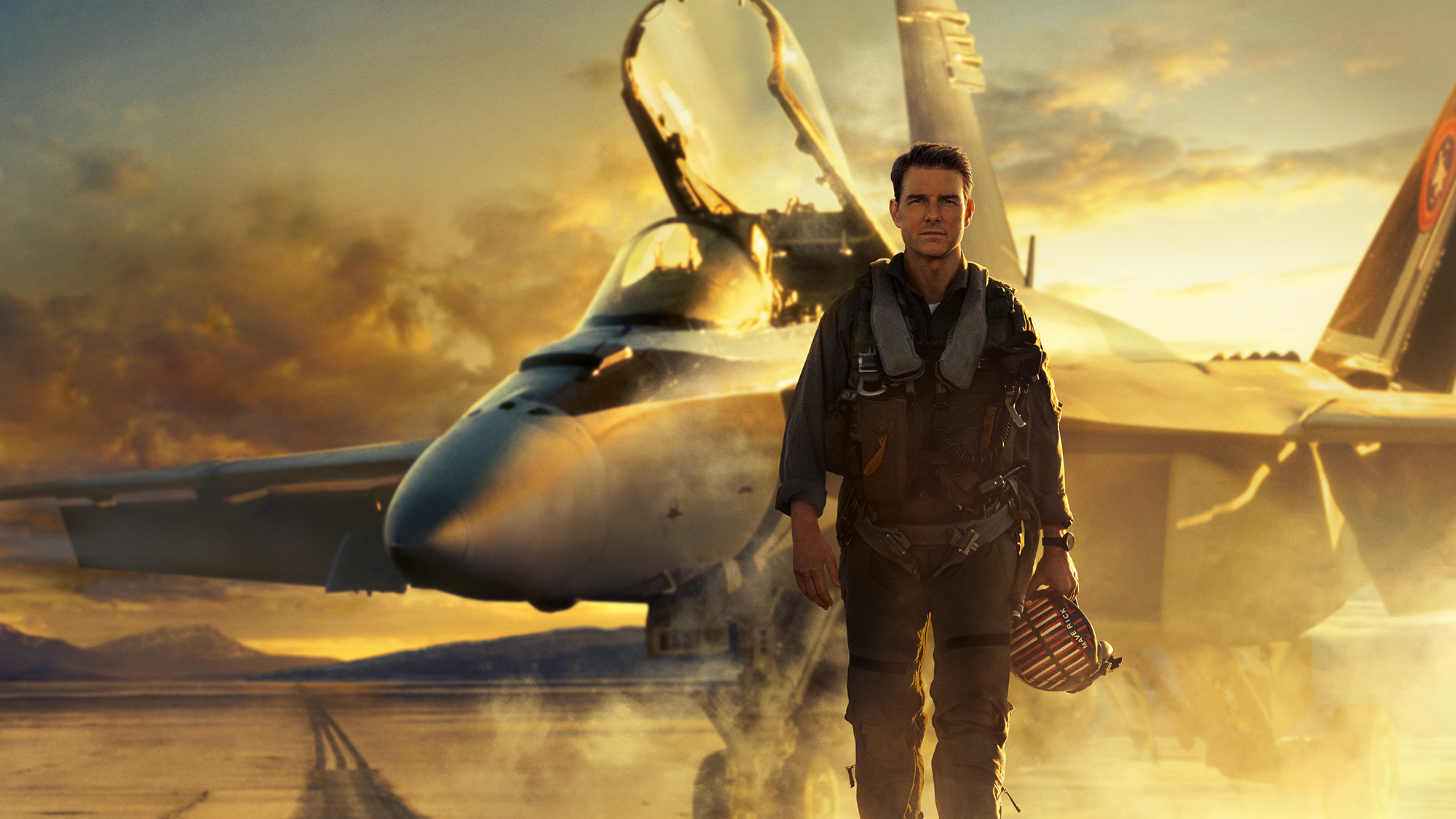 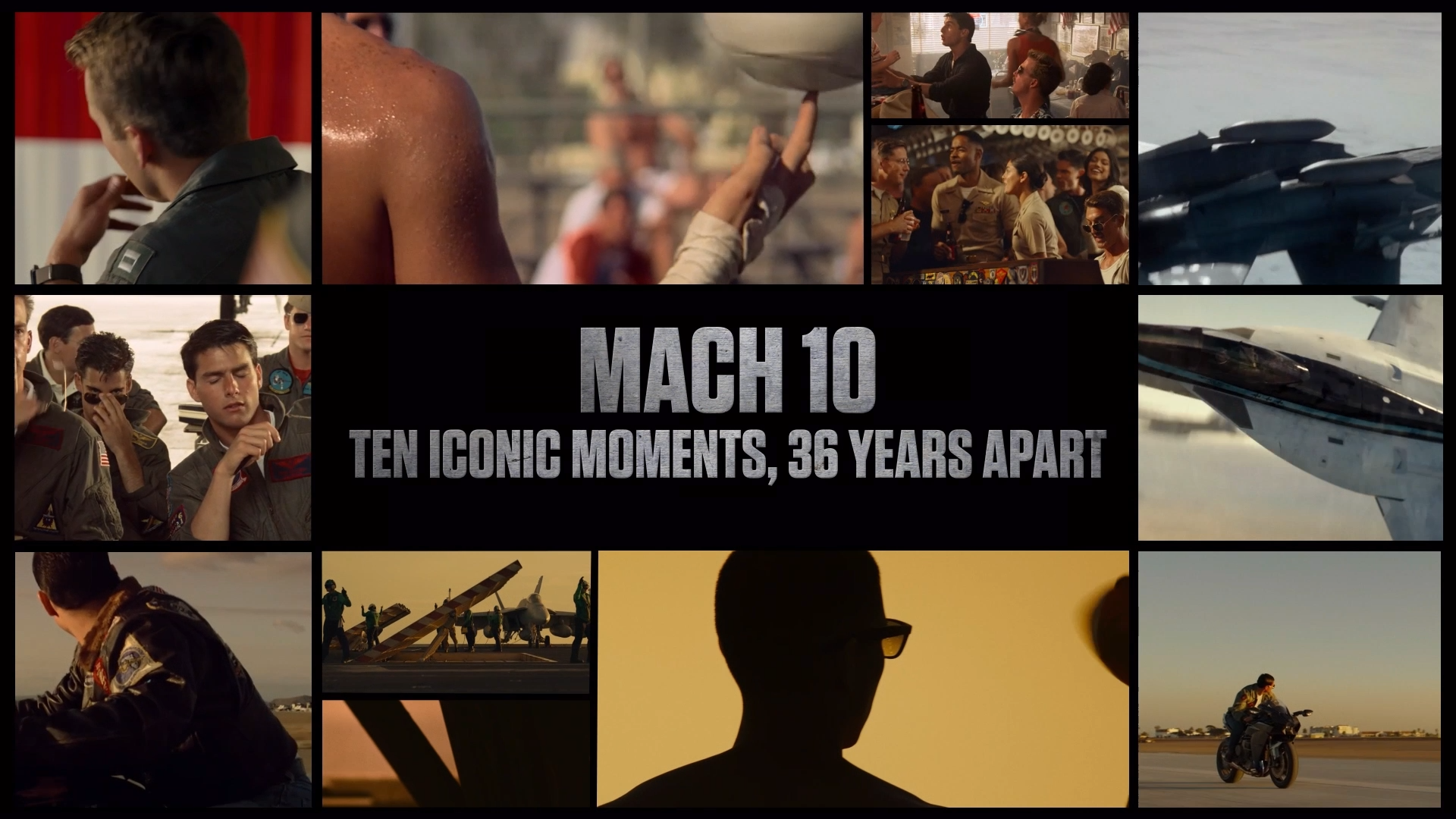 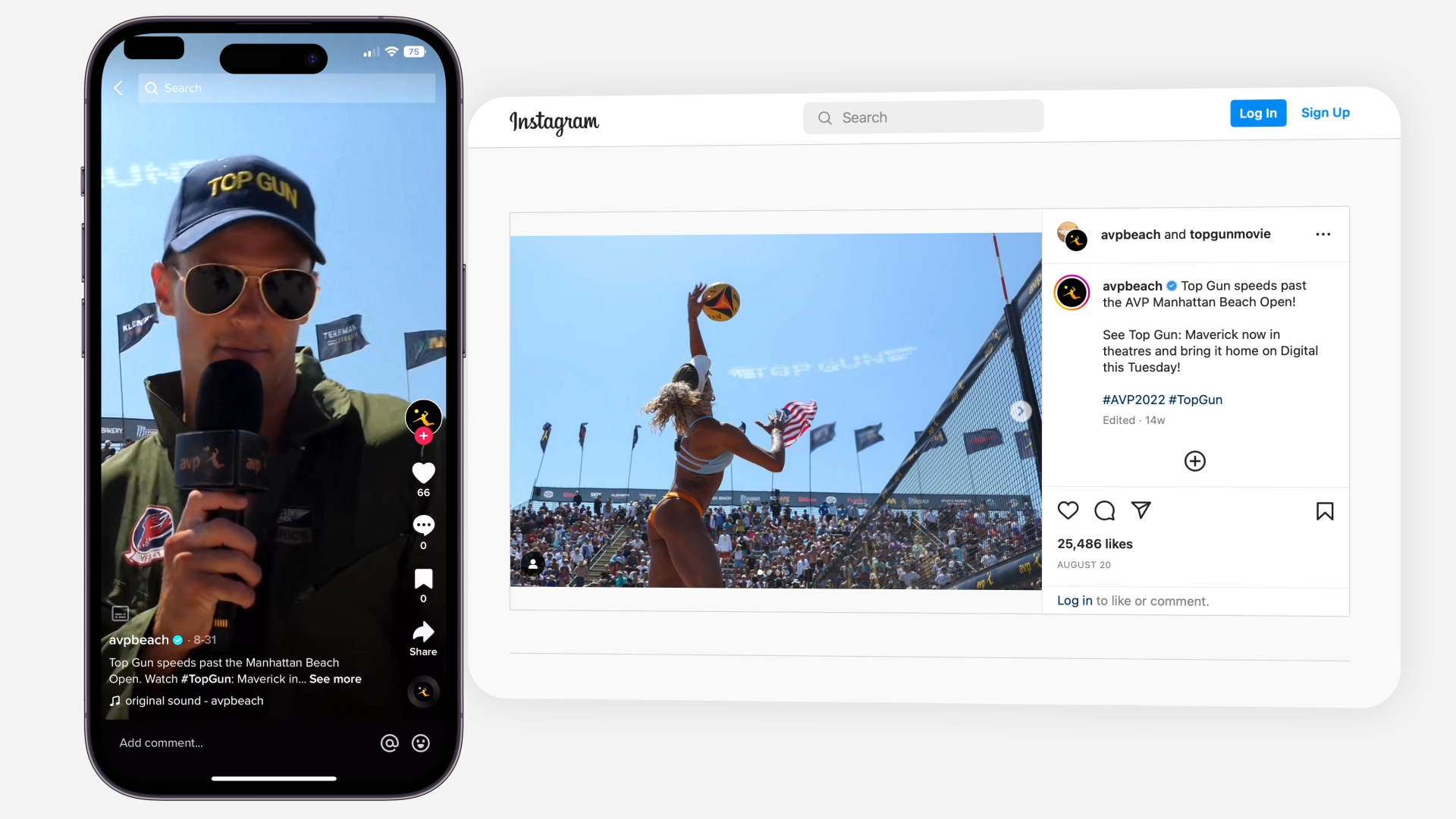 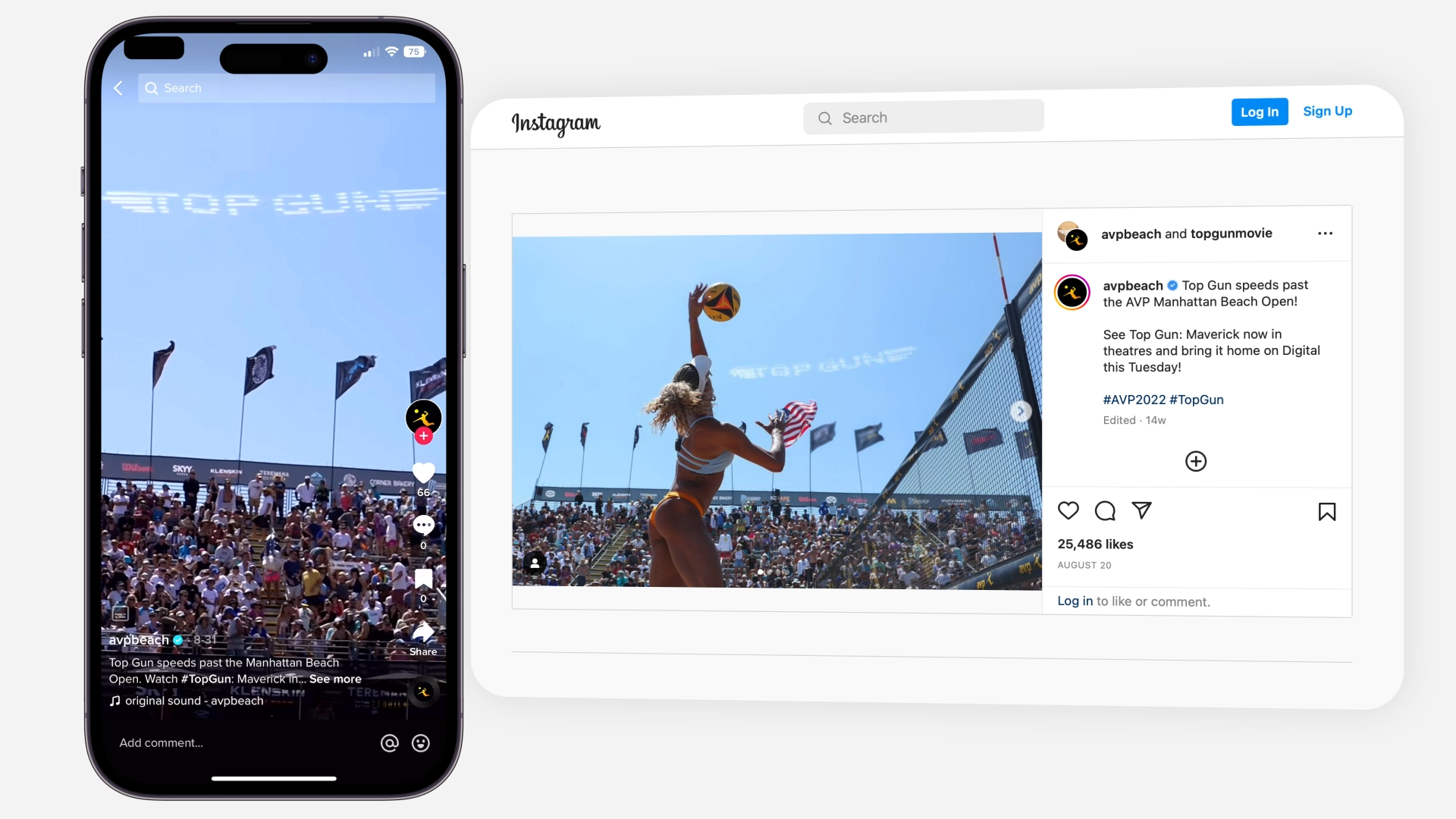 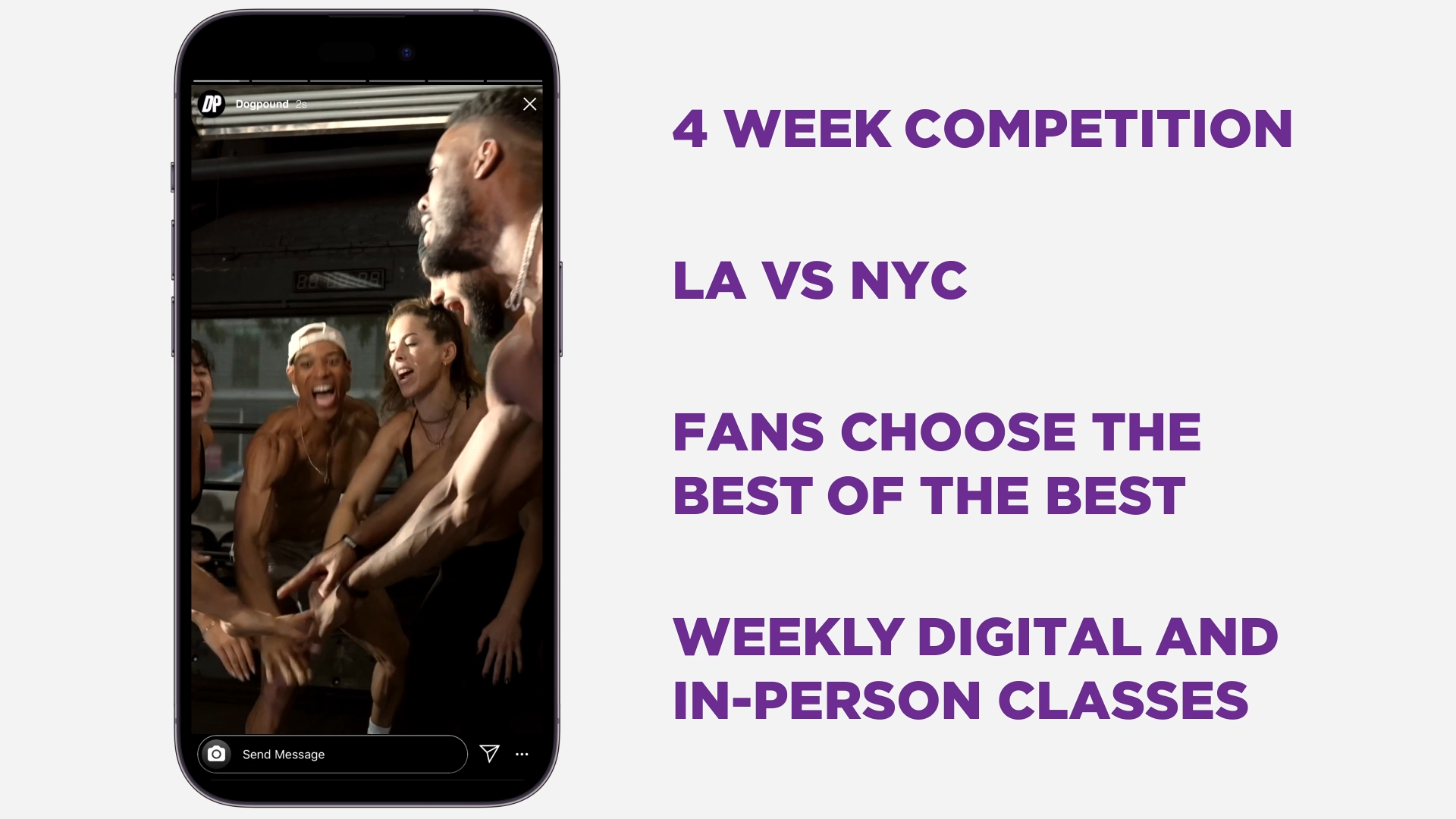 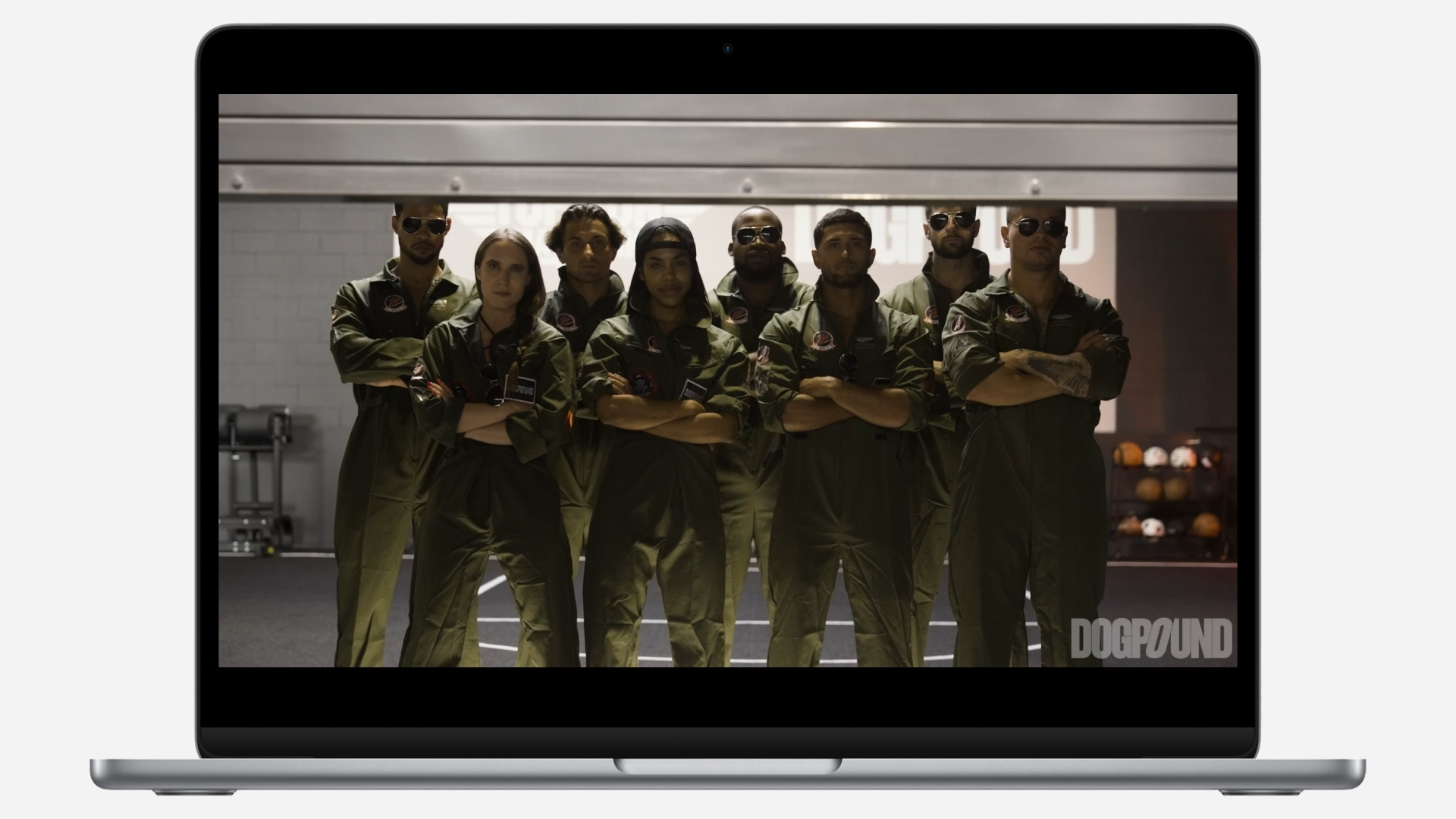 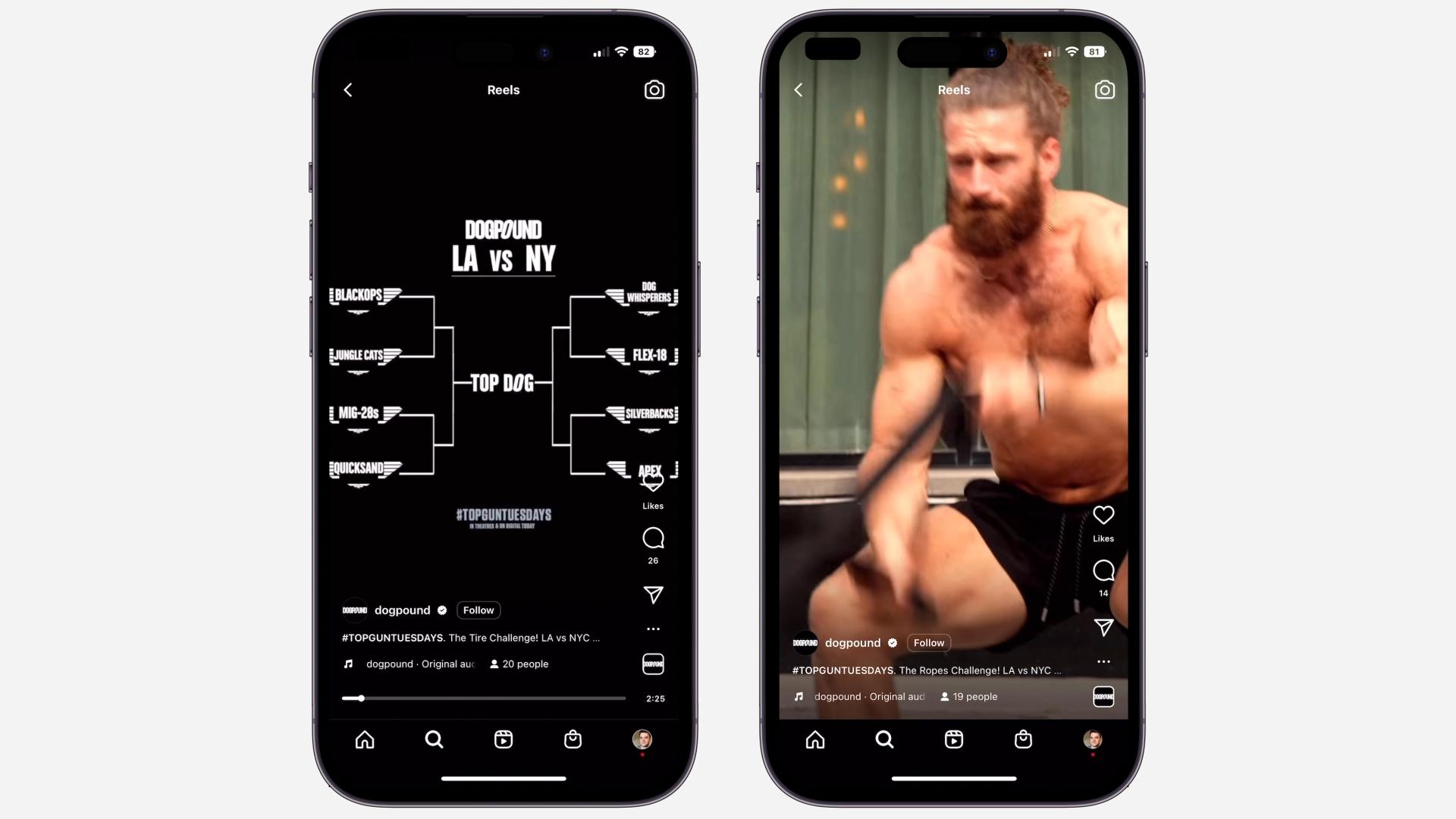 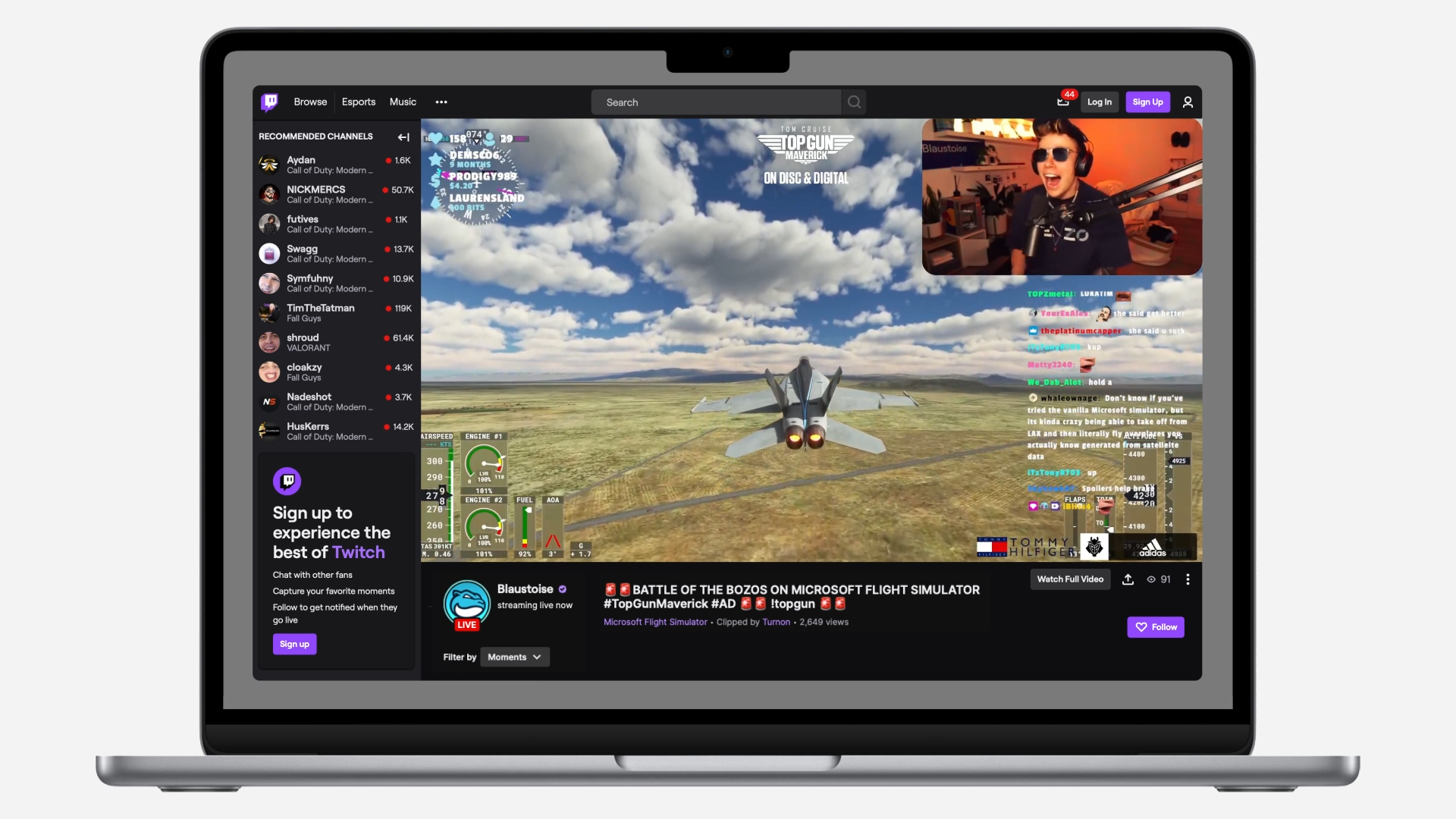 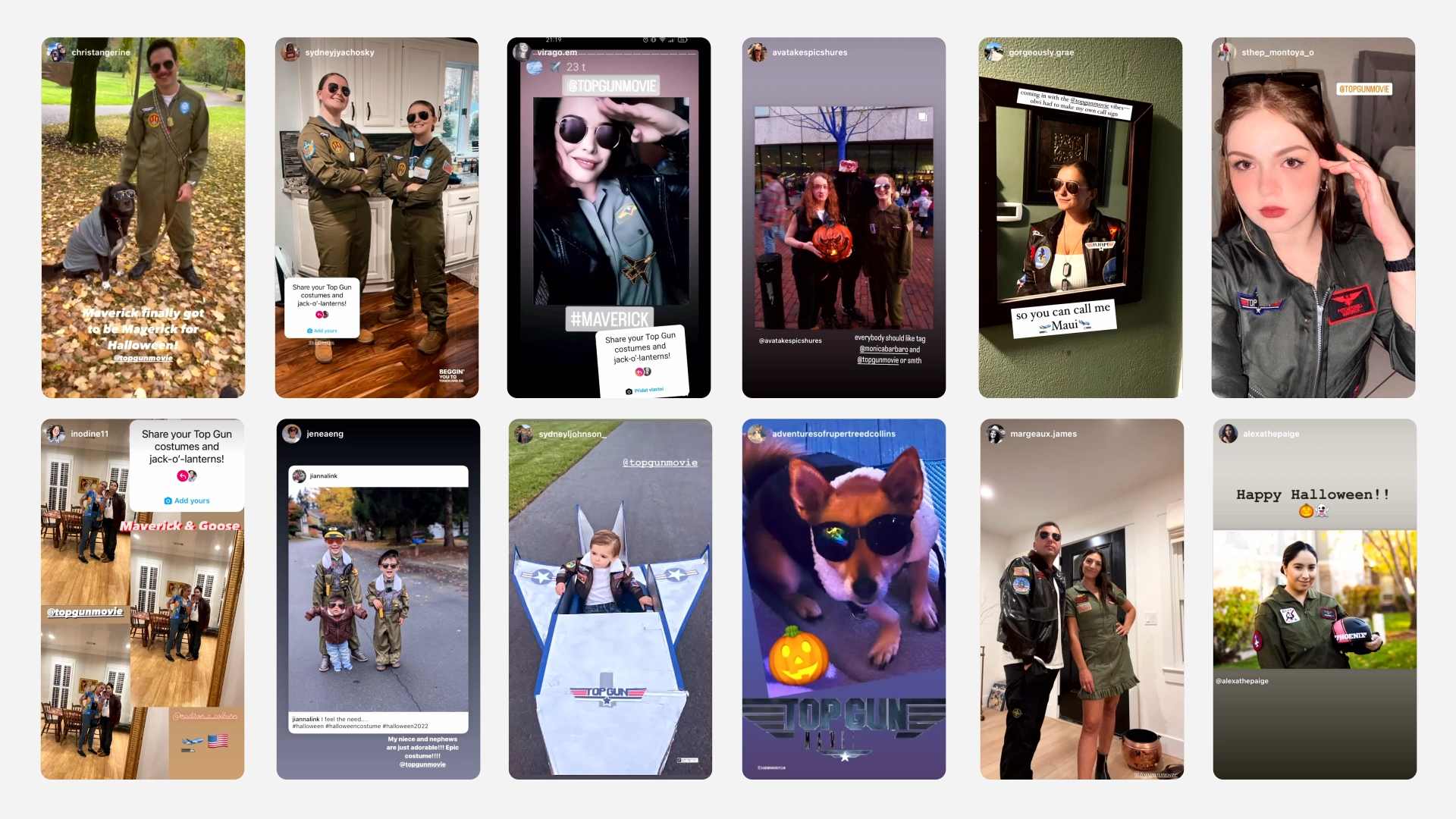 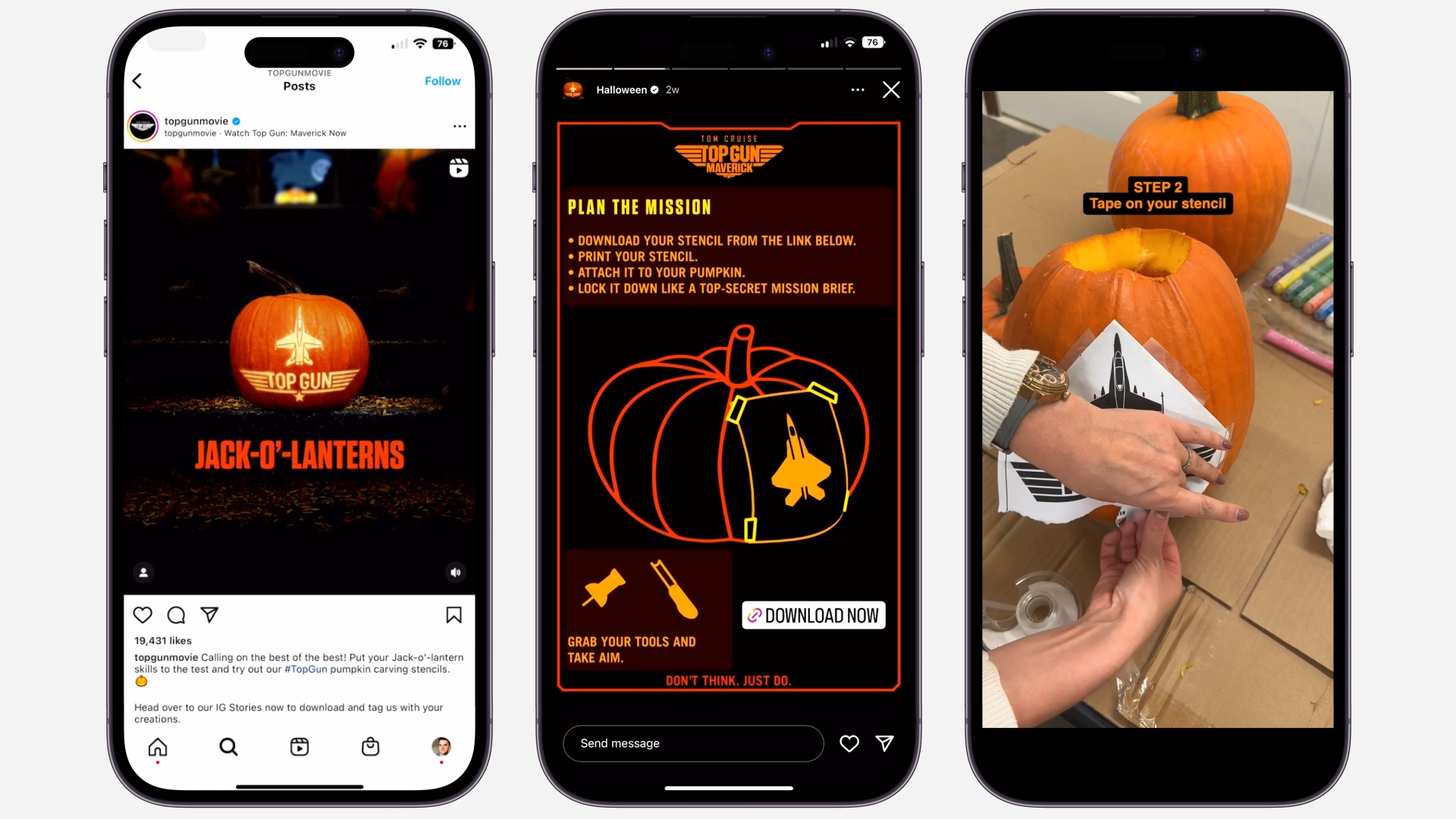