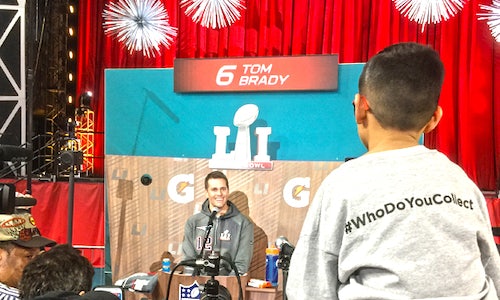 For the past four years, Panini America's Super Bowl Kid Reporter contest has been a staple in the brand's quest to continue to reach younger fans and transform them into lifelong collectors. Each year, one grand-prize winner is awarded a dream trip to the Super Bowl to cover Opening Night on behalf of Panini as well as attend the big game. Through the contest, Panini is able to bring young fans as close as possible to their on-field NFL heroes, simply by collecting trading cards. The objectives of the contest are not only to drive sales and generate awareness around Panini's NFL products, but also to highlight the brand's presence at the Super Bowl.

Beginning in April and extending throughout the NFL season, Panini's various NFL trading card products distributed through both mass retail outlets and specialty shops are inserted with Super Bowl Kid Reporter entry cards that include special codes. For each pack purchased, consumers can enter their unique code at paninikidreporter.com for their chance to win. Throughout the duration of the contest period, more than 3.7 million contest entry cards were inserted into select NFL trading card packs.

Ten finalists from the entry codes submitted are then selected at random and asked to create a brief audition video explaining why they would make the best Panini Super Bowl Kid Reporter. From there, a panel of Panini America executives and Super Bowl-winning quarterback and ESPN NFL analyst Trent Dilfer -- the Super Bowl Kid Reporter ambassador -- vote on the overall winner.

Dilfer has served as the Panini Super Bowl Kid Reporter ambassador for the past three years, and continues to generate strong positive results for the program. Once a month during the NFL season, Dilfer conducted media interviews with ESPN radio stations in popular NFL markets to discuss his affiliation with Panini and to promote the Super Bowl Kid Reporter contest.

All season long, Panini leveraged their partnerships with Dilfer and several NFL teams (including the Dallas Cowboys, Denver Broncos and Buffalo Bills, to name a few) to amplify awareness of the program across social media, turning tweets and posts into sales and contest entries.

On Opening Night, Dilfer took the Kid Reporter under his wing as they made their way from player to player to ask questions. This year, however, not even Dilfer expected what the Kid Reporter's question would result in.

7-year-old Joseph Perez from Perris, Calif., was seated on Dilfer's shoulders as he posed the question "a lot of people say you are their hero, but who is your hero?" to New England Patriots quarterback Tom Brady. An emotional Brady had to pause as he explained to Perez how his Dad was his ultimate hero.

The innocent question and Brady's unexpectedly emotional response quickly went viral, turning Perez into a hero in his own right. Panini capitalized on the momentum of the viral video, turning the conversation into a major win for the brand from a traditional and social media perspective.

Panini spent two days ushering Perez on a media tour of his own that included spots on CNN, ESPN, NFL Network, Sirius XM Radio and more. Perez's question and his exchange with Brady made it almost immediately to Yahoo! Sports and ESPN, Good Morning America, Today Show, usmagazine.com, people.com and countless global media outlets (print, broadcast, social). Brady's response was so compelling that the Zac Brown Band opened with the video during the Super Bowl Pregame Tailgate event, the NFL incorporated it into the Super Bowl broadcast and Sound FX Super Bowl broadcast on the NFL Network.

Between the lure of the prizes and little Perez's rise to fame, there are sure to be more young collectors clamoring to purchase Panini packs next season in hopes of becoming a Panini Super Bowl Kid Reporter. 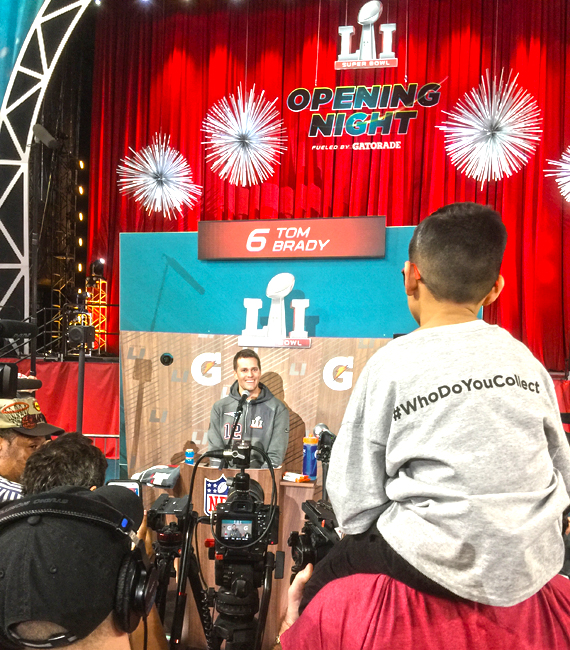