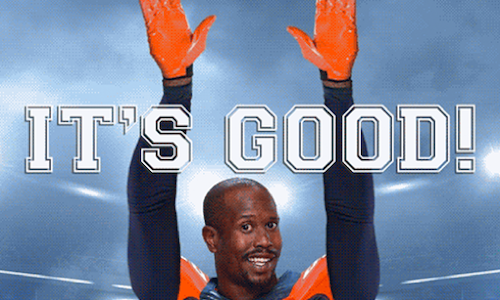 Today, brands are in an epic battle for consumer attention. 85% of consumers use other devices while watching TV (eMarketer, 2017). More channels and screens for consuming content have made it more difficult than ever before for brands to make an impact.

Old Spice teamed up with Von Miller, star Denver Broncos linebacker and Super Bowl MVP, to demonstrate that its Hardest Working Collection of products has what it takes to help guys "Stay Unforsweatable." To drive awareness that the Hardest Working Collection has the most powerful Old Spice antiperspirant/deodorants and body washes in the world, the brand needed a campaign that, like its collection, also worked harder.

To deliver a campaign that punched above its weight, Old Spice utilized unprecedented creativity, technology, sports, real-time conversation, and the universal language of the internet—GIFs. Seizing the moment, Old Spice's Live Von Air campaign reacted on Twitter in real time to "unforsweatable" moments, such as touchdowns, field goals, sacks, and halftime, to celebrate with Broncos fans during Broncos games with a GIF of Von Miller.

To win over audiences whose attention is divided by multiple screens, creativity and technology came together to deliver an adaptive campaign that cut through the noise and seized the moment.

For sports fanatics, Twitter is the go-to place for rooting on their favorite teams and players, getting live game-time updates, and talking trash as the action unfolds, all in real time. That made Twitter the perfect fit for Old Spice to reach NFL audiences, especially Broncos fans, while they're second-screening the game.

Old Spice created GIFs for each big-play moment, when people are most likely to turn their attention to Twitter. Whenever the Broncos had a big play such as a touchdown, field goal, safety, sack, or field-goal block, went to halftime, or won the game, Old Spice would deliver a GIF of Von Miller celebrating along with the game hashtag and #VonGifs. The GIFs reinforced Von Miller's nonstop hard work and the Hardest Working Collection as the most powerful Old Spice antiperspirant/deodorants and body washes in the world in an undeniably Old Spice tone.

Targeting and paid support for the posts ensured the GIFs were prominent in the feeds of Broncos fans in real time, no matter where they were in the country. To ensure the Von GIFs would be delivered at precisely the right moment, the campaign leveraged 4C Social Sync which automatically detects and triggers social ads based on sporting moments and at any level of granularity, from the athlete to the game.

By combining sharp creative and intelligent technology, Old Spice developed a campaign that captured the attention of distracted audiences.

Live Von Air achieved excellent results and demonstrated the power of creativity and technology to solve some of the brand's greatest media challenges.

The campaign, which ran from the end of September through November, achieved over 50MM impressions at engagement rates significantly better than benchmark averages. The engagement rate for the campaign was 11% above the average. User sentiment among our target was overwhelmingly positive, as Broncos fans and news outlets frequently shared campaign creative. Multiple celebrities and influencers including Jordin Sparks (American Idol), Annie Apple (NFL mom), Matt Prichard (KOAA journalist), Denver7 News, and Von himself engaged with the GIFs.

Von GIFs also saw widespread use as a play-by-play language among Broncos fans and non-fans alike.

Live Von Air demonstrated the power to make a strong impact when creativity and technology complement one another. 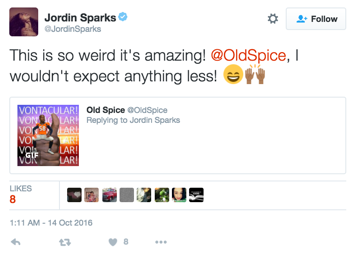 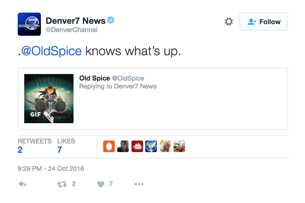 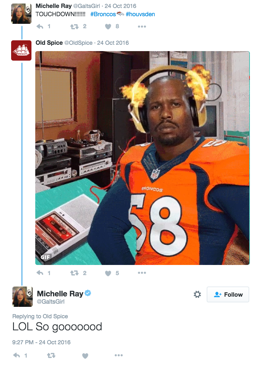 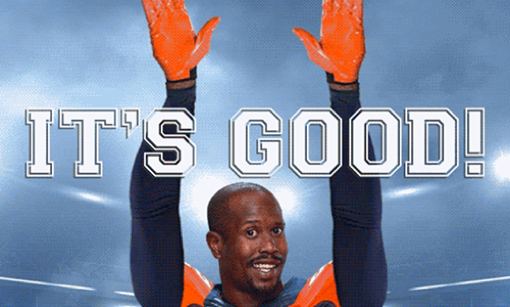