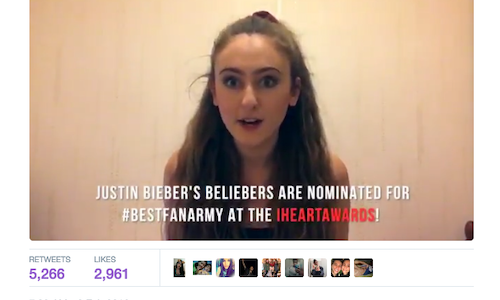 Many music award shows feature a category honoring the most dedicated fans on the planet. But in each of those shows, the award goes to the musician, not the fan group. For the 2016 iHeartRadio Music Awards, iHeartRadio decided to give a face to the fans behind the artist's success and put the control and the victory of the Best Fan Army Award in the hands of the fans. iHeartRadio achieved this goal by joining forces with the powerful Twitter community of diehard music fanatics, resulting in unparalleled social engagement for the #iHeartAwards and specifically the #BestFanArmy Award.

Before the official announcement of the 2016 iHeartRadio Music Awards, the social team at iHeartRadio selected one fan account for each of the 12 Best Fan Army nominees to serve as the official ambassador for each fan group: Beliebers, Barbz, Arianators, 5SOSFam, Lovatics, Glamberts, Mixers, Swifties, Harmonizers, Directioners, Selenators, and MendesArmy. The task: to create a fan video that would mobilize the representative's fan army to vote.

At 7:00AM on February 9th, 2016, the selected fan ambassadors posted their videos to Twitter to reveal their fan army's nomination. These dedicated fans posted moving messages detailing how the artists have affected them personally, how other fans have changed their lives or simply why their artist is the best and most loyal to his or her fans. Artists shared their respective fan ambassador's posts and in some cases even sent personalized messages.

Throughout the voting period, iHeartRadio kept in close communication with these fan accounts, offering them exclusive content, leaderboards and contest opportunities. iHeartRadio also designated 12 specific voting spree days, where the leaders of the fan groups were given the opportunity to take over the iHeartRadio Twitter account to rally their fan army by posting messages to their favorite artists and members of the fan group.

Based on vote totals, iHeartRadio narrowed down the nominees and flew the top 5 fan ambassadors to LA to take part in the show's festivities. The 5 ambassadors were interviewed by an iHeart personality and the content captured was featured across social media. The ambassadors were also invited to walk the red carpet, and were treated like VIPS as they documented their experience throughout the entire weekend.

The 7-week promotional social and voting campaign culminated with the announcement of the winner of the iHeartRadio Music Award for Best Fan Army on the live television broadcast April 3rd. The winning ambassador, Justin Bieber's group JBCrew.com, accepted the statue from iHeartRadio's Elvis Duran and addressed the fan army on national TV.

The social engagement for iHeartRadio Music Awards Best Fan Army category was massive. On the day of the announcement, #BestFanArmy trended on Twitter worldwide and in the United States. The hashtag #BestFanArmy, combined with #iHeartAwards, resulted in over 202 million mentions on Twitter which helped contribute to the 115 Billion social impressions the #iHeartAwards generated over the promotional period. It also helped #iHeartAwards become the 7th most popular music hashtag on Twitter in 2016. On the night of the awards show, multiple fan army-based hashtags trended worldwide, including #PowerOfDirectioners, #5SOSfamSlay, #NowOrNeverFam and more, reinforcing the power of the fanbases. 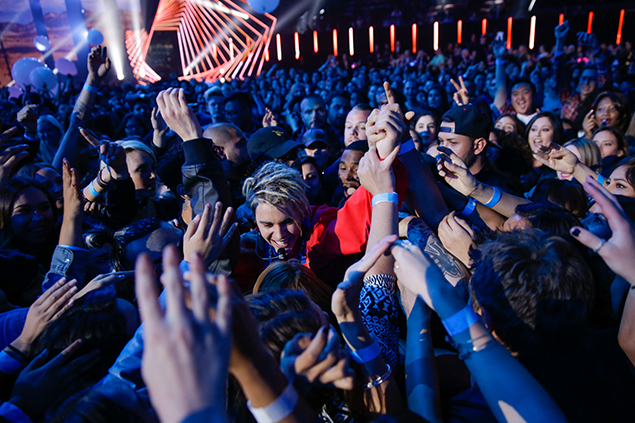 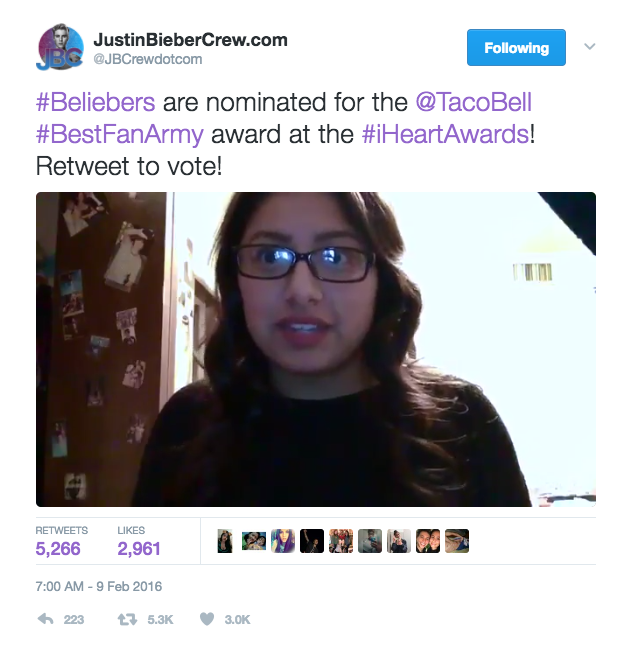 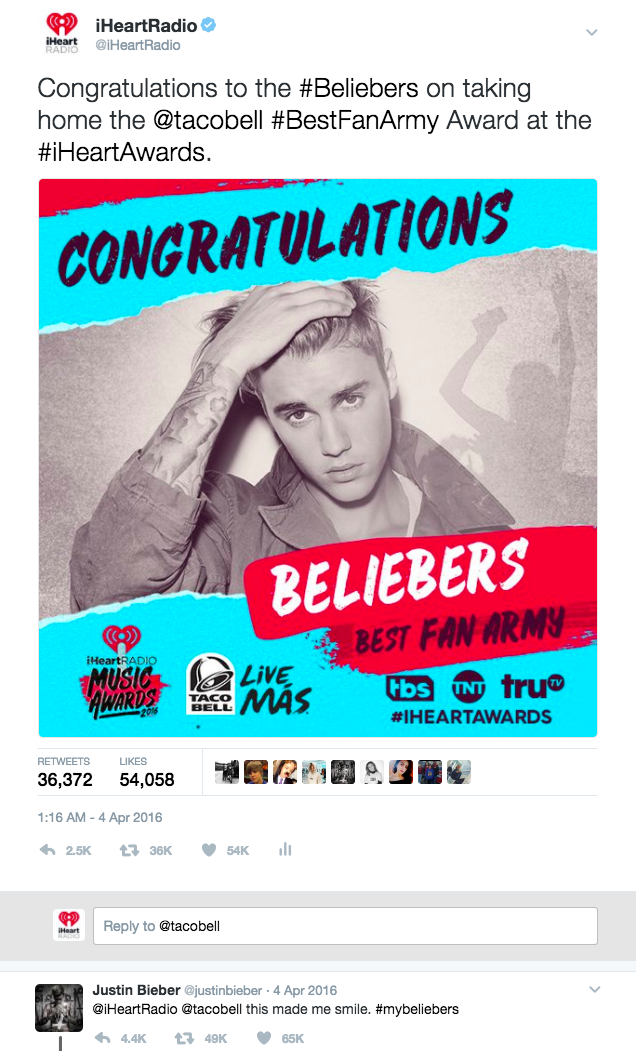 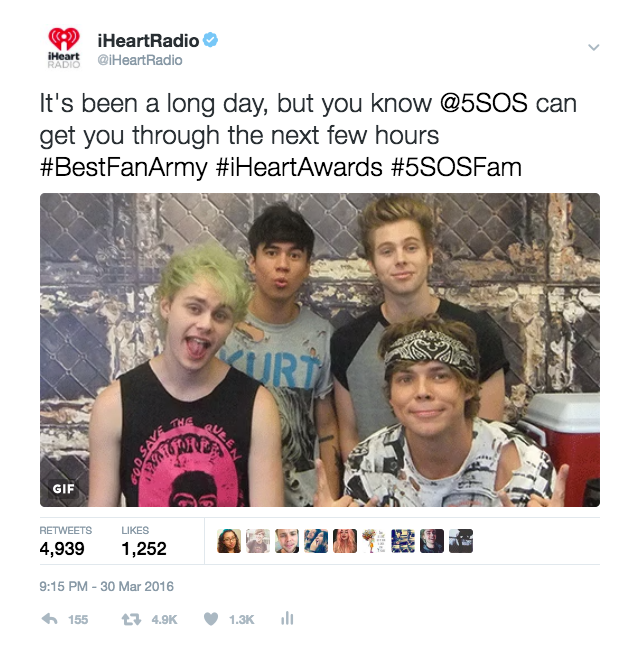 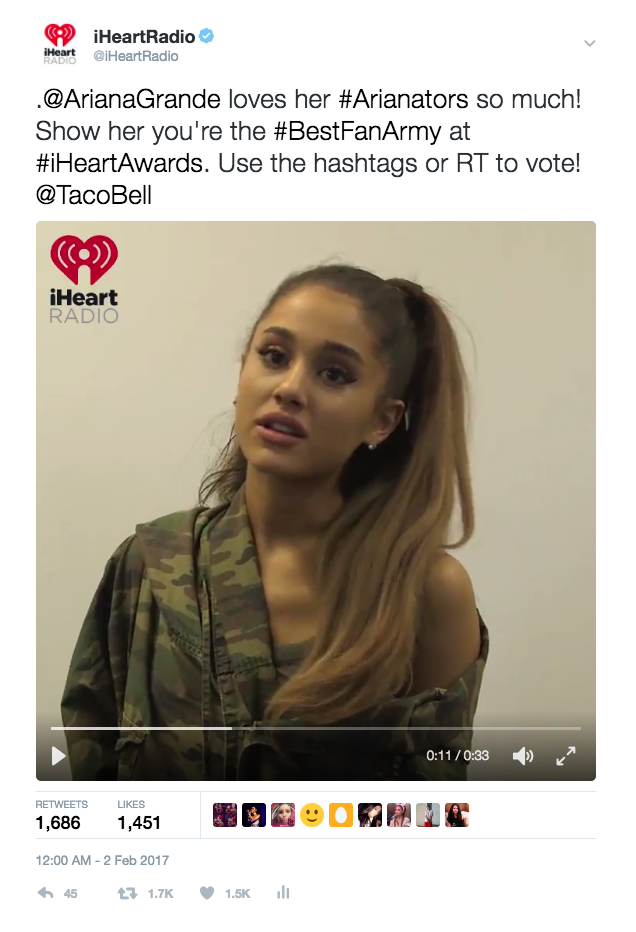