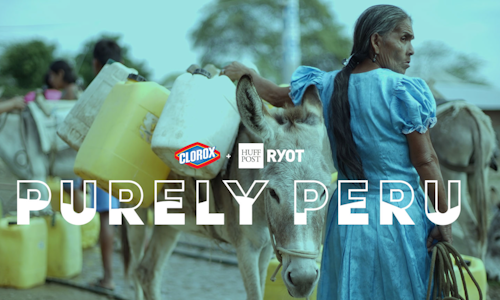 Many millennials don't know much about bleach, but believe it is really strong, harsh and unsafe to use. To get these younger consumers to try Clorox Bleach instead of other cleaning and laundry products, Clorox needed to create awareness about the safety of bleach and build trust.

Emerging technologies like VR and 360 video present incredible opportunity for inspiring social good. Clorox harnessed this power by partnering with AOL's award-winning Partner Studio and Oscar-nominated HuffPost RYOT to draw attention to the lack of access to safe drinking water and show how a few drops of bleach provide a simple, cost-effective, scalable and easily adoptable way to kill bacteria and viruses in water.

Using immersive 360 video technology, HuffPost RYOT created an experience where viewers could see what it's like to live in one of the communities in Peru being impacted by The Safe Water Project. Guided by one of the community leaders, Bernadina, viewers were shown how bleach is used as a surprisingly simple solution to purify water and how access to safe, clean water has had a ripple effect, creating a healthier and livelier community. Cutting-edge in-app donation button technology allowed viewers to show their support for The Safe Water Project.

Debuting on AOL's network, which reaches more than 500 million global consumers, the short film, titled, "Purely Peru," showcased how virtual reality can be used for global story-telling and social good. The 360 video was accessible across screens and viewers could experience the action on the HuffPost RYOT app, YouTube 360 or through a VR headset. 360 video was enabled across AOL's pre-roll, outstream, interstitial and expandable ad formats for desktop and mobile.

To promote the campaign, Clorox and AOL collaborated to conduct media outreach to marketing and tech trades, as well as local media and CSR publications. AOL also aired the video at their booth throughout CES, one of the world's largest consumer electronics and consumer technology tradeshow Las Vegas.

The program delivered 2M+ video views in just over 2 weeks that helped amplifying the social good conversation around the brand. The RYOT in-app experience allowed viewers to interact in the 360 environment and also have the option to donate to the cause.

The 360 video content resonated positively with the viewers as it drove significant lift in all 5 key performance metrics: familiarity, affinity, intent to seek information, intent to purchase, intent to recommend.

The 360 format consistently outperformed the 'flat video' counterpart in every metric. A true testament to support the immersive 360 VR technology and the brands positive impact on social good storytelling.