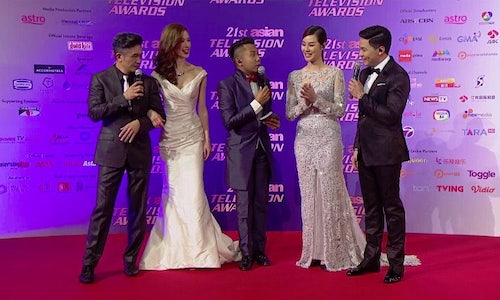 We wanted to create as much hype pre-event, during the actual awards itself and post event.

Objectives were to increase our number of social media impressions year-on-year from our 2015 awards event.

- Raising awareness of the Asian Television Awards across Asia and beyond

- Reaching out to new audiences using new content platforms such as Steller & Weibo.

- Empowering fans by letting them have a say in our content


- Engaging followers on social media pre-event & during the "live" broadcast

We drew up a blueprint to achieve these goals & objectives that revolved around the following 3 points:

Influencers from StyleHaul and Gushcloud also came onboard to provide some social love.

We partnered with social platforms Twitter and Steller, television broadcasters and the different media titles.

We engaged fans attending our "live" event and television audiences at home.

The awards is nothing without our fans. And boy did we make them work for their tickets!

We got our performers such as Amber Liu, Charli XCX, Ivy Grace Paredes, JJ Lin, Rossa into the action.

Host Alden Richards did a Twitter BlueRoom the day before and asked his fans to catch his debut at our awards. Influencers such as Singapore personality Dawn Yang and Kim Lee from the cast of The Hangover Part II also lent their support.

Visual storytelling platform, Steller, featured our nominees and the likes of Alden Richards and Rossa.

Levelling up our Followers

Ivy Grace Paredes and Rossa got fans to choose the songs that they would perform.

We also had them to decide on whether Alden Richards and Rossa should get their Twitter BlueRooms sessions and even the dress that Hollywood actress Kim Lee would be wearing.

We did Twitter BlueRooms for our nominees Bernice Liu from Hong Kong and Michael V from the Philippines. StyleHaul influencers also joined in the fun.

Our performer JJ Lin and nominee Jojo Goh had loads of fun backstage. Host Baki Zainal had a "memorable" time with our Twitter Mirror. We even squeezed in a Twitter Takeover by co-host Alden Richards.

Our integration of Twitter with live television allowed the audience to send in questions for our performers, which they answered post event.

We did boomerang posts on Instagram to add an element of playfulness. We even took time to get our hosts to do a selfie on live TV from the stage.

We livestreamed the whole show via Facebook Live and selected segments on Twitter / Periscope and Weibo as well.

Using Weibo, we focused our attention on content which would appeal to the Chinese audience. We tracked a fan's journey in seeing her idol, JJ Lin, by letting her do a Weibo takeover. JJ Lin himself also showed us some love on Weibo.

The results of the #CelebratingAsianTV campaign were simply outstanding, especially bearing in mind that we spent less than USD1,000.

Here's what we had achieved by the end of our campaign.

Our social media performance on Facebook and Twitter was especially impressive when contrasted to the performance for our 2015 awards.

To add the cherry to the cake, we were trending in second and third on Twitter with the hashtags #21stATA & #ATA2016.

The Asian Television Awards set out to Celebrate Asian TV in a big way. We're glad we managed to do just that! 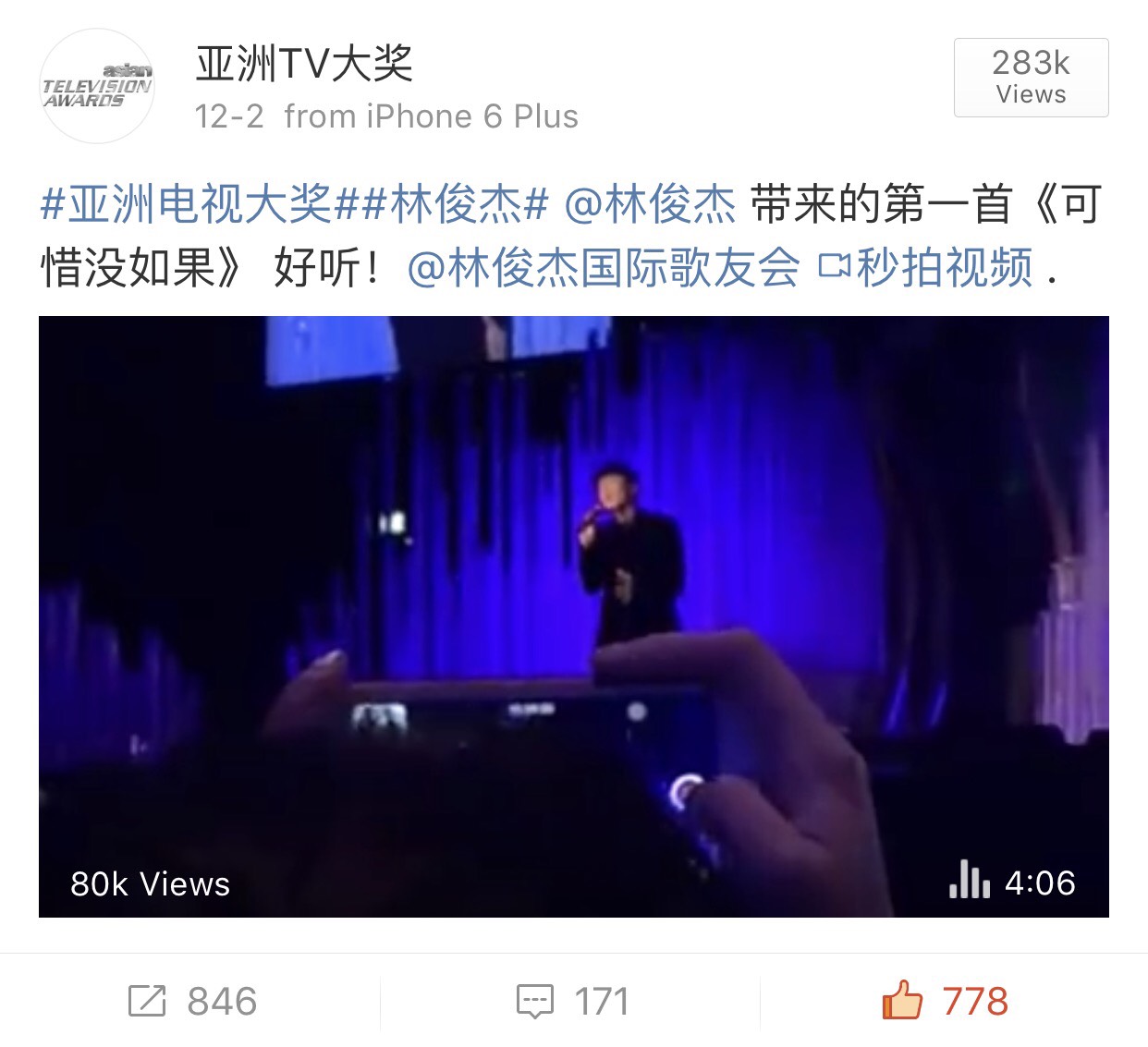 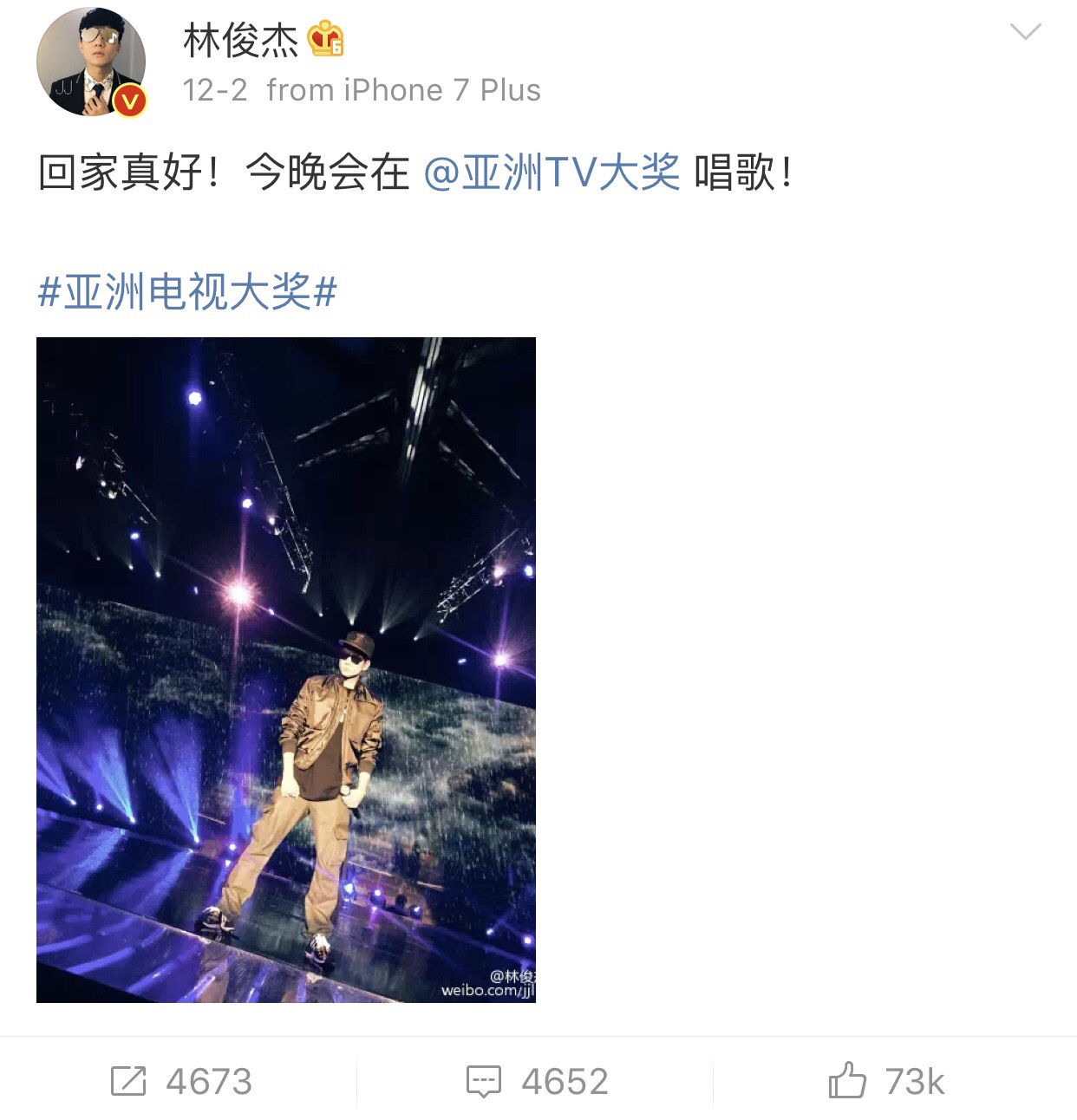 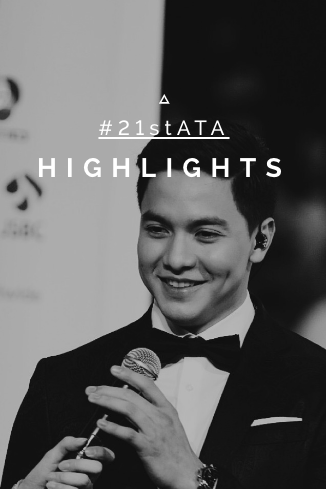 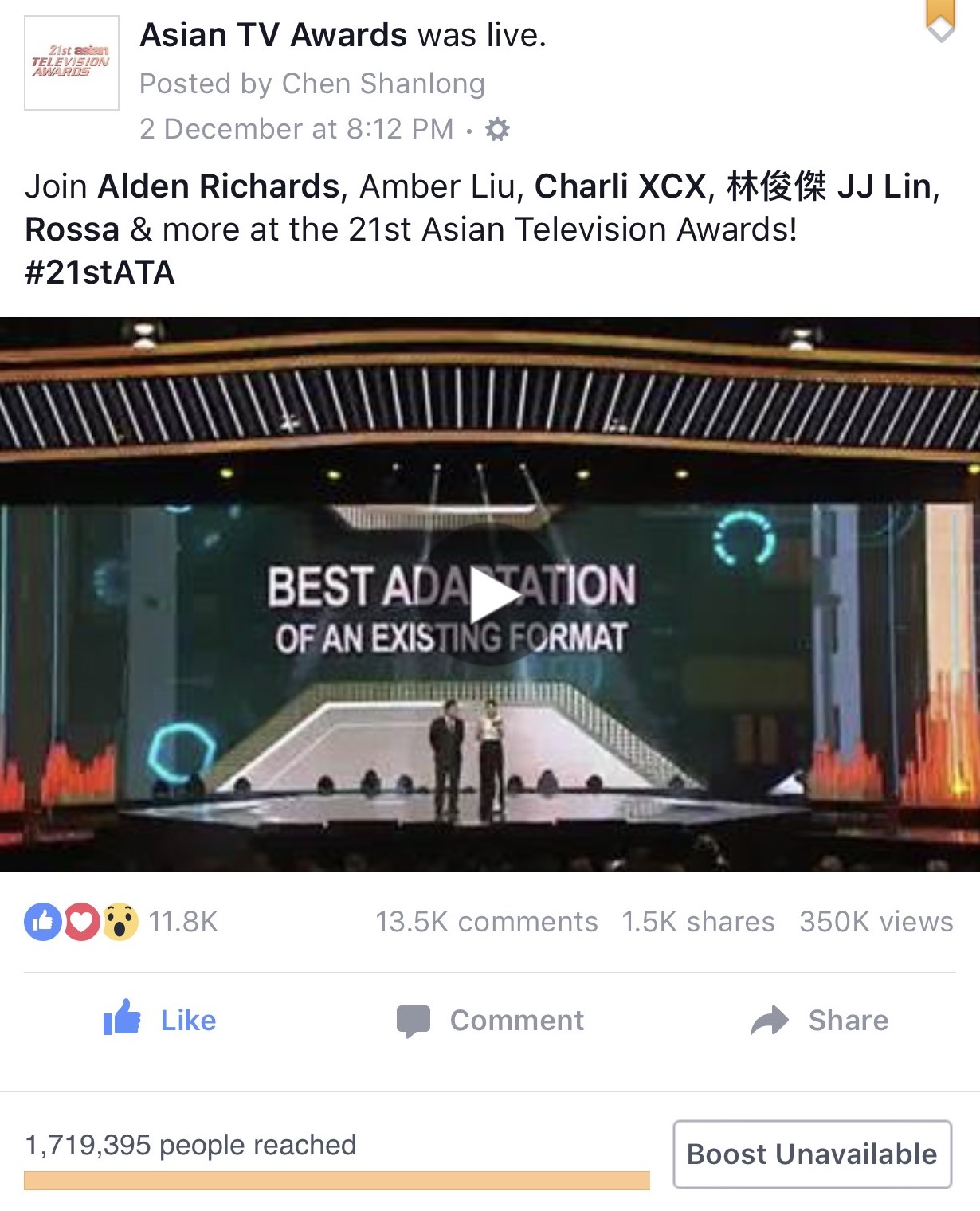 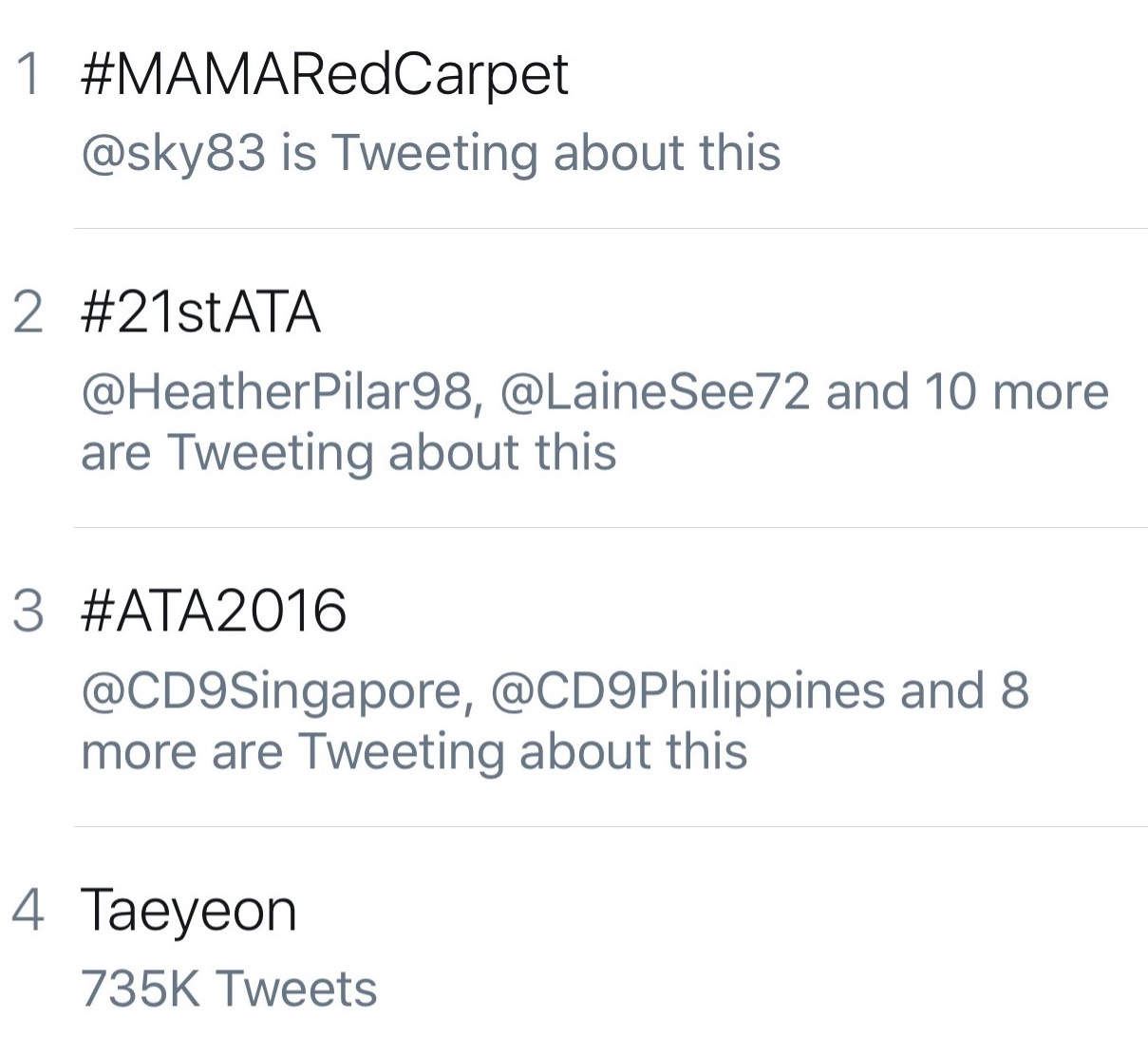 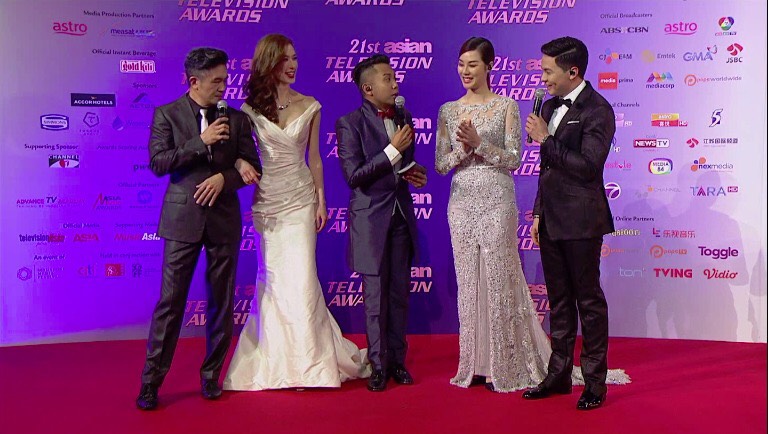