Last year, one of the finest pieces of automotive advertising in recent history hit the internet - but it didn't come from an automaker. The owner of a well-worn 1996 Nissan Maxima (and aspiring filmmaker) creatively positioned his car as a luxurious land-ship-yacht in a tongue-in-cheek ad posted on Craigslist.

Through social listening, Nissan caught wind of the ad and saw an opportunity to engage the customer and drive social conversation about the Maxima.

On the same day the ad was posted, Nissan sent a tweet to the owner with an offer to purchase the car and donate $1,000 to the charity of his choice, the Wounded Warrior Project.

Nissan then decided to put the fate of their newly purchased Maxima in the hands of automotive enthusiasts by partnering with popular car blog, Motor Authority, whose fans submitted ideas and voted on what to do with the car next. More than 400 ideas were contributed and in the end, their choice was heard: Nissan restored the car to its former glory and displayed it at their headquarters.

Nissan went back to the original owner to re-introduce the restored vehicle with a follow-up video - complete with wit and sarcasm. The video once again caught fire among digital automotive media and in social.

Nissan's response to the ad and subsequent activations generated 48 stories in the likes of Mashable, Forbes and Autoblog, and garnered more than 280 million impressions, reigniting online conversation and awareness about one of Nissan's most popular vehicles.

As one of Nissan's flagship sedans, the Maxima has long held an important place in their overall vehicle line-up. With a passionate community of previous and current owners, and a wealth of long-time enthusiasts, Nissan knew that the 1996 Maxima would resonate well with countless fans whose first car was this generation Maxima, or who grew up riding in one with their parents. By capitalizing on the nostalgic love that fans and enthusiasts shared for the Maxima, Nissan hoped to transfer some of the appreciation held for this model, and turn it into a greater love for the brand and their current line-up of vehicles.

Nissan's social listening efforts and quick decision to purchase the Maxima took an existing owner and turned him into a Nissan-lover for life. And by putting the decision of what to do with the '96 Maxima in the hands of social media and automotive fans, Nissan engendered even more engagement and advocacy. From start to finish, this effort struck a chord with automotive enthusiasts and Nissan fans alike. Here were just a few remarks about the program:

From discovery, to purchase, to restoration and finally re-reveal, Nissan had overwhelming success in generating excitement, coverage and social conversation around the 1996 Maxima. 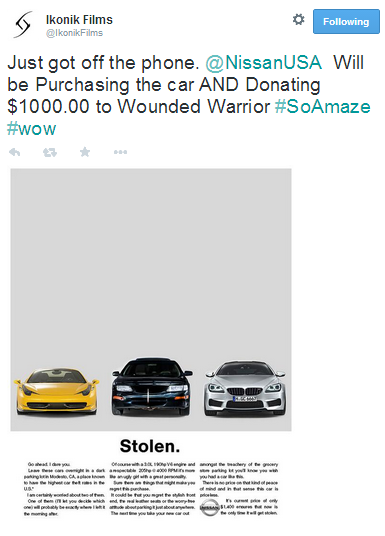 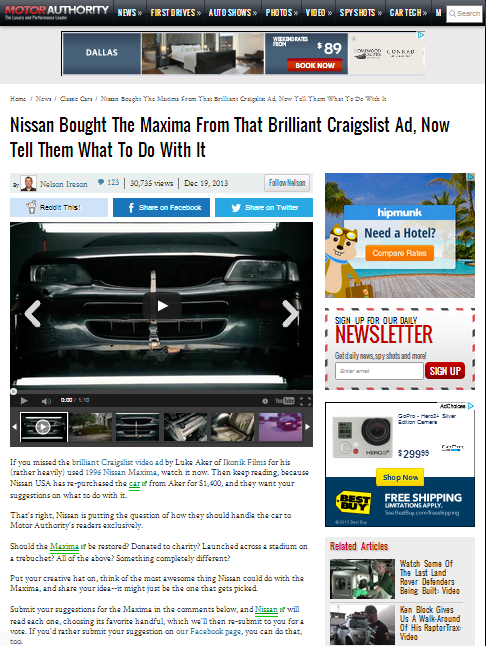 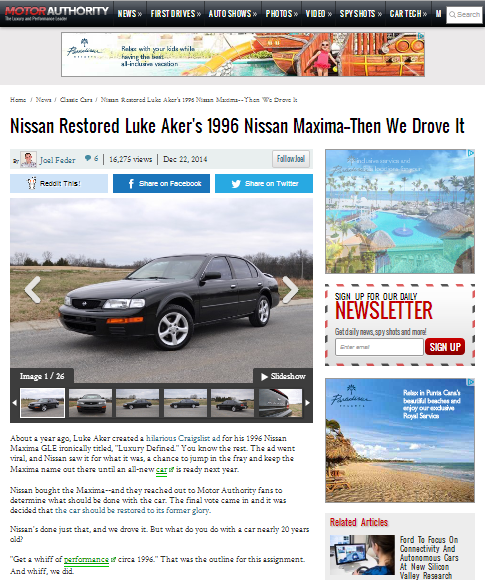 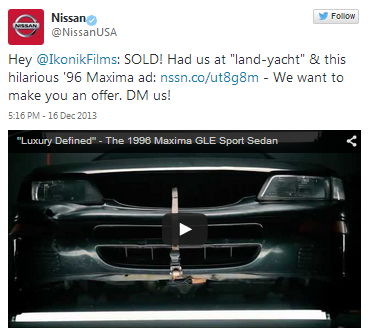