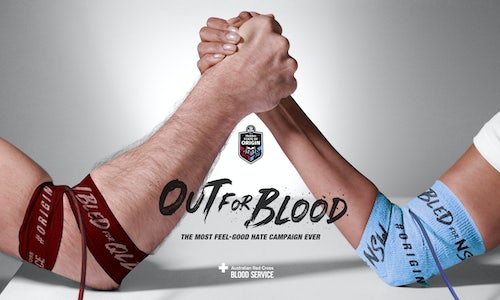 State of Origin was once Australia’s fiercest sporting rivalry—an interstate rugby league grudge match that was especially notorious for its bloody on-field brawls. But fans felt that modern rules had “softened” the game, and wanted to bring the blood back. We tapped into this misplaced nostalgia to reignite an old rivalry for a new era—to evolve the game’s cultural standing in a way that was still provocative, yet surprising and big-hearted.

The six-week duration of State of Origin allows New South Wales and Queensland fans to partake in “recreational hate”—a passionate war of words that plays out in the media, on social media, and between friends. We wanted to amplify this rivalry and connect the fight off the field with the battle on the field. Our social listening found a discontentment with the modern State of Origin game, which fans described as “soft” or “boring.” Identifying this misplaced nostalgia as a point of tension, we sought to turn it into something surprising and provocative, yet big-hearted.
“Out for Blood” also helped transform the State of Origin brand, bringing it into line with the NRL’s modern era—replacing old-school violence with new sensibilities. The NRL brand has evolved to become more inclusive and professional, while maintaining the tribal spirit of the game’s working class roots.

The mobile donation clinics were launched with events in Queensland and New South Wales, where key news media partners were invited to interview NRL talent. We launched two 15-second spots featuring veteran Origin players, each calling on their state to donate. The blood tracker was featured regularly on the weekly TV program The Footy Show. The films were posted on social channels to activate core fans and to engage key influencers from the world of sports, music, and pop culture to donate blood for their state and share the word across their social channels. The blood donation trucks toured thousands of kilometers across the rival states over the month-long run-up to the first game—with fans receiving “I BLED FOR NSW” or “I BLED FOR QLD” bandages—with local PR support. Digital display and OOH helped drive awareness, and in-stadium signage brought the fight to the field for live game broadcasts.

The campaign returned the State of Origin rivalry to the national conversation in a big way, reframing the rivalry beyond old-school violence. With national coverage across TV, print, online, and social channels, the campaign achieved outstanding ticket sales. Most important, we received a total of 831 pledges to donate blood (QLD: 402; NSW: 429), saving a total of 198 lives. 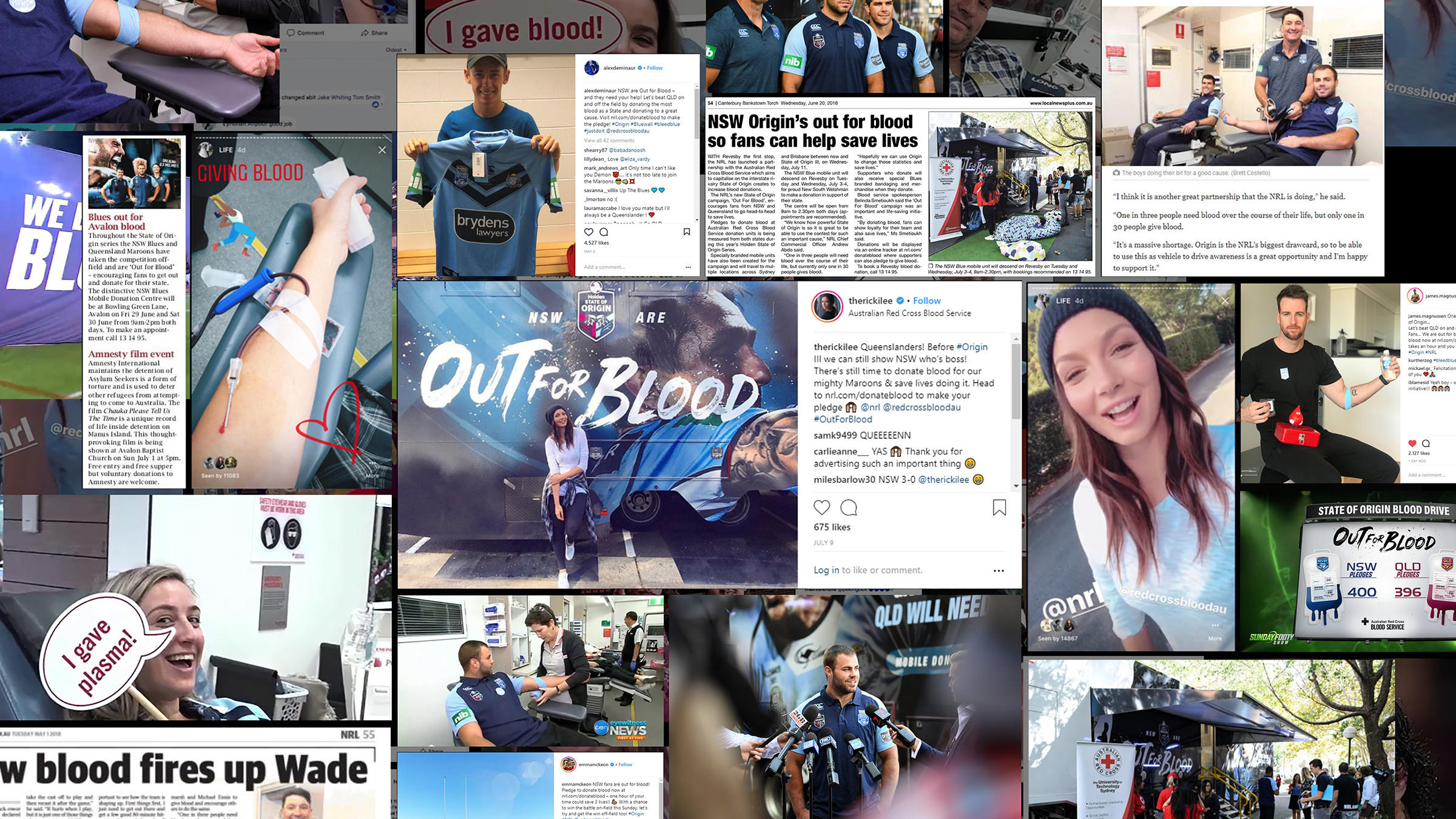 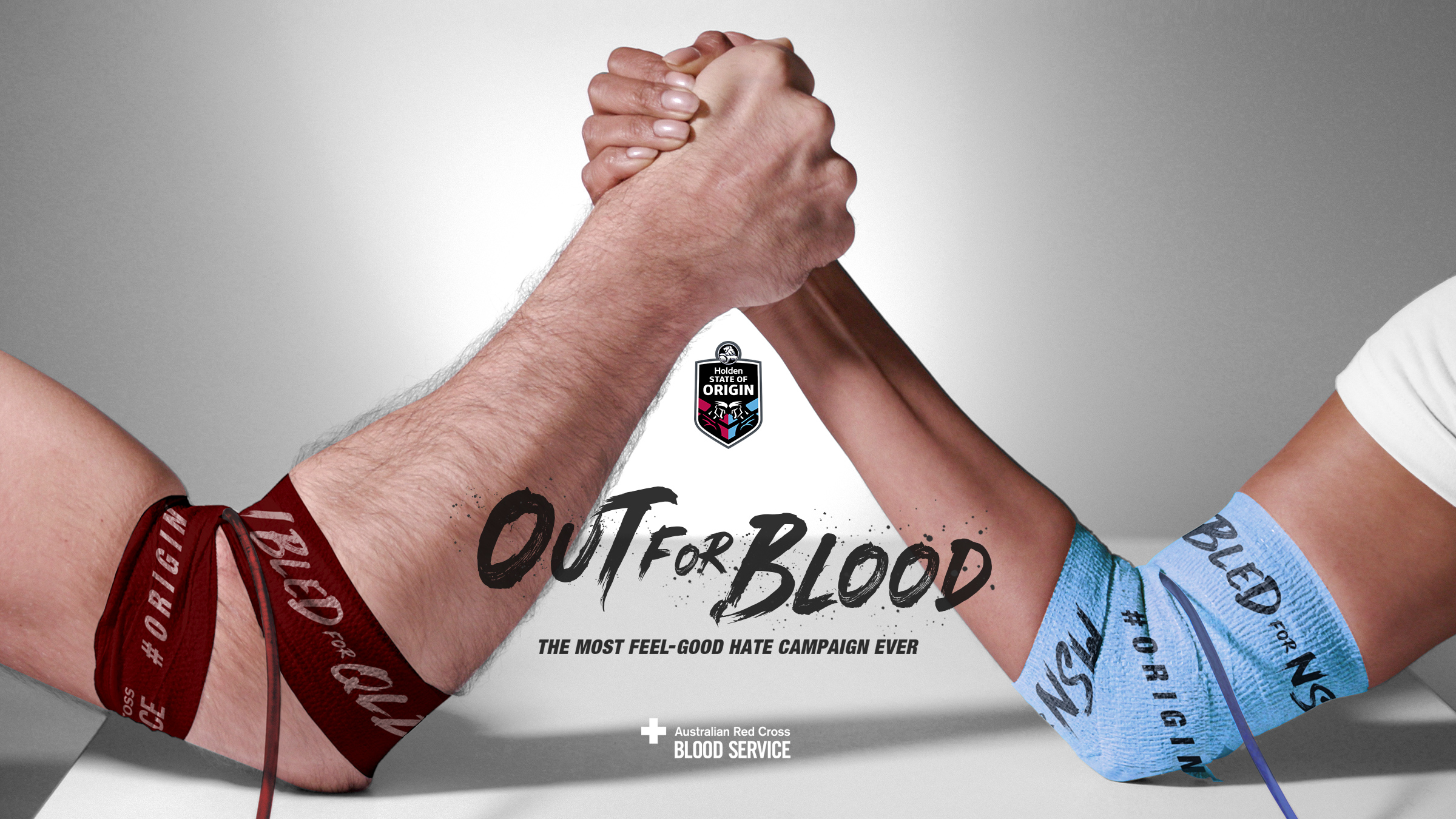 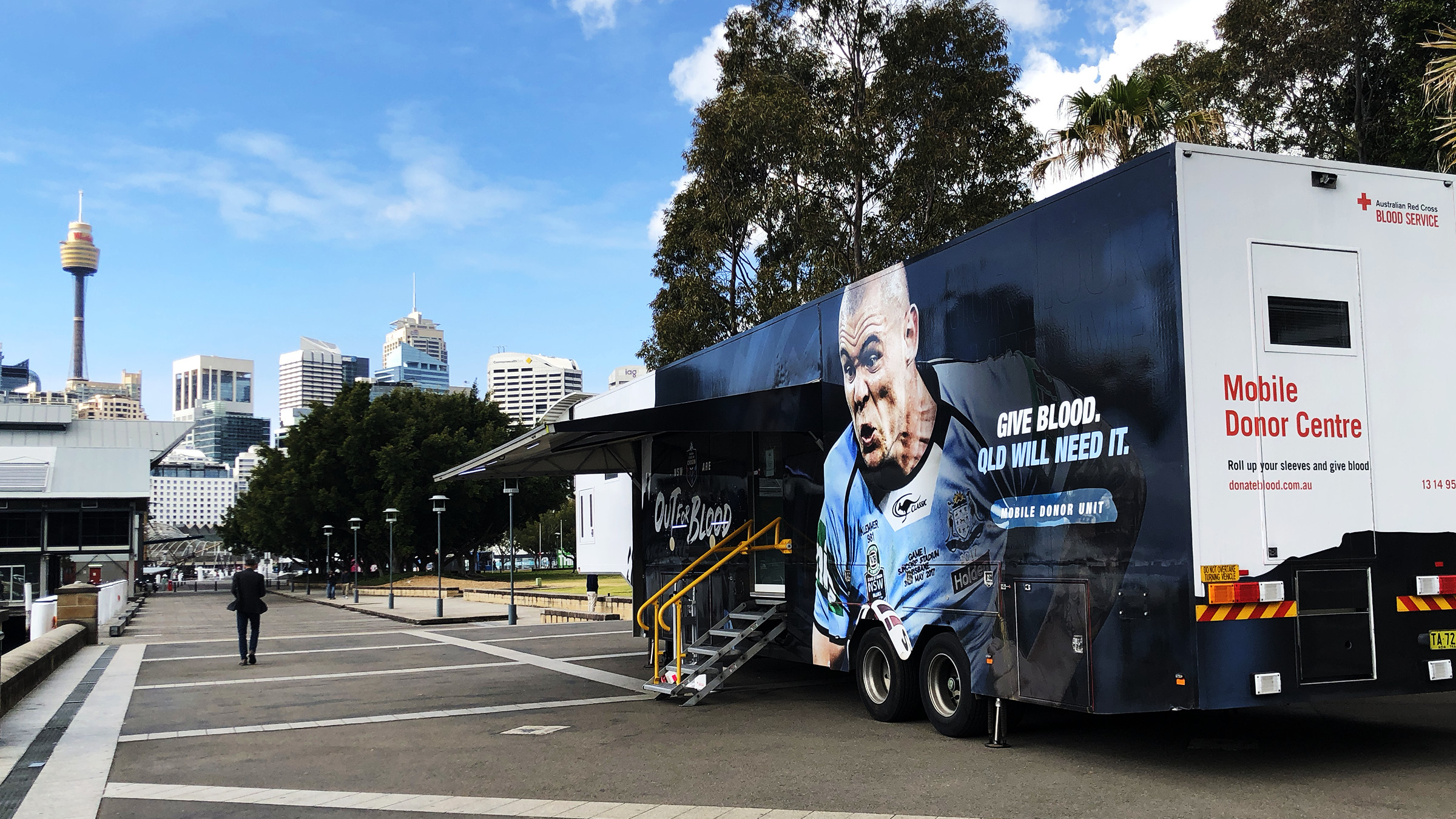 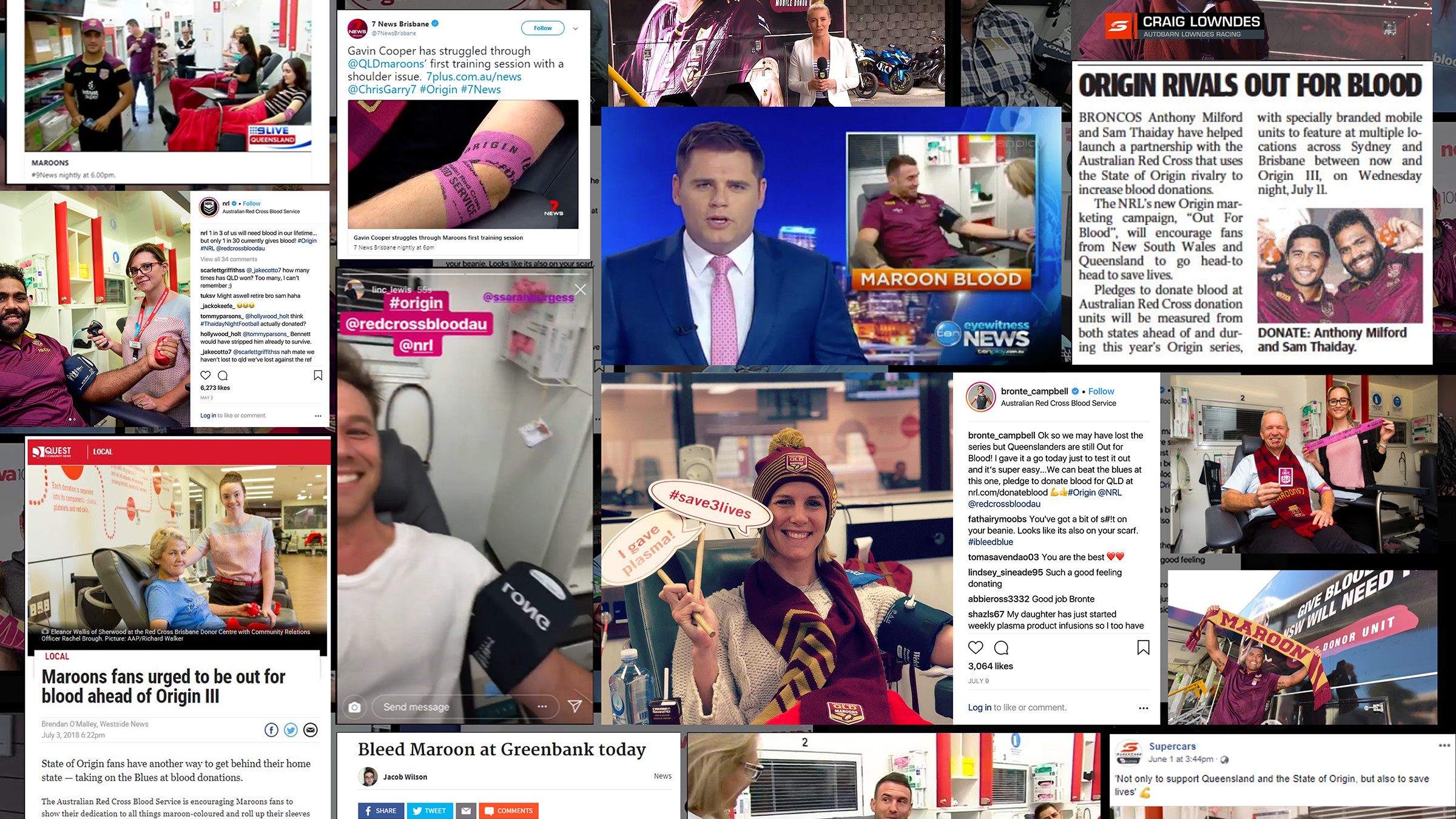 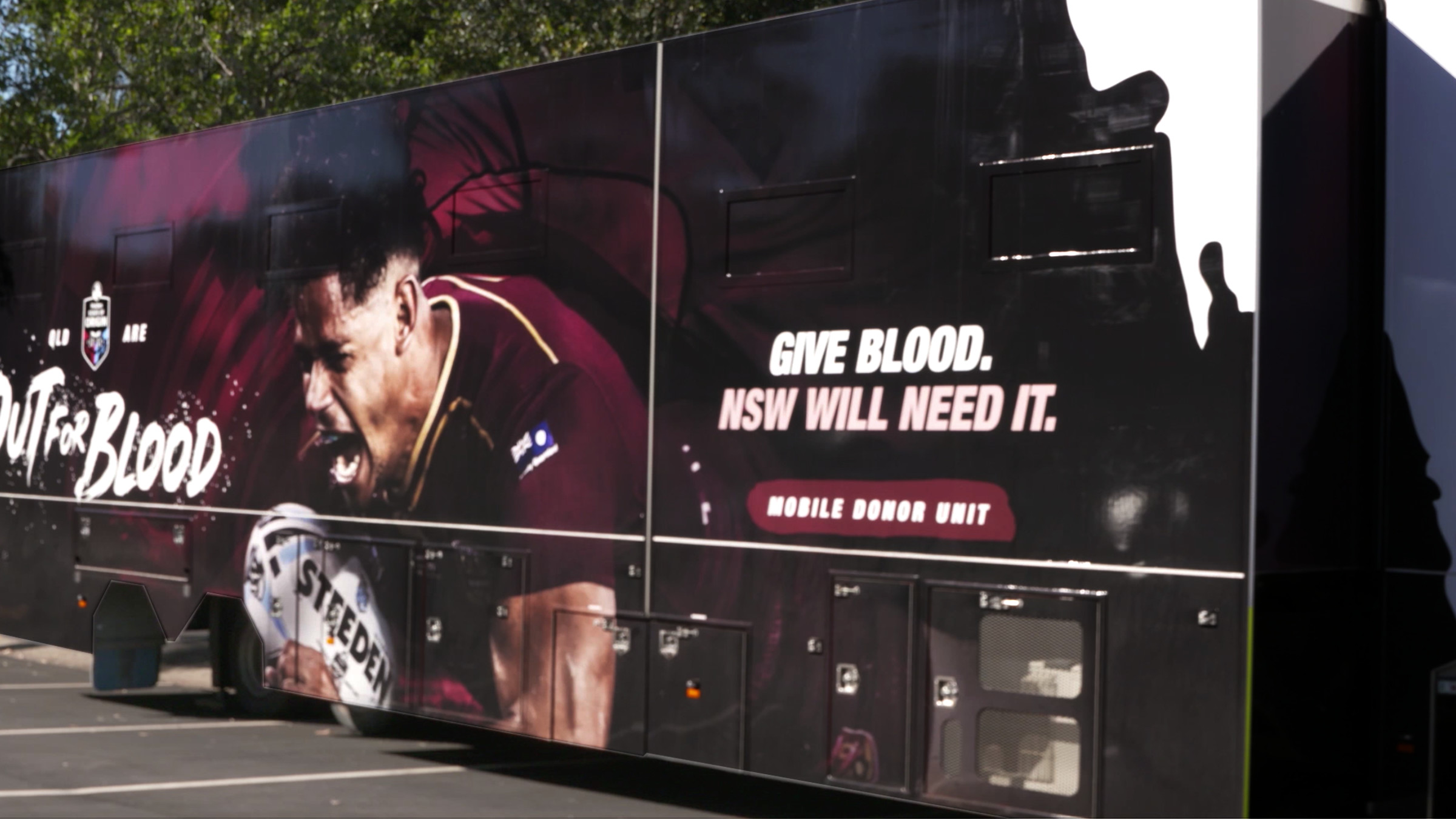