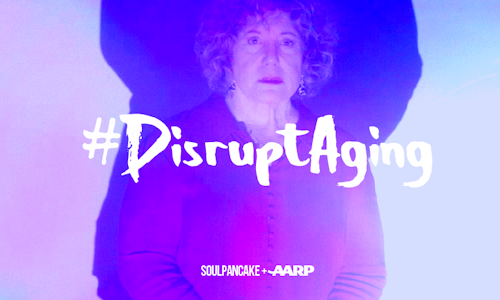 As part of their "Disrupt Aging" campaign, AARP partnered with SoulPancake to produce content that ccould create a movement and ultimately show that age is trule just a number. The hope was to create a series of videos that emotionally connected people, and brought them together to talk about aging in a different way.

SoulPancake excels at breaking down complex or uncomfortable issues by creating emotionally resonant content that is both relatable and relevant.  With this campaign we wanted to approach the conversation around aging through the perspective of a common, yet somewhat insidious phrase... "for her age."

With the focus on changing the conversation about aging, the "For Her Age" video showed a group of various aged females pictures of celebrity women and filmed their reactions to the images. We then had them self reflect on their diferent responses and the stereotypes they used themselves. That self reflection was valuable conversation for the initiative of the campaign, and got both the women featured in the millions of viewers rethinking what it means to qualify a  statement with the words "...for her age."

The campaign received over 13 million impressions, more than 4.8 million views, and over 80k engagement from women and men across the United States, who engaged in meaningful conversation and discourse about aging.

Video for "For Her Age"