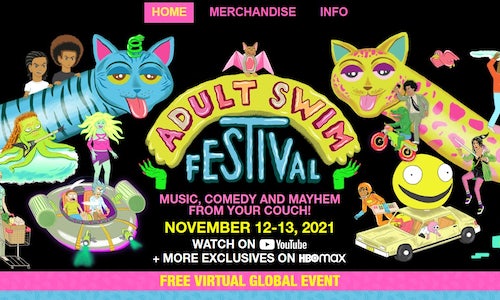 This year’s Festival had to out deliver and outdo every expectation from last year.  More performances. More live panels. A larger global audience.  Much bigger production values. Months of pre-production planning went into conceiving the music production and entertainment segments.  Live productions were planned, shot with extensive remote multicamera crews, then transformed by talented post-production artists. This year’s Adult Swim Festival would be a mind-blowing extravaganza featuring nearly 3 dozen performances.

Live experiences that surprise, delight, and create mind-blowing spectacle are at the core of the Adult Swim Festival. Enlarging this virtual Festival into a truly global event that lived up to this live spirit required a daunting commitment: make it all original, participatory, globally accessible, surprising, and most of all, fill it with WOW events.

YouTube is the festival’s live-stream hub, with all artists and performers licensed for that platform.  Live Twitch streamers have always been permitted under fair-use to watch and comment on the live performance they are watching. A small number of influencers hosted co-streaming ‘Watch-along’ events in 2020.  This year’s Festival set out to build a network of Co-Streamers to dramatically enlarge the live global festival.

Adult Swim used months of lead time to collaborate with artists and present big, ambitious multi-media productions for this year’s performances. Performers and designers were given the opportunity to take chances, follow their own visions for virtual performances, and create epic-scale productions specifically made for the Festival. In total, 28 artists and their teams worked with Adult Swim to create over 24 hours of new exclusive content.