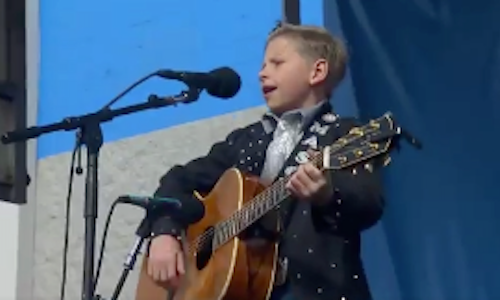 Walmart stores are an inviting place where everyone in the community is welcome to shop. To build positive perception of our brand within the social space, we've focused on looking for opportunities to engage our audience in culturally relevant moments. Walmart had the chance to amplify one of these opportunities that connected the in-store community to our social followers…through yodeling.

While reviewing our social listening tools, we discovered a video featuring a young boy yodeling at his hometown Walmart store in Harrisburg, IL. A customer shared a video of Mason Ramsey, the yodeling boy, on Facebook where it began to garner engagement.

Soon after, DJ Suede released his now famous remix on Instagram. Our team loved that this video engaged people across the nation with a musical mix of genres that drew interest across many cultures and demographics.

We decided to make a big bet on this engagement and quickly moved into action to throw a concert for Mason Ramsey and DJ Suede. We activated on multiple strategic tactics to drive strong buzz for this event across media outlets:

- We worked with the Harrisburg, IL Walmart store to host the concert and stream it live across our social channels. This was no easy feat, as WiFi signals in the rural area of Harrisburg, IL were intermittent at times and threatened to disturb the livestream.

- We promoted the livestream event by engaging social users with #YodelChallenge, which asked users to share their own best yodel.

- We engaged local and community officials to help facilitate the event and activated local partners to swarm the town with posters and information about the event.

- After reaching out to our partners at The Ellen DeGeneres Show, Ellen invited Mason to be a guest on her show the same week and Mason was able to plug the concert to Ellen's sizable television audience.

- During the concert we engaged with celebrities and influencers talking about Mason's mad yodeling skills in real-time.

- We created a Snapchat filter featuring a caricature of Mason Ramsey yodeling and shared it with our followers ahead of the concert.

Social users were quick to respond and share their love for Mason's talent. Our initial tweet sharing word of the concert and featuring the video of Mason yodeling in store inspired an incredible 63K favorites, 15K retweets and 650 replies, and ended up being one of our most engaging tweets of 2018!

We engaged with influential social users and brands such as Kacey Musgraves, Kelsea Ballerini, Paris Jackson, Mike "The Situation" from Jersey Shore, Doug the Pug, the Boston Red Sox, the Sacramento Kings, Party City, Little Debbie, Vice and Nylon Mag on their love for Yodel Boy.

Our 20 minute livestream of the concert on Twitter and Facebook inspired a total of 3.4M viewers, over 5M minutes viewed.

Across our social posts and our Yodel Boy Snapchat filter, we inspired over 853K engagements and nearly 40M impressions!

On top of that, we received press coverage of our concert from top media outlets including Billboard, TIME, Thrillist and The Washington Post.

In the span of one week, we amplified the reach of a trending, brand-related video and constructed a real-time event to actively engage our customers across social.