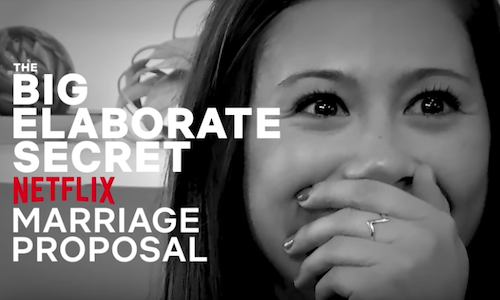 Conor and Kamela's five year long love story began with their first date, which consisted of watching Netflix! So it was only right that Conor pop the big question with the mega streaming service in mind. That's where we came in — to help plan the perfect Netflix proposal! Our core objective was to create a shareable, global, brand-love moment for Netflix by leveraging talent, super fans, and building warm and fuzzy feelings around the holidays (and beyond).

After Netflix began talks with our protagonist, Conor, we needed to find an angle that would allow us to rope Kamela in, without raising any suspicions. We created a detailed backstory; making her believe that she was going to be a part of a new Netflix reality show, Couple's Couch. We were able to keep the rouse up from development to execution by setting up "casting calls," asking her to tell us about her and Conor's relationship. We created custom props (stickers, signs, crew shirts) all reading "Couple's Couch," to keep up the rouse that this was for a new Netflix reality show. Once we learned that Kamela's favorite show on Netflix was Santa Clarita Diet, we immediately tapped the SCD team to help us stage the perfect proposal! The web of lies thickened, when we flew Conor out to LA from Austin, TX film a video with the show leads, Drew Barrymore and Timothy Olyphant. This video would eventually serve as the primer in the final piece. We staged the "pilot episode," which was really the filming of their proposal! With this guise we were able to film the entire experience - every reaction was genuine, exciting, and had the whole team in happy tears by the end!

Our hard work culminated with a 3 minute video that captured "The Big Elaborate Secret Netflix Marriage Proposal." Our objective was to create a shareable, fan-love moment for Netflix, which we achieved across social platforms. The piece was live on the Netflix service and posted on Facebook and Youtube, garnering more than 14M views, 80k shares, and 23k comments. The viral video was featured on more than 30 broadcast outlets and gained the attention of prominent press outlets such as Mashable, Huffington Post, Glamour, Refinery29 and more. Overall, our happy couple was celebrated around the world with even happier fans who fell even more in love with Netflix.

Video for A Netflix Marriage Proposal 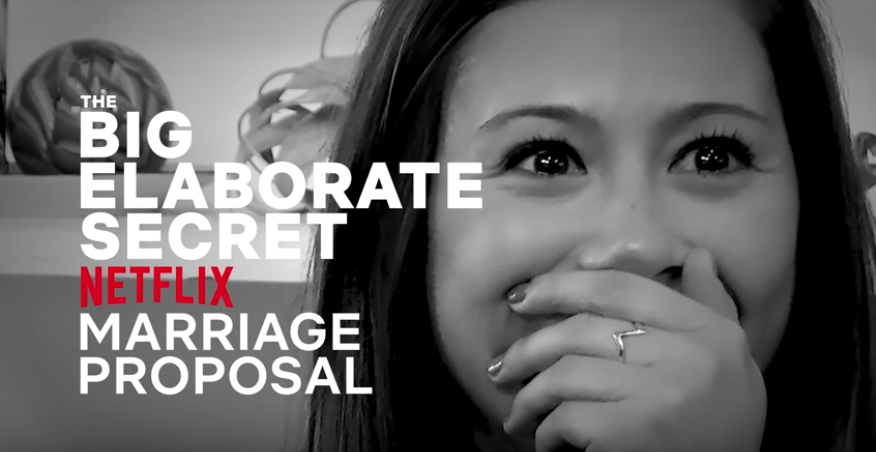