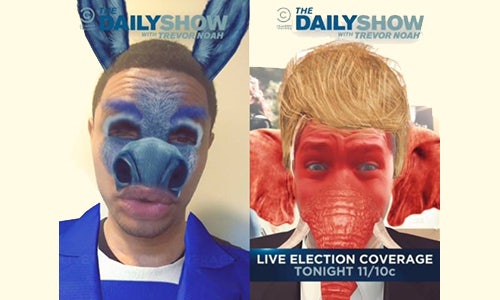 The main objective of this election Snapchat lens was to raise national brand awareness and drive viewers to The Daily Show with Trevor Noah's Election Night special. In particular, the lens aimed to reach coveted 'millennial' consumers where they are – on Snapchat. Our goal was to rejuvenate The Daily Show's ever-growing young audience as well as draw in new 18-24 viewers.

This fall, Comedy Central launched a robust multi-platform campaign to amplify awareness for The Daily Show with Trevor Noah and drive tune-in to its complete election coverage. The campaign leveraged broadcast, digital, out-of-home, and editorial tactics as well as a highly innovative social media strategy. Snapchat played an integral part within this campaign. In the spirit of election season, Comedy Central created a candidate-inspired Snapchat lens for The Daily Show. The Snapchat lens allowed users to "vote" for their preferred presidential candidate by smiling "if you're with her," or raising their eyebrows "to make America great again." The result? With a swoosh of the American flag, the Snapchat lens transformed the user into either a pantsuit-toting donkey or an elephant with an orange comb-over. 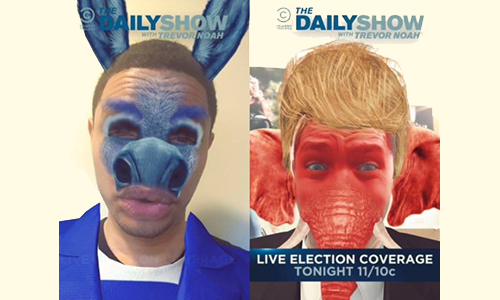