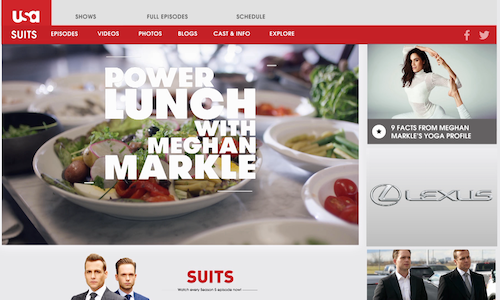 For Season 6.0 of USA Network’s hit drama Suits, Lexus returned as a sponsor, marking the 6th year of partnership between the brand and the series. Building upon the previous year’s #SuitsInspiration campaign, USA Network enlisted Meghan Markle—star of Suits and an inspired food and lifestyle tastemaker— and partnered with Vox media’s Eater to create compelling digital and editorial lifestyle content, presented by Lexus, in an interactive campaign that engaged fans across multiple touch points. The campaign was designed to strengthen Lexus’ connection with the consumer and reach “experiential masters” under Lexus’ culinary content pillar.

In partnership with Lexus and Eater, USA Network created a five-part video series hosted by Meghan Markle, star of the hit USA drama Suits and a lifestyle tastemaker who finds inspiration from food and the culinary arts. The video series is part of an overarching campaign, #SuitsInspiration, and is accompanied by interactive editorial content as well as user generated content tied to the theme of inspiration. The video series began its rollout in time with the Suits season 6.0 premiere and the entire campaign was promoted on-air, online and via social media using Suits’, Eater’s and Meghan’s handles.

When the characters of Suits, a television series set in the world of a high-profile New York City law firm, need to sign a new client, or close a big deal, they turn to a time-honored business tradition— the elegant, opulent and no-expense-spared "power lunch.” Meghan Markle, like her character on Suits, is a lover of fine food and beautiful restaurants who is constantly on the search for the perfect “power lunch” spot. In the video series, Power Lunch with Meghan Markle, Meghan visits—by way of an All-New 2016 Lexus RX—five famous New York “power lunch” spots, commenting on the style, food, ambiance and reputation of each one. Meghan goes into the kitchen and prepares the restaurants’ signature lunch dishes with the chefs, after which they dine and discuss their culinary inspirations. The premise of this sponsored video series organically ties back to Suits, the personal interests of the host and tastefully integrates its sponsors, resulting in highly entertaining and delectable digital content.

To add to the engagement, viewers from usanetwork.com can access a comprehensive mapstack, powered by Eater, which lists and maps the five restaurants visited by Meghan with additional suggestions from the Eater editorial staff. This map serves as an actionable resource for the audience, matching the look and feel of the popular Eater 38 and Eater Heatmap restaurant discovery series.

Additionally, just as food inspires Meghan, viewers of the video series were encouraged to upload photos of what inspires them to Instagram using #SuitsInspiration for a chance to have their photos featured on-air during an episode of Suits. Fans posted everything from portraits of their own beautiful dishes, to photos of exotic travel locations, to homemade Suits-themed desserts.

Power Lunch with Meghan Markle, coupled with its actionable resources and activations, provides fans with compelling food and lifestyle editorial content in a truly organic and engaging integration. The video series feels authentic, inspiring, tastefully executed and most of all, entertaining.

Power Lunch with Meghan Markle generated impressive engagement on both usanetwork.com and Eater.com. For usanetwork.com, two of the videos in the series ranked among the top 10 most viewed short-form clips on the site and for Eater.com, two of the videos ranked as the top two custom videos. According to Nielsen TV Brand Effect, Lexus integrations in Suits, including Power Lunch with Meghan Markle, generate higher brand memorability and positive shift in brand opinion as compared to the auto integration in cable norm.

Video for Suits and Eater: Power Lunch With Meghan Markle presented by Lexus 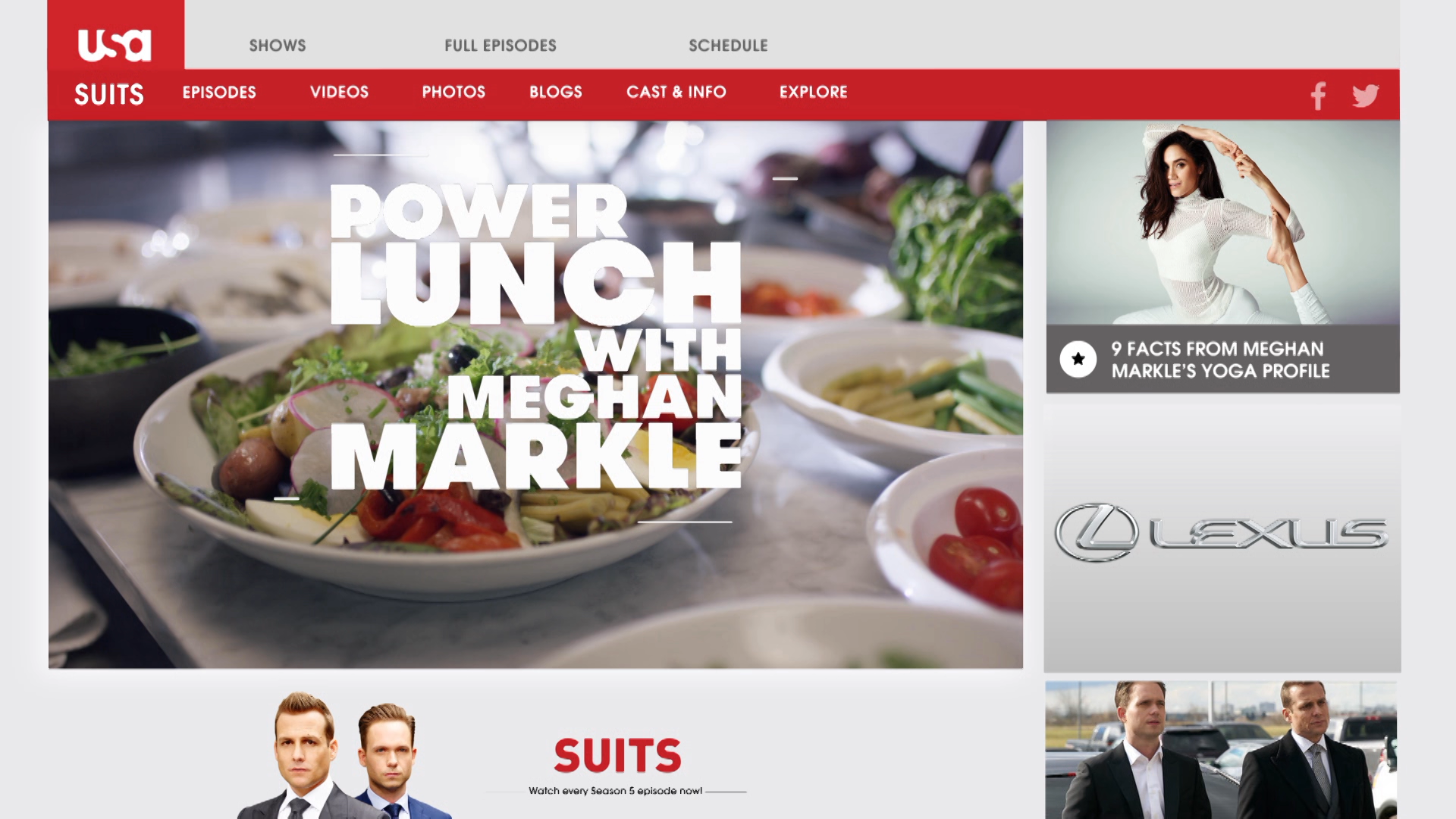