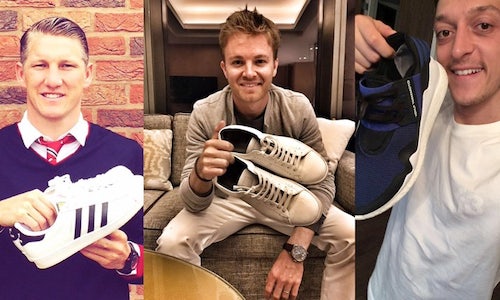 The #SneakersforGood campaign was aimed to use the global communication platform 'Laureus World Sports Awards' and its medial impact to communicate the social aspect of the Laureus movement and to promote its underlying mission – Sport for Good.

Laureus in general is mainly associated with its flagship event Laureus World Sports Awards and less with the 'heart' of the movement, the Laureus Sport for Good Foundation and its mission to use sports as a tool for social change. This is primarily due to the fact that from a media perspective the social aspect of Laureus is overwhelmed by the glamour of the Awards, its VIPs and the awards presentation itself. Since the beginning of the Awards history in 2000, the Sport for Good topic was thus barely mentioned by journalists reporting more about the flashing results from the Laureus World Sports Awards an its side events.

In order to increase the impact of Laureus it was intended in 2016 to create a CSR campaign that communicates Sport for Good and the power of sports as integral part of the Awards.

How do you manage to integrate the message 'Sport for Good' strategically into a glamorous Awards ceremony? How do you turn the media power around tons of celebrities and athletes at one specific event into something relevant and useful to promote your good cause?

And having more than 700 accredited media on location, how do you convince those to report about Sport for Good instead of all the lifestyle topics being 'hot' on a red carpet? And what role could guests and further influencer play?
Thus, a campaign had to be developed being strong enough to ensure a massive awareness and still easy enough for EVERYONE to participate and act as a spokesperson for the core message: SPORT FOR GOOD.

The basic idea was to establish a never-seen-before red carpet dress code to represent Sport for Good. Each Laureus Ambassador and all guests had a relevant and authentic link to talk about the charitable background live and via their own social channels. Beforehand and on location. Easy, but with an enormous impact. Through own communication channels or via media interviews. The highlight: the establishment of a new red carpet dress code – a vivid symbol for Sport for Good. A dress code, which will communicate the good cause and the belief in the power of sports for now and the upcoming years!

The implementation and distribution of the campaign was realized via a strategically structured and targeted multiplier approach and divided into phases:

1. Strong social media activation prior to the Awards with focus on twitter:

As an authentic 'kick-off', Formula One World Champion Nico Rosberg officially inaugurated #SneakersforGood and asked his community as well as further multipliers via call to action to follow the movement. Subsequently, further selected influencers were activated within a controlled and targeted snowball system resulting in more than 75 multipliers, such as Mesut Özil, Boris Becker, Martin Kaymer, Sebastian Schweinsteiger, Matthias Schweighöfer, Carles Puyol, Luís Figo, Bob Burnquist and their fans joining the movement up to the awards.

Within the digital activation campaign everyone – the general public as well as the international sporting scene – was encouraged, by posting a #SneakersforGood photo, to show their core belief in the power of sports, thus to raise awareness for Laureus and activate their community to do the same.

Highlight of the campaign was the red carpet activation at the Laureus World Sports Awards in Berlin, aimed at making Sport for Good the 'talk of town' and thus a relevant subject for media reporting. All guests, celebrities and sports influencers participated in the idea and wore sneakers to their tuxedo and evening dresses creating a completely new dress code on the red carpet. Besides the reporting media, all guests were asked to take photos of their styles and post them with a link to the campaign on their social media channels.

Through the digital implementation of #SneakersforGood and its red carpet activation, the Laureus World Sports Awards have for the first time in the event's history been communicatively linked with Sport for Good – establishing the social aspect of Laureus as a relevant part of the entire media outcome.

The simple mechanism enabled everyone to easily participate. Already in the run-up to the awards more than 75 world-known sportspeople and celebrities joined #SneakersforGood raising awareness within a wide social media community. The inspiring posts created communicative input for media pre-communication and besides motivated further multipliers and especially the guests to join in, resulting in 75% wearing sneakers with their black tie.

Regarding the social media outcome, the main channel Twitter recorded 47 million impressions in total, supported by #SneakersforGood as trending topic for two days. With a maximum interaction rate of 15.48% and an average interaction level of 6.4% the benchmark of 1-2% could be succeeded by far. Also on Facebook and Instagram corresponding results were achieved with potential reaches of 51 million and 19 million people. Furthermore, the Laureus-own channels recorded a remarkable increase in followers with +20% on Twitter and nearly +100% on Facebook.

The new omnipresent dress code created a strong story angle for media to refer to Sport for Good in relation to the Awards generating high media awareness for the subject.

In total, #SneakersforGood was the most successful 'Sport for Good' communication campaign in the history of Laureus. 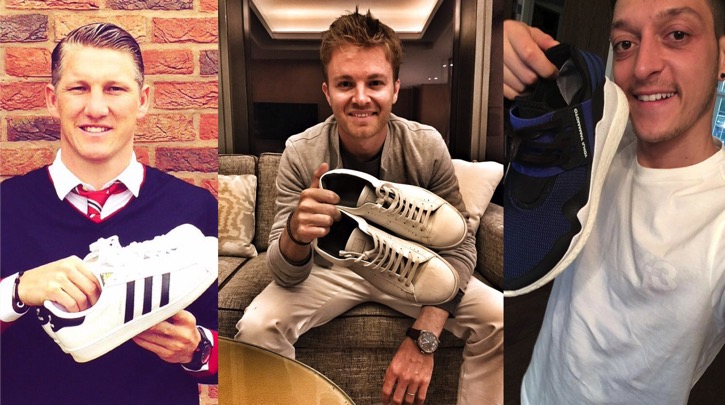 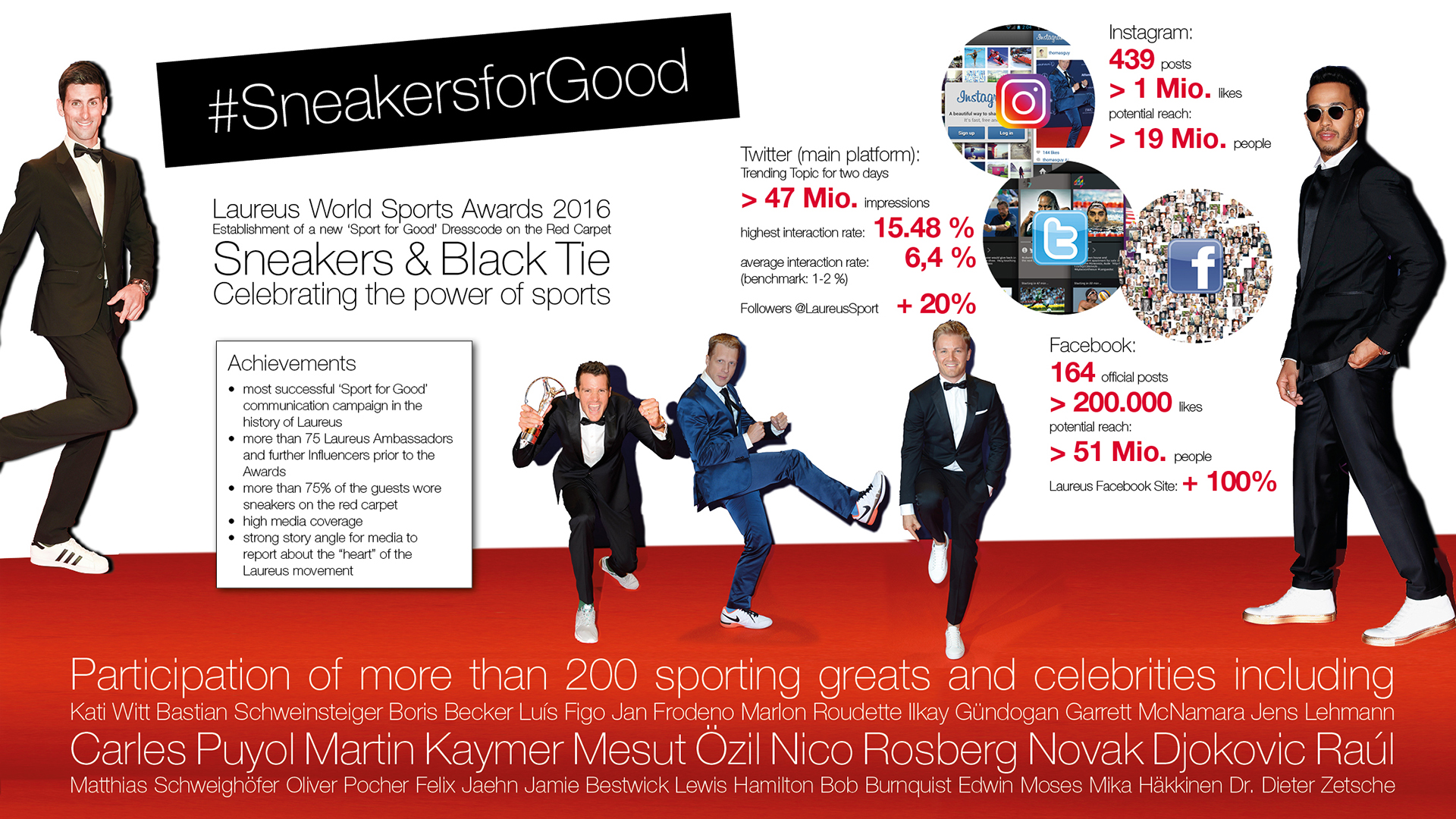 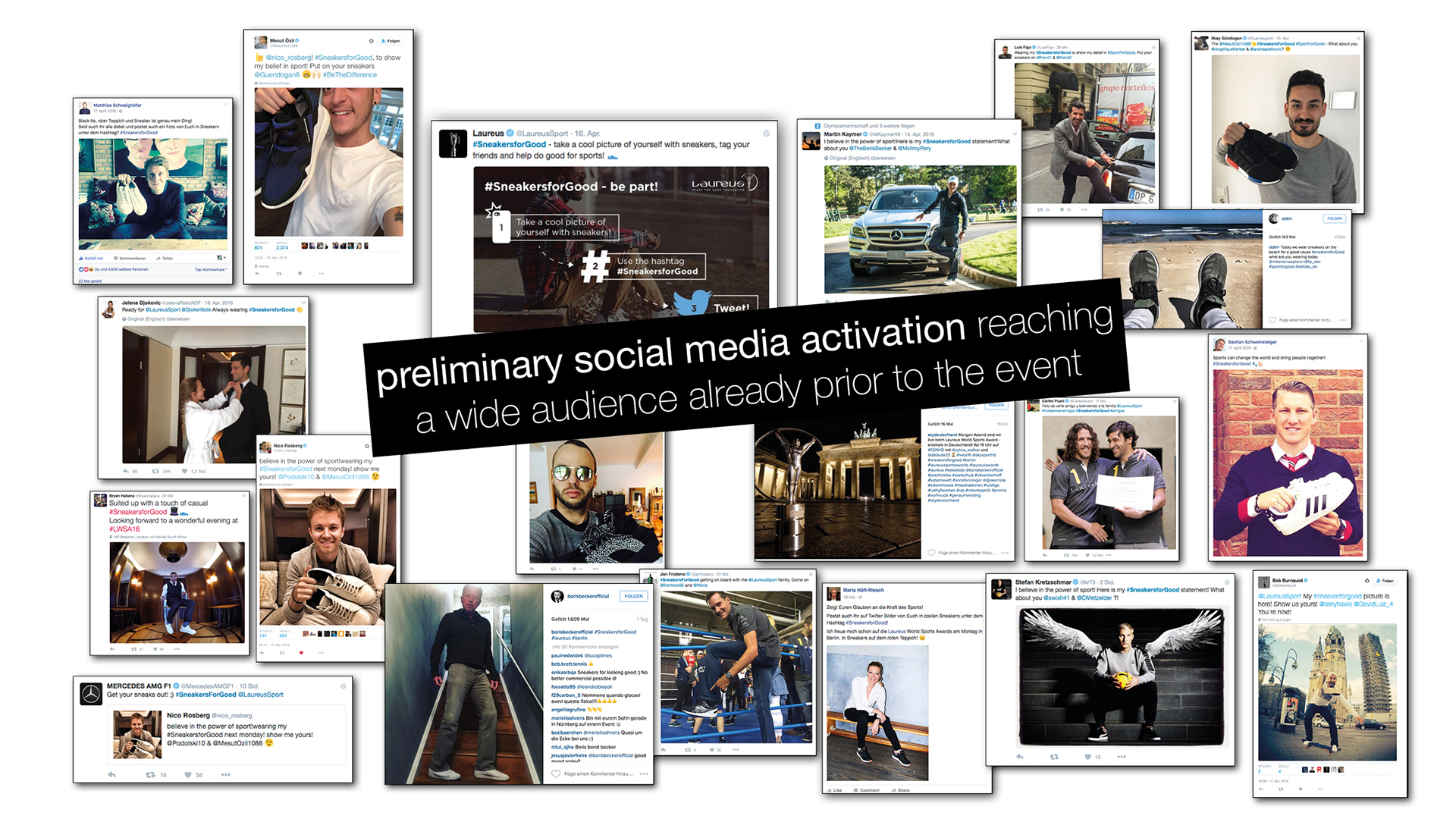 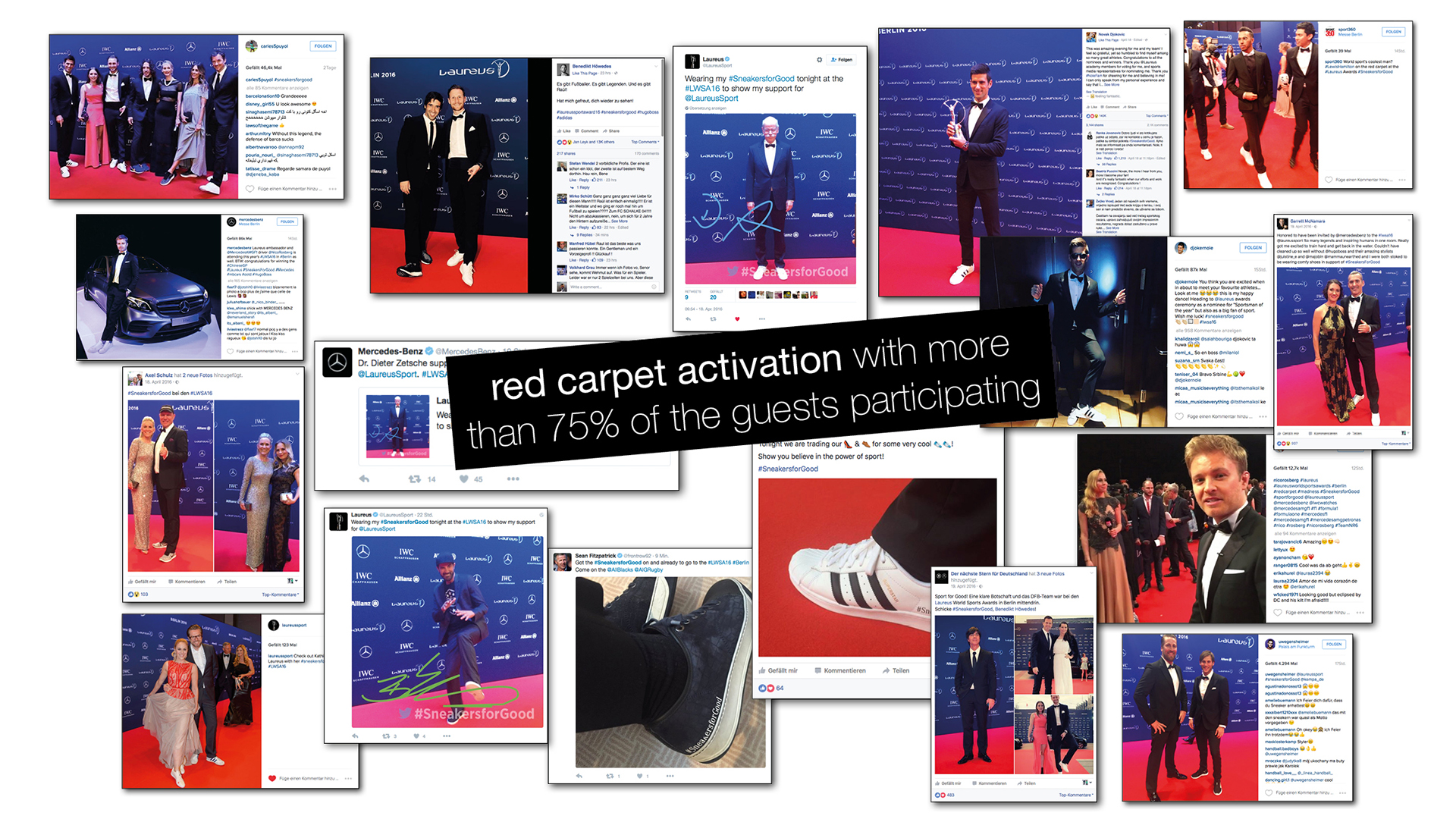 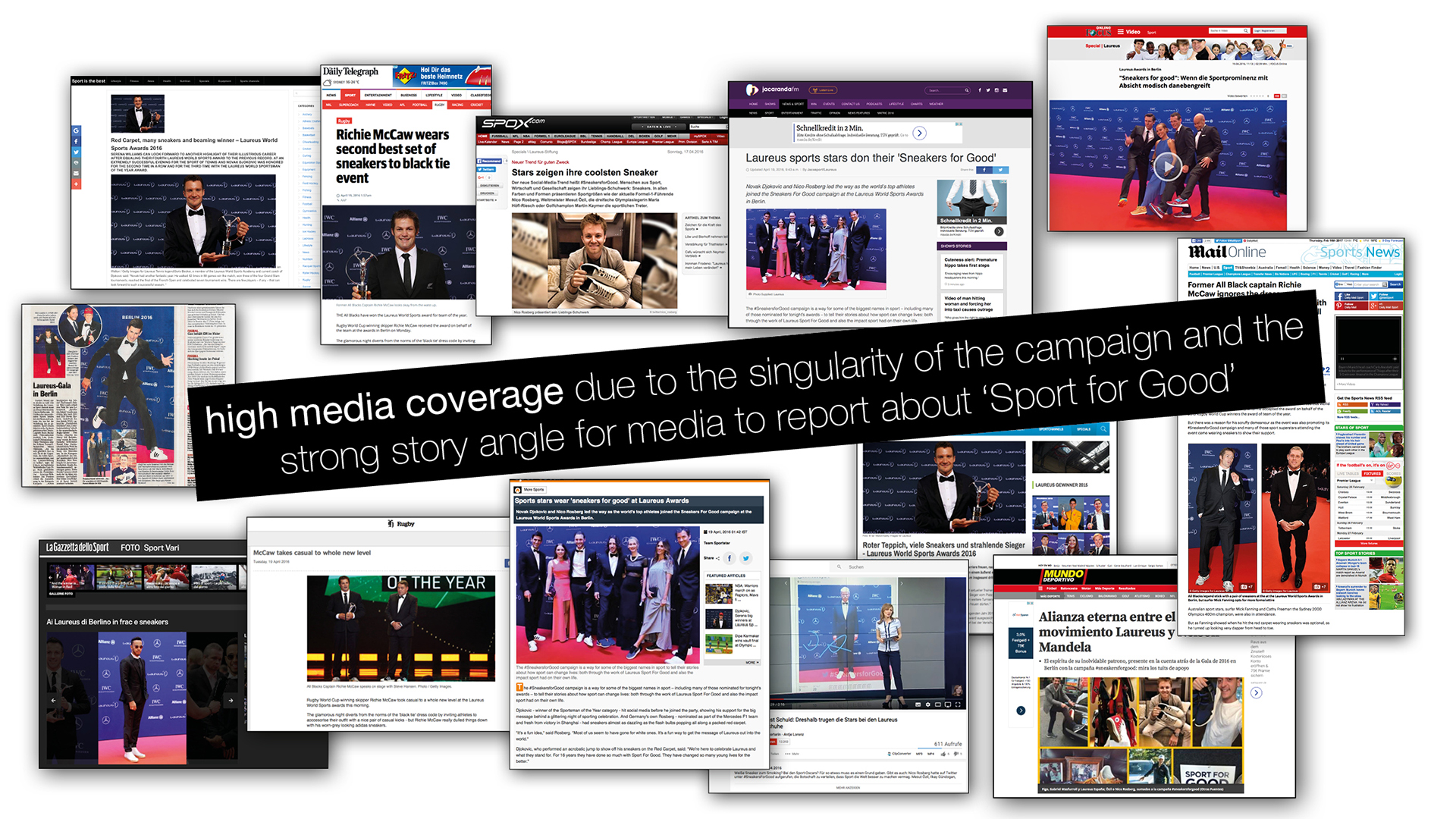