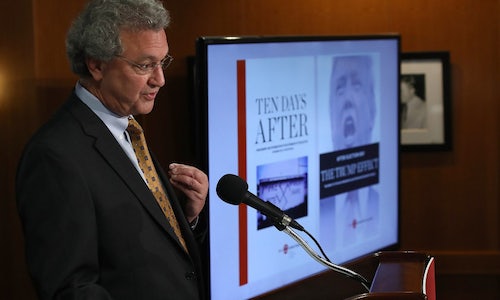 Founded in 1971, the Southern Poverty Law Center is a civil rights organization dedicated to fighting hate and bigotry and seeking justice for the most vulnerable members of our society. Our mission: fight hate, teach tolerance, and seek justice.

On November 9, the day after the presidential election, we received numerous reports of bias-related incidents. Everyday Americans were targeted at school, at work, on the street and in their homes. LGBT people, immigrants, women, African-Americans, Jews, Muslims — all reported harassment that they said surpassed anything they'd ever experienced. In many instances, their attackers explicitly named the newly elected president as giving them "permission" for such hate and bigotry.

In the midst of this fast-evolving situation, we thought it was imperative to first capture and then report what was happening in communities around the country. If hate was given license by the results of the election and communities were under attack, we wanted to know, and we wanted the world to know. Following the election of President Donald Trump we launched the #ReportHate campaign, which by the end of 2016 had reached millions on social media and beyond.

For many Americans, the result of the election was a surprise. Unfortunately, for too many Americans, so was the harassment the election seemed to have given a fresh license to. As one Asian-American woman told us, "I have experienced discrimination in my life, but never in such a public and unashamed manner."

Our strategy was therefore quite simple. We recognized a fast-moving situation — an eruption of reports across the social web — and created a tool to measure it.

We acted immediately, and by mid-day on November 9 launched a simple form to collect reports and directed people to it on Facebook and Twitter with #ReportHate. We were careful to be very clear in our communications that reporting to us was no substitute for contacting law enforcement or other authorities.

The response was immediate. Hundreds of reports came in the few days following the election. Not long after we announced the campaign on social, calls started coming in to our office as well. Staff worked overtime to take down every report that was submitted.

A team was assembled to respond to reports and 1. confirm that authorities were also notified and 2. capture more details about the incident including collecting images of vandalism. On Friday November 11, we posted the first of a series blog posts based on our findings. That first count? 201 in two-and-a-half days. As part of our strategy of raising awareness around these reports, we worked closely with national and local reporters to track down stories of harassment around the country. We also used social media to distribute guides on how our supporters and the public at large could fight back against hate in their communities.

As it quickly became apparent, and as the media helped confirm, the election had unleashed a torrent of ugly incidents that spanned diverse communities and politics. From our very first post, we also collected and reported on a number of anti-Trump incidents, though this number remained lower than the majority of other incident types.

By Thanksgiving it was clear that we had an opportunity to bring even more attention to this issue. We reviewed the incidents reported in the ten days following the election and published our findings at a press conference in Washington DC. Joining us were advocates from many of the communities that were targeted. Together in solidarity, and with our report, we appealed to our new president to recognize what his election had unleashed.

"Since Election Day, the Southern Poverty Law Center has reported hundreds of incidents of harassment and intimidation. I say to Donald Trump: take responsibility."

That was former Democratic Minority Leader Harry Reid speaking on the floor of the United States Senate on November 15. Senator Reid also read #ReportHate's then-300 incidents into the Congressional Record.

In New York, Governor Andrew Cuomo ordered the NYPD to create a special unit to investigate the incidents our initial #ReportHate results showed in the state. Philadelphia, Los Angeles, and Nashville followed suit. Massachusetts' attorney general created a hotline for people to report incidents and Seattle's mayor signed an executive order reaffirming the city's commitment to immigrants, the top target of harassment according to our findings. We also worked with a number of other major municipalities, including law enforcement agencies, to share our data and assist the setup of other methods of data collection.

We also worked closely with many media outlets across the country to share our data and stories and to provide context for what we were seeing. In January 2017, we joined #ReportHate to a long-term collaborative project led by the investigative nonprofit ProPublica. Together with a number of other civil rights organizations, newspapers, and software companies, we are committed to continuing the work of #ReportHate. Our goal remains to ensure that victims have a voice and that allies and authorities are equipped to help fight hate in all its forms. 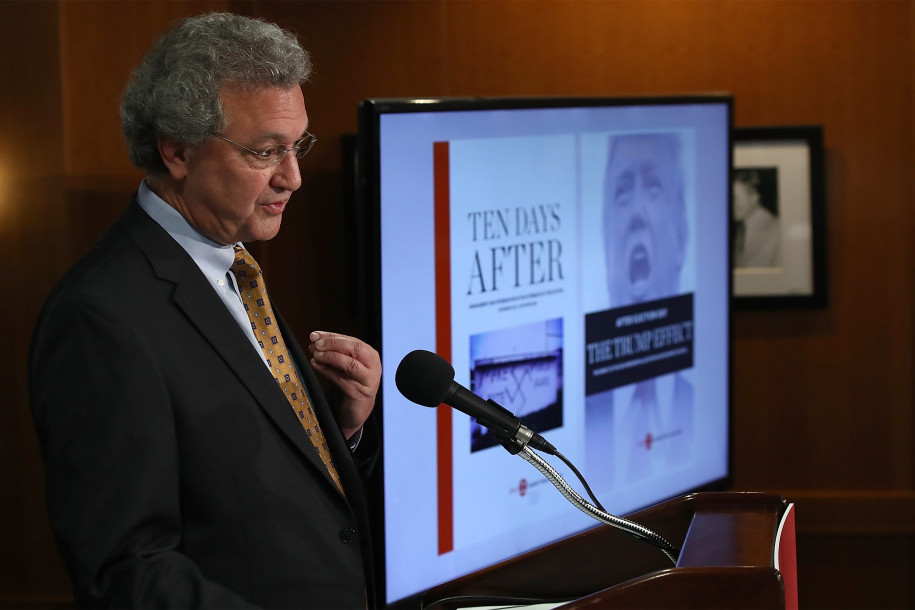 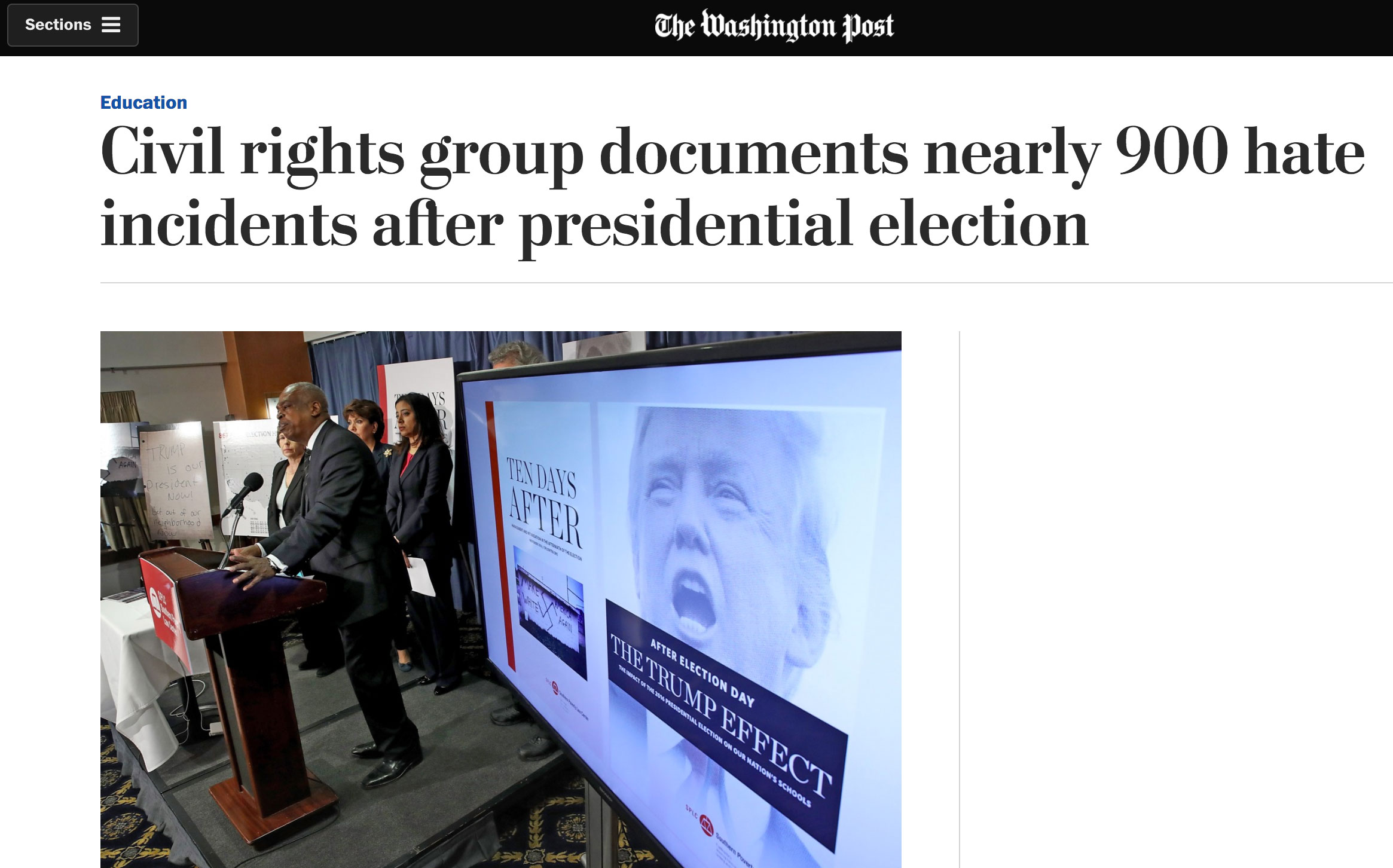 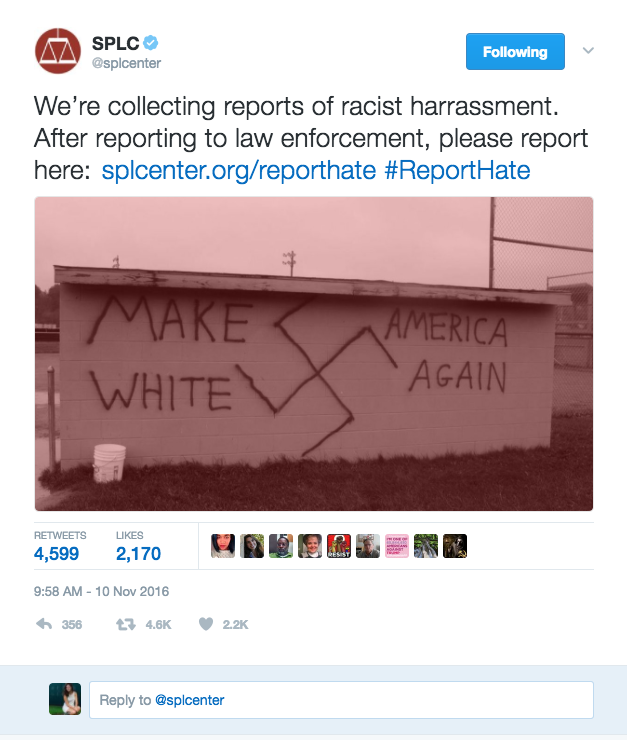 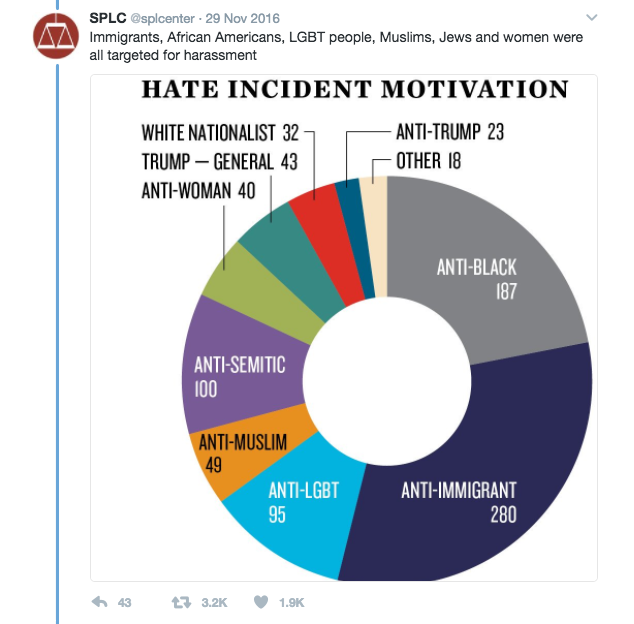 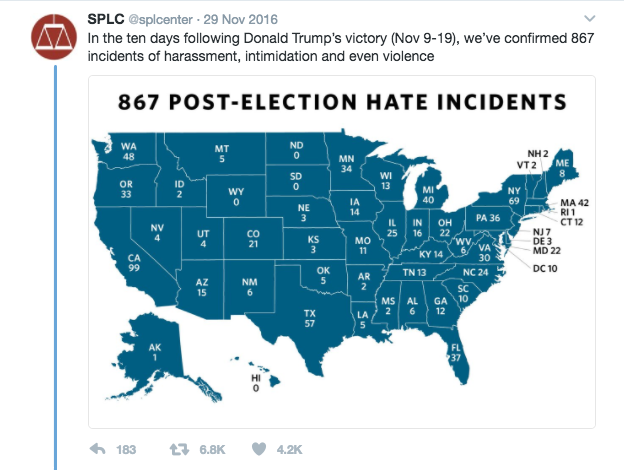 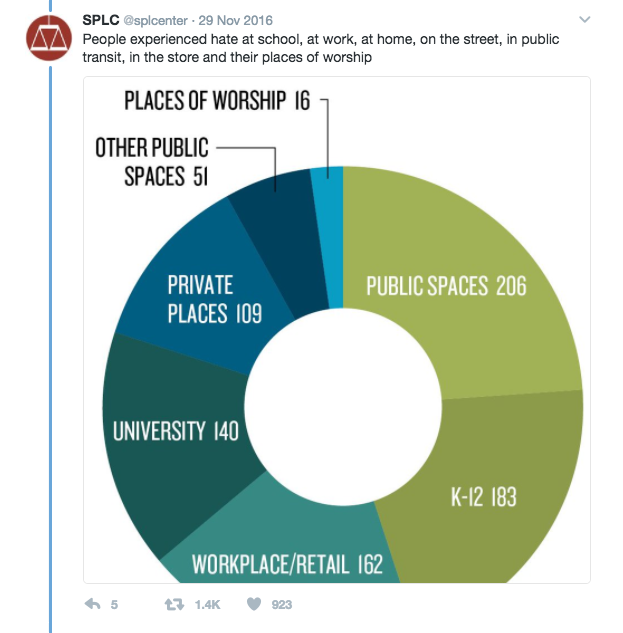 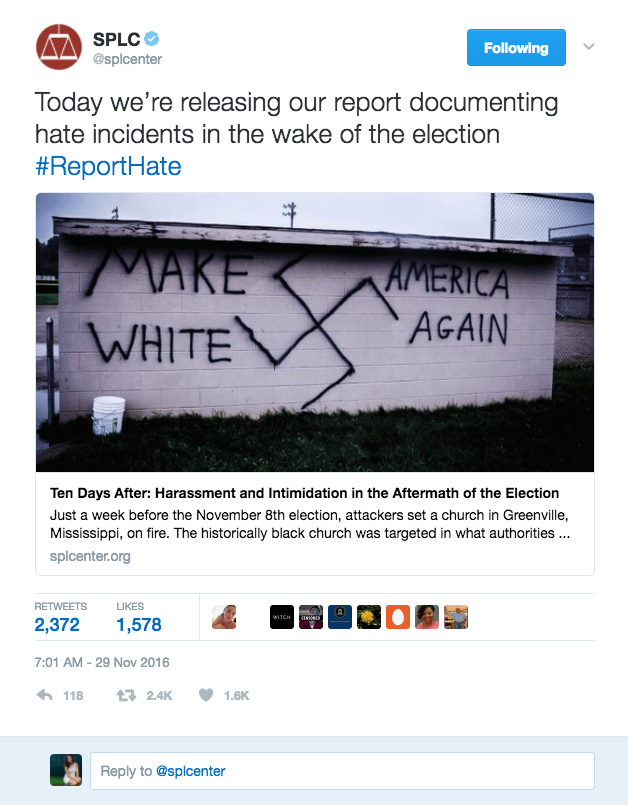