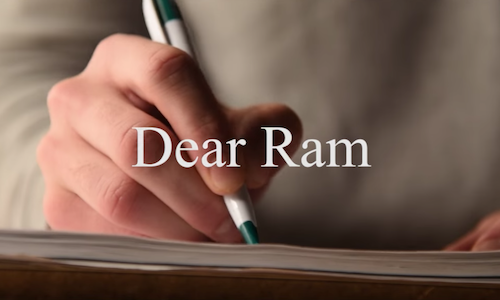 Graduation. It's where current students are headed, where past students have been, and where prospective students hope to be. Graduation is what college is all about. Each May, Colorado State University says goodbye to almost 5,000 students as they shake hands, accept their diplomas, and walk across the stage. It's a big deal. Like, a really big deal.

Commencement is the pinnacle of the student journey. It's one of life's most memorable moments. It's a time when emotions run rampant, and we have an opportunity to connect with each of our primary target audiences in unique, meaningful ways.

As digital storytellers for Colorado State University, we developed a plan to deliver a comprehensive, weeklong campaign that touched each segment of our audience in a meaningful way.

From final exams to the final commencement ceremony, we invited our entire social audience – students, graduates, alumni, parents, and friends – to join us for the experience.

We created content that drove people to share by focusing on evoking high arousal emotions. Whether it be parents, students, or alums, we paved the way for our fans to embrace each piece of content.

A month prior to graduation, we introduced #RamGrad to our audience and pushed messaging across our social channels to promote deadlines and important information. We developed a visual theme for the campaign that was used across social and was displayed live on the jumbo screen at every ceremony, encouraging people to share their graduation experience using #RamGrad.

The crown of our campaign was a video entitled "Dear Ram" featuring seven students who faced challenging journeys to graduation. We asked their parents to secretly write a letter to their #RamGrad and the students read their letter for the first time on camera. Emotions got real. We made people cry. The video was posted across CSU's social media channels, and was featured on Buzzfeed and Upworthy.


At the beginning of finals week, we created a video of CSU mascot CAM the Ram offering Hugs and High Fives to unsuspecting students studying in the library to give our stressed Rams something to smile about. We also created coloring pages for study breaks and shared motivating quotes paired with beautiful campus shots. We took the funniest student-generated comments from YikYak about finals week and transformed it into a BuzzFeed article called, "26 Things Overheard At Colorado State During Finals Week."

Graduating seniors took over CSU's official Snapchat and student-run Instagram accounts leading up to graduation. We designed On-Demand Snapchat Geofilters within high-traffic graduation boundaries for the entirety of commencement, and placed signs around campus letting anyone in Ram Country know when they were entering a Geofilter zone.

We stocked our #RamGrad Pinterest board with pins about commencement, graduation parties and gifts for grads. CSU's Twitter account transformed into every #RamGrad's best friend. We shared hilarious GIFs, motivating quotes, and a lot of "we'll miss you, Rams." And of course we covered commencement throughout the weekend, sharing special moments, photo albums and final goodbye graphics.

When people ask you what you're doing with your life after graduation... #ColoradoState #RamGrad #ClassOf2016 pic.twitter.com/BTai3LwBbZ
— Colorado State Univ (@ColoradoStateU) May 13, 2016 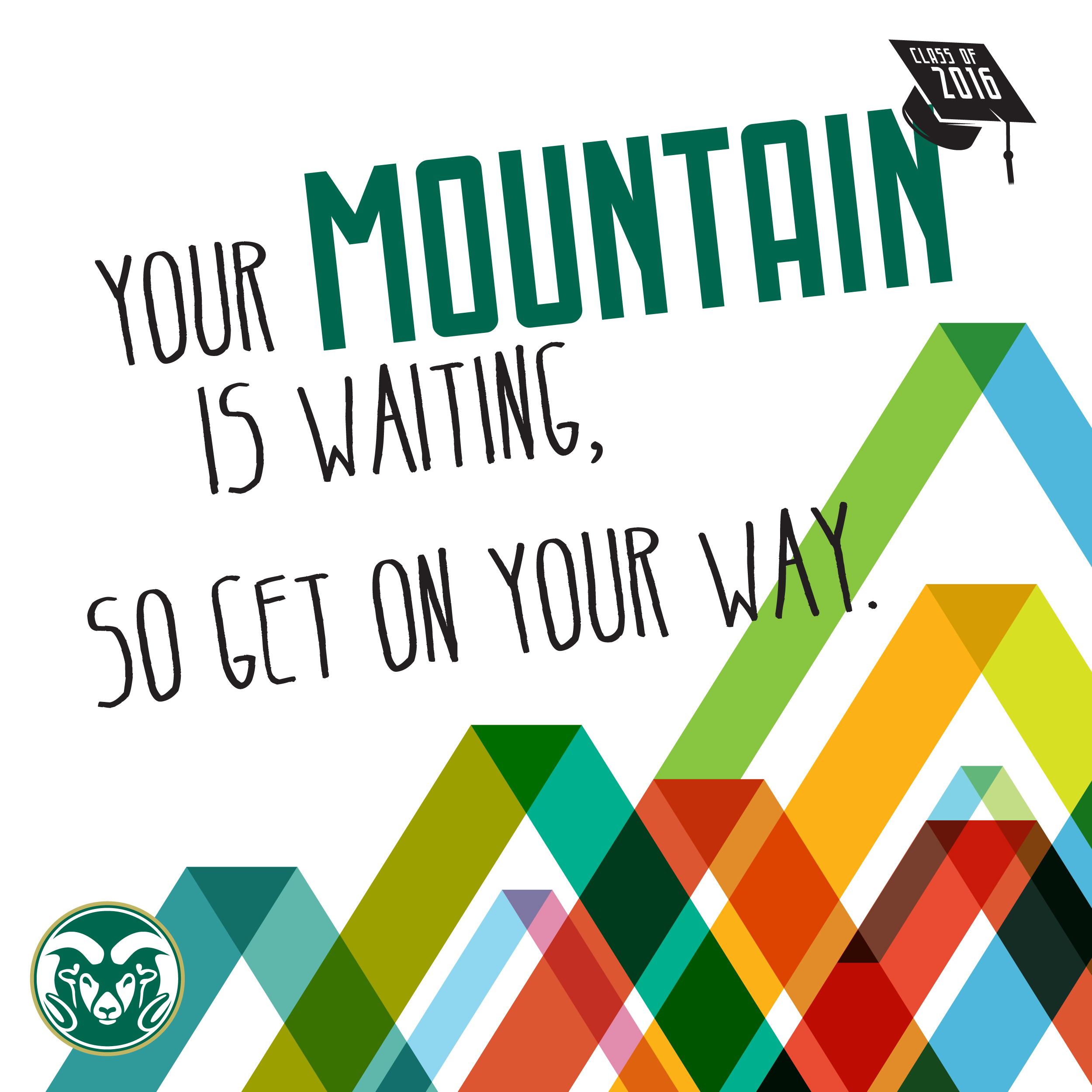 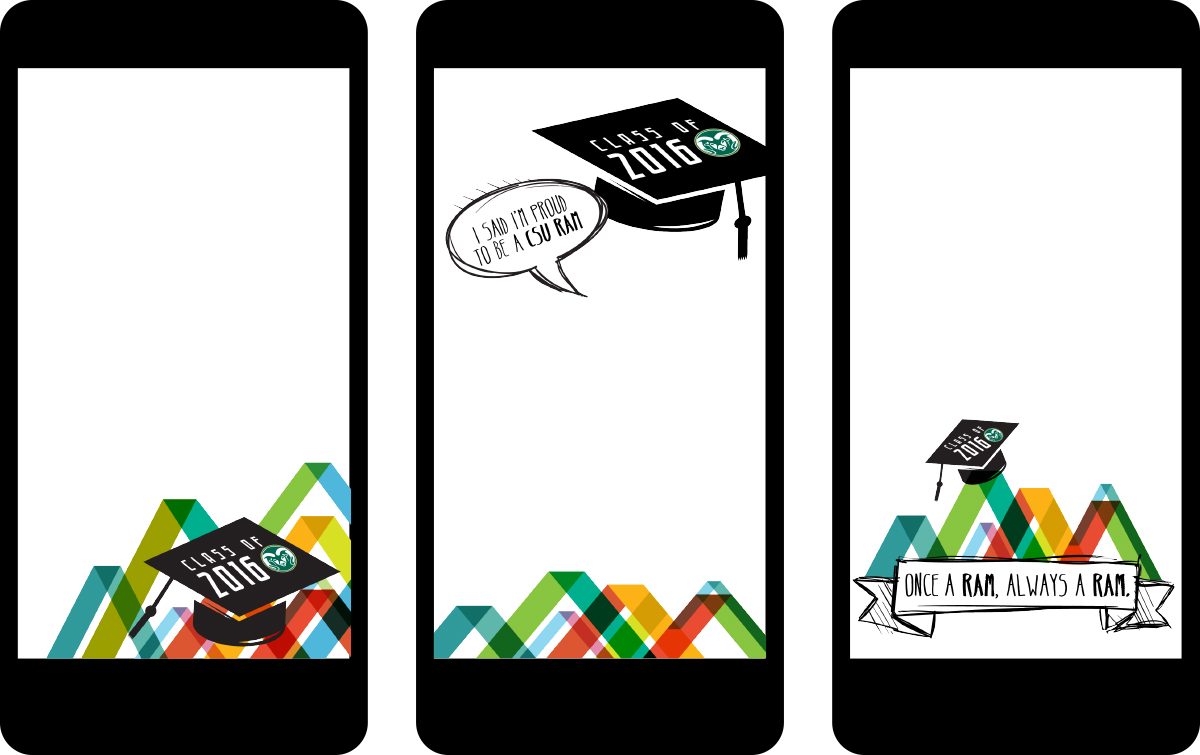 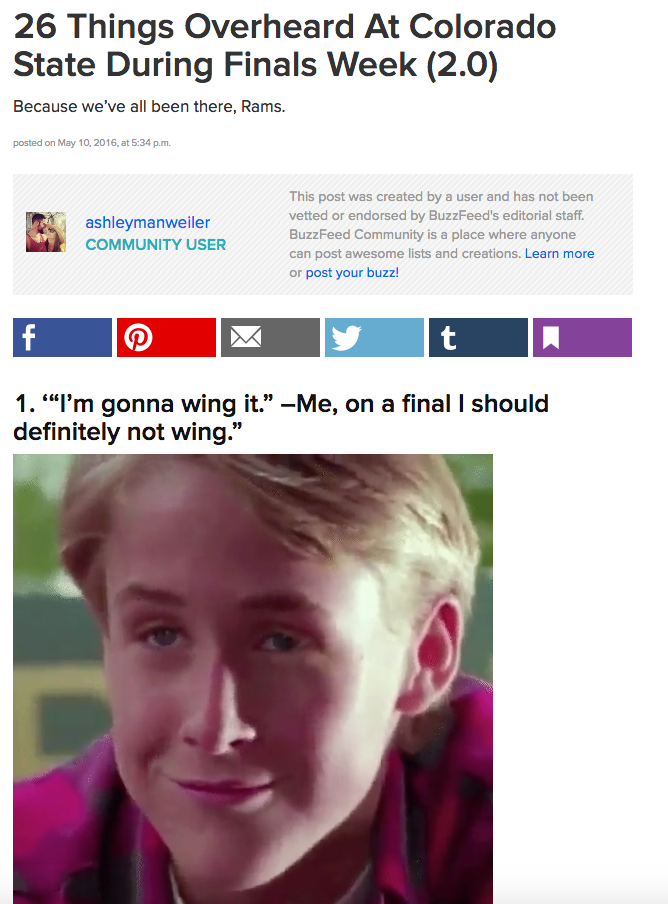 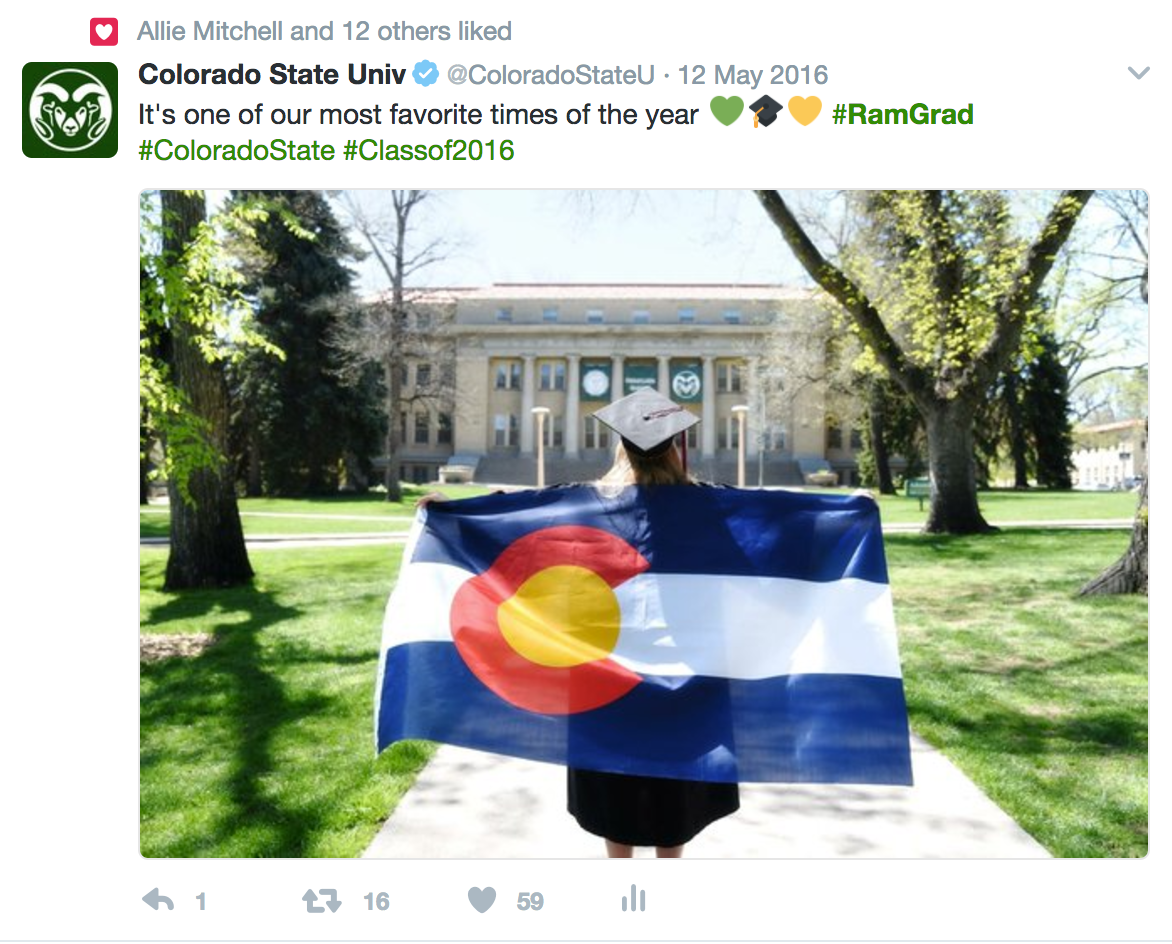 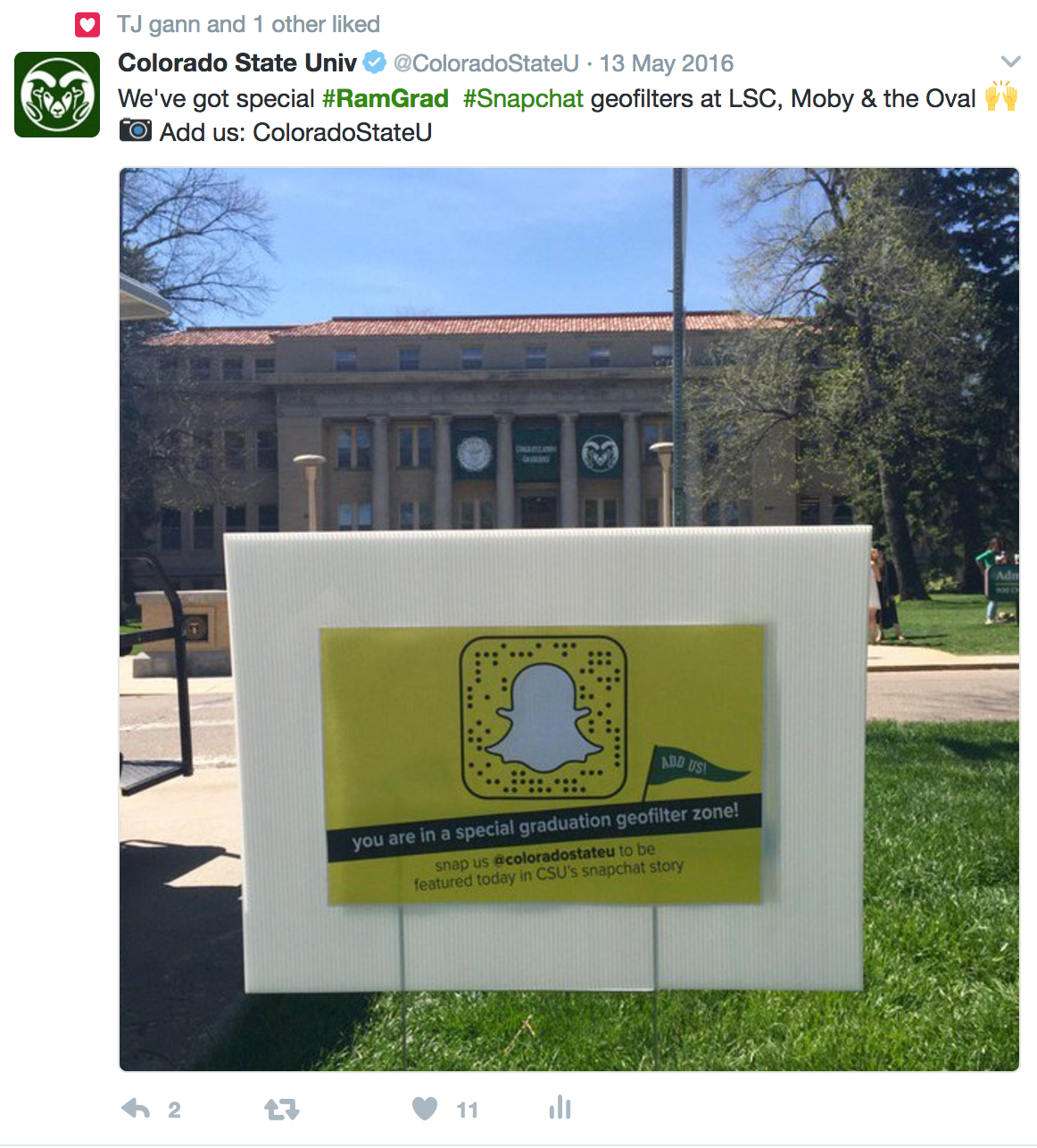 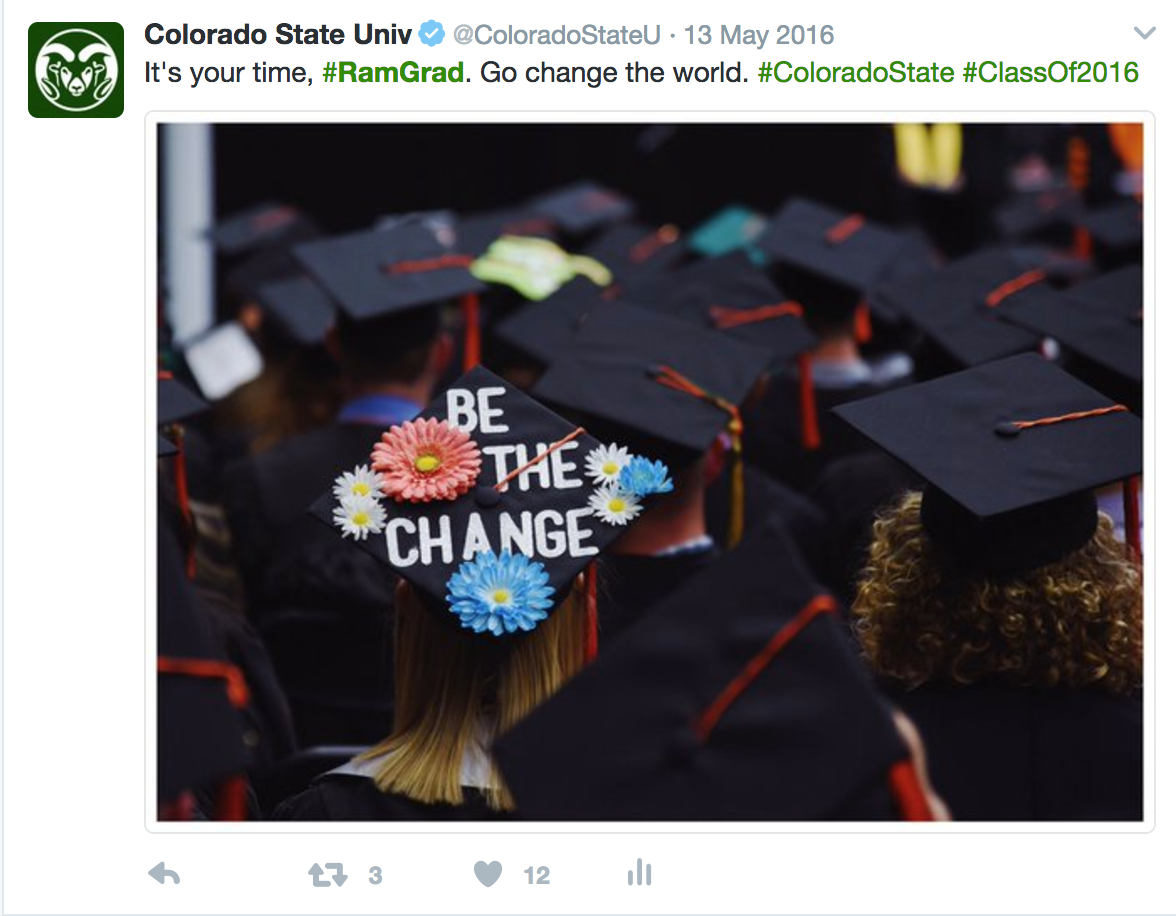 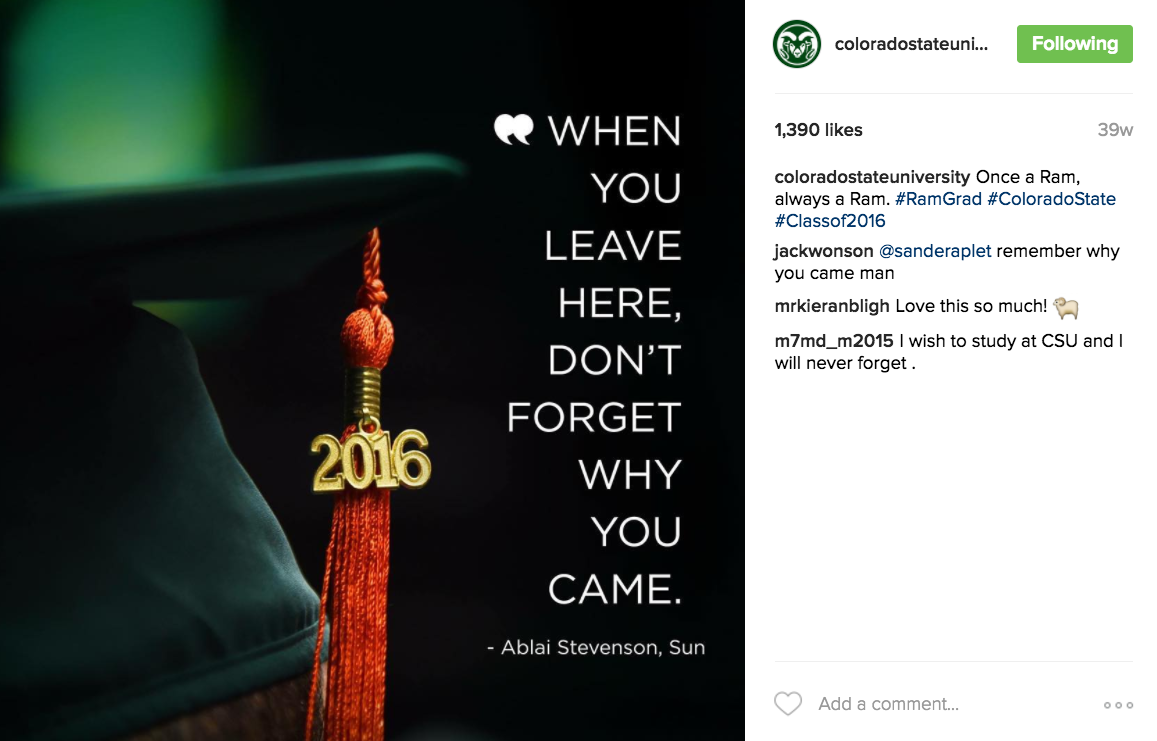