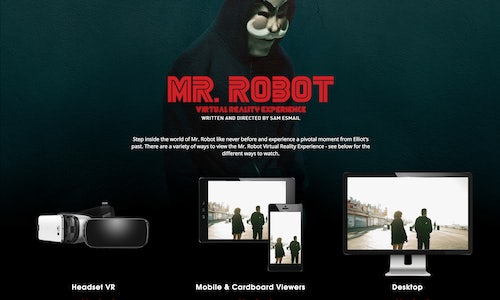 USA Network's Golden Globe ® winning series Mr. Robot has become a global phenomenon, earning an energized and vocal fan-base that is often taking to social media to share their passion for the show. To offer fans deeper engagement with the series and to extend the narrative beyond the linear broadcast, USA Network collaborated with Mr. Robot creator Sam Esmail and Emmy® nominated virtual reality studio Here Be Dragons to create a virtual reality film that would allow fans to experience Mr. Robot like never before. In order to reach a large consumer base, the Mr. Robot Virtual Reality Experience was promoted, shared and viewable across social media channels, in addition to digital and headset VR platforms.

The Mr. Robot Virtual Reality Experience is a 12-minute film starring Rami Malek in his Emmy® winning role as cyber security engineer turned vigilante hacker, Elliot Alderson, and takes viewers on a flashback journey with Elliot as he remembers his first date with love interest, Shayla. The decision to tell the story of this early encounter in virtual reality was deliberate; the narrative effectively leverages the medium's immersive storytelling capabilities to amplify the feelings of presence, intimacy and empathy in ways that television would never allow. Esmail's atmospheric writing and direction create a poignant, cinematic experience infused with inescapable melancholy as the characters visit locales such as the Coney Island Boardwalk and Wonder Wheel, which have become staples of the show. The film isn't simply a technical demo or a gimmick to drive fan engagement; it's a legitimate storytelling experience that authentically captures the tone and sensibilities of the series in an entirely new medium.

The Mr. Robot Virtual Reality Experience premiered at San Diego Comic-Con with a live simulcast viewing with the show's cast at Petco Park and via the Within app for those not in San Diego. Participating fans were instructed in advance to download the Mr. Robot Virtual Reality Experience from the Within app, which would be made playable once the simulcast officially kicked off. By using the Within technology, USA Network was able to control the timing of the video's release and make an event out of the premiere. The technology enabled over 20,000 fans across the globe –including over 1,100 in Petco Park—to take part in the largest VR simulcast ever.

Immediately after the simulcast, the film disappeared from the Within platform. But Comic-Con attendees still had more chances to watch. Day after day, fans lined up outside a storefront in downtown San Diego that USA Network had transformed into an authenticate replication of the Mr. Robot Computer Repair Shop, featured in the series, as well as Elliot's apartment—the location where the VR film begins and ends. The activation served as the venue where fans could experience, and truly get immersed in, the narrative.

But it didn't stop there. To let fans to watch the film where and when they wanted, a partnership with Uber enabled fans to request a ride in a fleet of Mr. Robot "repair vans," which carried VR headsets playing the film. The experience was brought to consumers in the Downtown San Diego area, making Mr. Robot the first VR experience available "on demand," and making Uber an unexpected VR distribution platform.

The Comic-Con premiere and activations deliberately offered many "sharable" moments—from the spectacle of the world's largest simulcast with the show's cast, to the wow-factor of the Mr. Robot Computer Repair Shop pop-up, to the surprise-and-delight of the Uber partnership—that encouraged fans to share their experiences on social media. The fans' social sentiment and engagement helped drive awareness, generate buzz and build momentum for the VR film's eventual wide release on other social and digital platforms.

The critical and fan response to the Mr. Robot Virtual Reality Experience has been incredible. Over 20,000 fans tuned in for the simulcast premiere, making it is the largest virtual reality simulcast ever. The press around VR premiere at Comic-Con generated over 450MM media impressions and the coverage was overwhelmingly positive, calling out the fact that it offered real storytelling in the virtual reality medium. Additionally, the positive fan sentiment shared on social media drove awareness and overall amplification for the film.

In the two weeks after launching on Facebook 360, YouTube 360 and the Within platforms, the film earned over 550K views and the numbers continue to grow. After six months, the Mr. Robot Virtual Reality Experience has been viewed nearly 1.4M across all platforms. 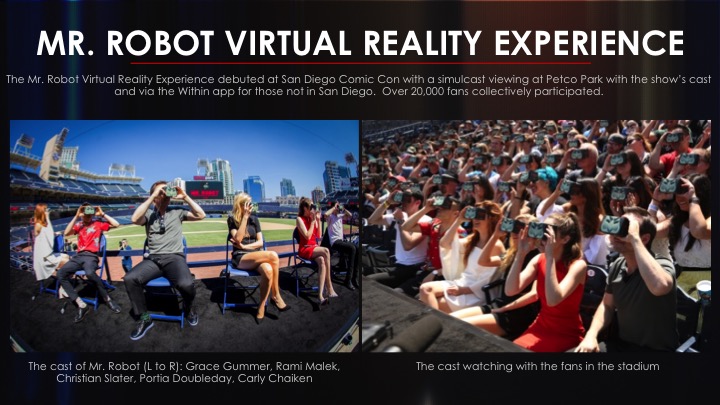 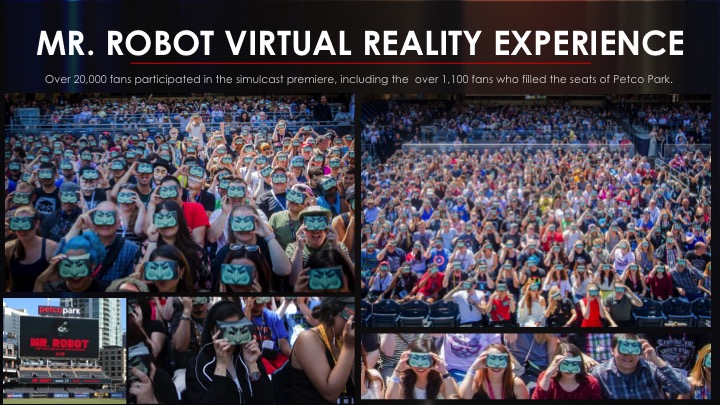 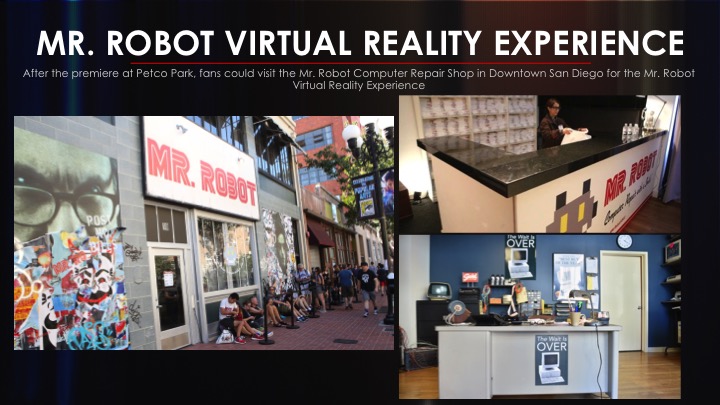 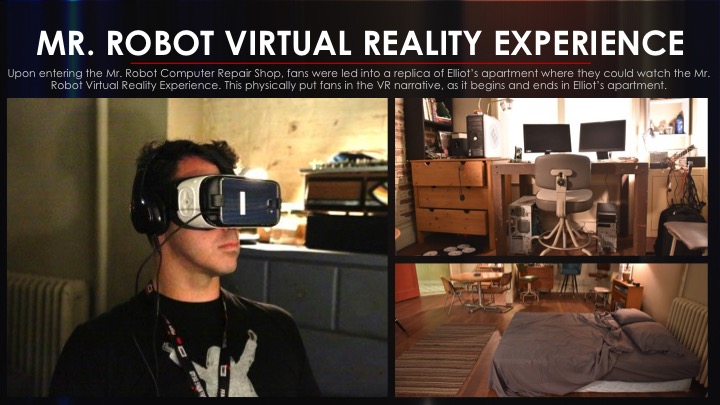 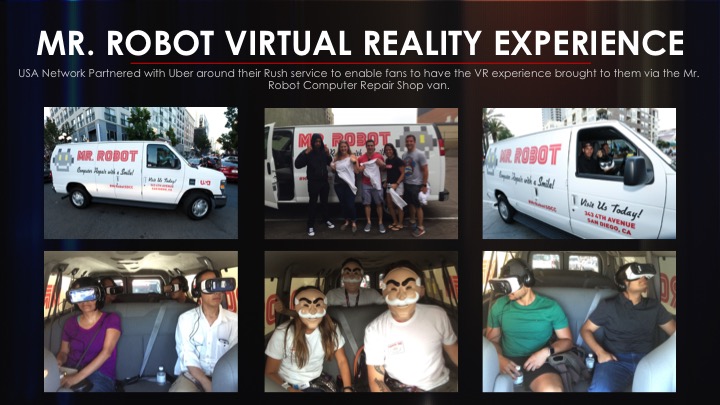 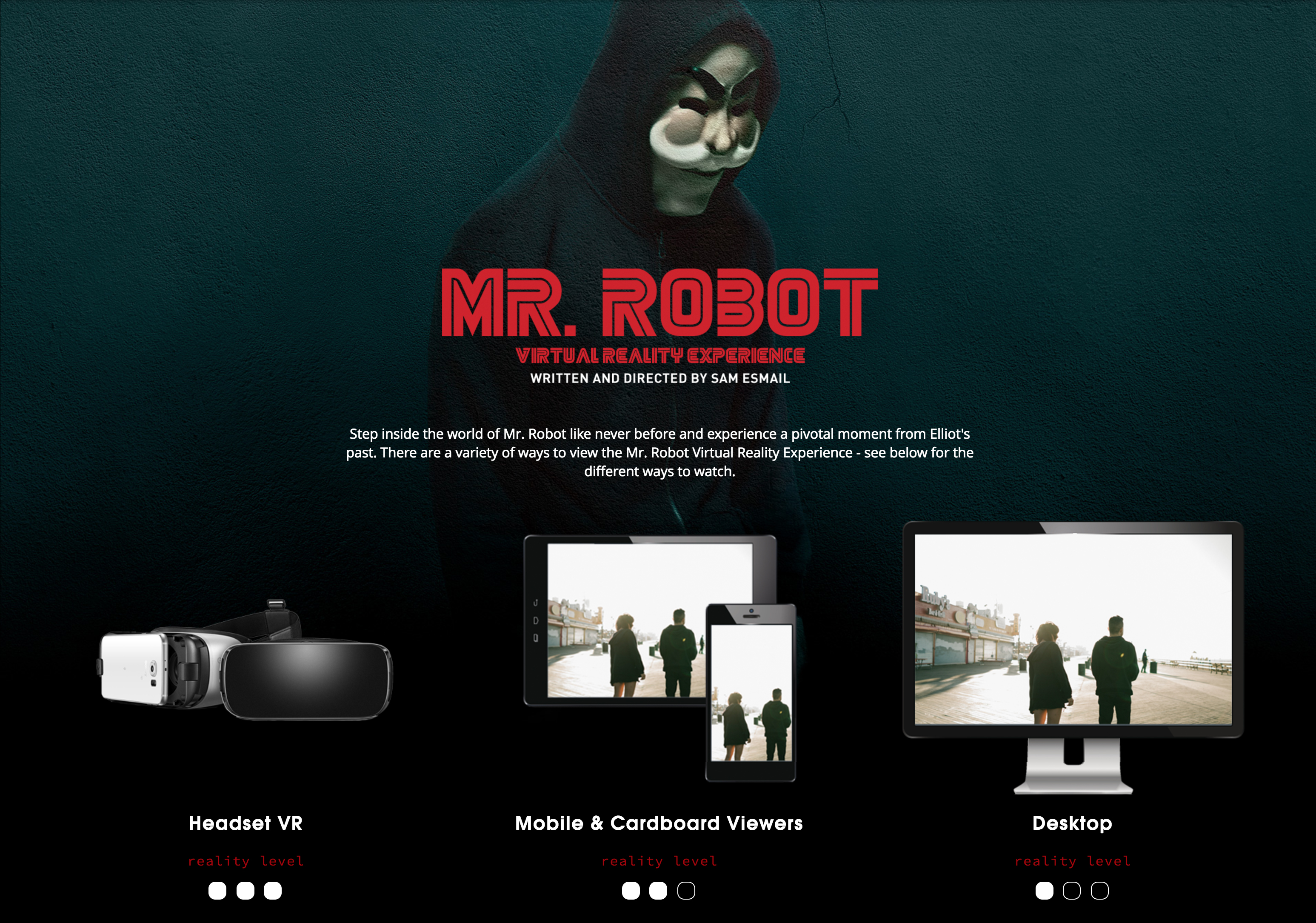