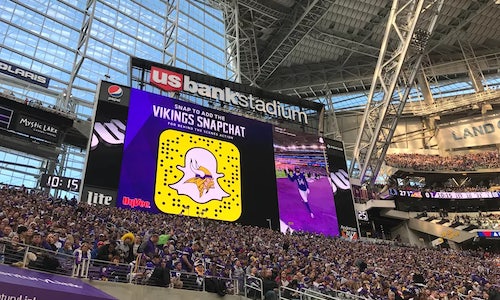 Stadium display boards are constantly evolving to be more than just a highlight machine or call for crowd noise. However, these massive screens now compete for attention with the smartphones fans turn to during any given game break, making it more important than ever to provide fans with innovative and interactive content to attract and keep attention on the field. The NFL's Minnesota Vikings saw an opportunity to connect the smartphone and in-stadium screens, forging a greater bond with their fan base, by using the most popular mobile camera company in the world—Snapchat.

Through a partnership with Tagboard and Snapchat, the Minnesota Vikings became the first NFL team to curate and display their Snapchat Official Story on the stadium video boards. The Viking's Story included behind the scenes locker room footage, enticing pregame content, and up close encounters with key players from the team. By taking this unique content that is typically reserved for Snapchatters to view in the app and mirroring it on a massive scale for the whole stadium to enjoy, we were able to increase engagement, create a fun new experience for the crowd and grow awareness for the Viking's Official Story Snapchat account all at once.

To elevate the interaction, we displayed the Viking's unique "Snapcode" on the video boards alongside the Story content which allowed Snapchatters to "Snap to Add" them as a friend right in the moment. Snapcodes are Snapchat's version of a QR code and are activated via the Snapchat camera. By adding the Vikings on Snapchat, fans have highly coveted visibility into the Vikings never before seen content, opening a new channel for the team to engage with their fans. The Minnesota Vikings, Tagboard, and Snapchat worked together to bring an "NFL First" to life, for the fans, and to push forward on the boundaries of innovation.

The Minnesota Vikings became the first NFL team to display their team's Snapchat Story in-stadium. By breaking new ground in the sports industry, the Vikings were named one of the most tech-savvy teams in all professional sports worldwide in Sports Illustrated. The Vikings saw the earned media as an amazing feat, especially given their ranking among teams located in "more famously tech-savvy areas." The Vikings also saw a 5% increase in Snapchat followers on the day of the activation. This kind of growth is comparable to what some sports team experience in a month's time.

Still, according to Scott Kegley, the Vikings' Executive Director of Digital & Innovation, the best result was what they strived for all along—creating a deeper bond with their fans. "In the press box, it was great to look out and see all the fans instantly pick up their phones to start scanning the video boards," says Kegley. "That's one of the most exhilarating parts of trying something new—when you take a risk and quickly see desired results."

Because of the success from the Snapchat activation, the Vikings continued to use the Tagboard display throughout the regular NFL season. They even took their engagement a step further by utilizing amazing content from their Snapchat Spectacles.