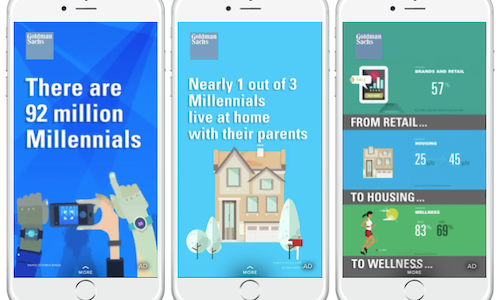 The primary objective of the partnership was to drive engagement with Goldman Sachs' content by leveraging Snapchat's web view attachment feature, while aligning with contextually relevant content from The Economist. We wanted to engage Snapchat users in a way they might not expect from Goldman Sachs by running 100% SOV takeovers in select stories. Knowing the themes of The Economist's Discover editions, we were able to map our content accordingly to create the optimal user experience.

Knowing the goal of the launch partnership was to drive engagement, when strategizing about what creative to use we prioritized one of Goldman's most engaging content formats – interactive infographics – and used Snapchat's web view attachment feature to host the infographic. Goldman Sachs' internal content team quickly got to work creating snap ads for the three infographics we planned to promote during the four-episode launch series, resulting in a total of 10x snap ads - with multiple versions for the US and UK. Select sponsorship weekends were hand picked to ensure we chose the most relevant creative for the episode theme.

The launch episode on 10/7 was focused on the economic growth outlook, the on-demand economy and what automation means for the future of jobs. Goldman Sachs' Millennials infographic lent itself particularly well to this theme as it's focused on forward-thinking issues like housing, transportation and marriage, and explains how Millennials are poised to reshape the economy.

Subsequent episodes of The Economist's channel focused on: Autonomous Vehicles (10/22), the World in 2017 (12/31) and Democracy in China (1/7). To capitalize on the tech focus of the autonomous vehicles episode, we promoted the Drones infographic, and ran the Millennials content again on 12/31 to align with the year ahead editorial content and explain what this particular generation's years ahead will look like.

The launch partnership far exceeded expectations, resulting in 917% impression over delivery and an average time spent with Goldman Sachs' infographic content of 63.4 seconds! The average swipe up rate was 14%, led by the Millennials content on launch weekend with a 17.2% swipe up rate. The launch episode was even more successful than anyone could have anticipated, generating 13x the volume of guaranteed impressions and an average of 80.4 seconds spent with the Goldman Sachs' content.

Performance spiked again during the fourth takeover on 1/7 with the Rise of China's New Consumer Class infographic. The snap ads drove a 13.4% swipe up rate with nearly 20x the guaranteed impressions. Users opted to spend on average 51.2 seconds with the infographic attachment.

On the backend, we even saw a large percentage of users navigate to other pages of GoldmanSachs.com within the Snapchat browser – they were so engaged with the infographic they had to get more of Goldman Sachs' content!

Users also spoke up on Twitter about how much they enjoyed Goldman Sachs' content in The Economist's Discover stories. This positive feedback was a welcome surprise, indicating that we reached a new audience who was impressed by our positioning and content. 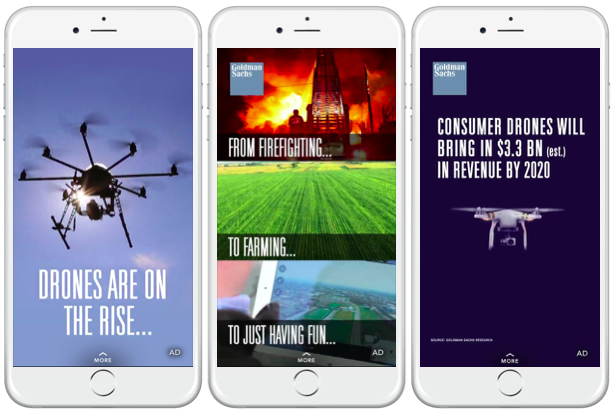 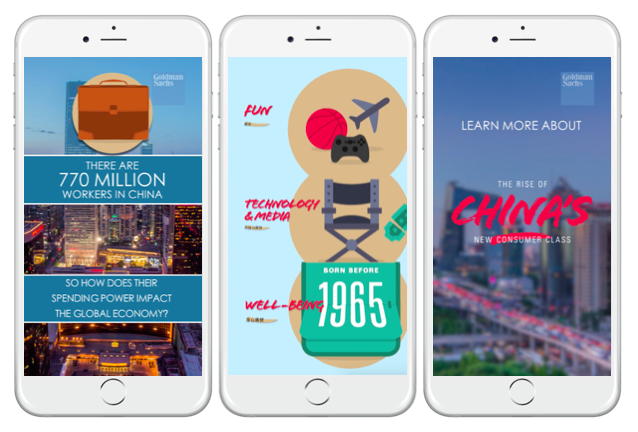 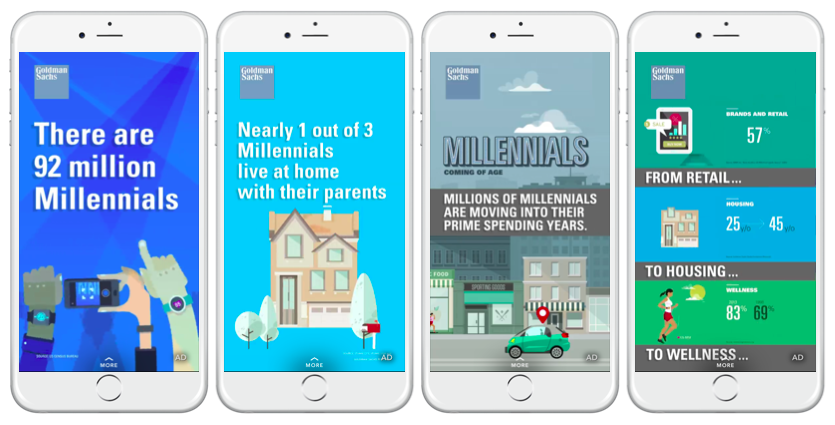 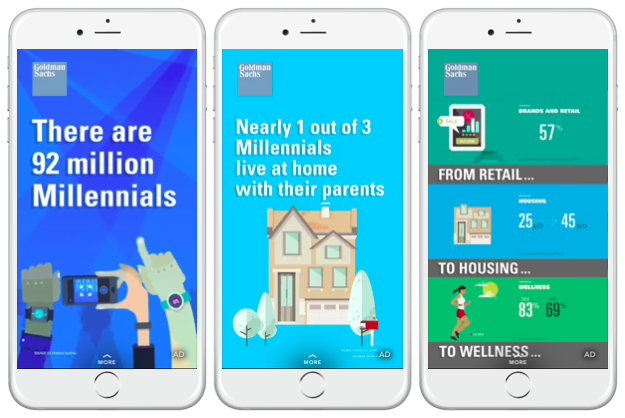