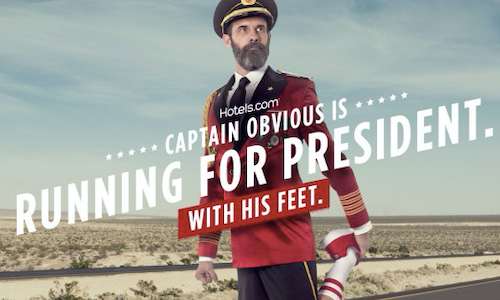 We made Captain Obvious, once just a phrase in popular culture, a walking, talking advocate for the brand. Pointing out all the things that make Hotels.com The Obvious Choice for consumers, in a way only he can. He proved the ideal vehicle by which to manifest the brand's cultural relevance.

To continue the Obvious Choice message into 2016, we needed memorable and engaging content that raised awareness all across the country. So Captain Obvious is lacing up his running shoes and joining the presidential race.

Captain Obvious heard there was a race for President and decided to run the best way he knows how, by actually running. When you're running across the country you need to stay in a lot of different hotels, and you need a simple way to book them. That's why Hotels.com is supporting Captain Obvious' presidential race.

Throughout Captain Obvious' race for President he is monitoring his own pulse and the pulse of the United States, satirizing the more culturally relevant pieces of the political climate in a lighthearted and obvious way through a variety of media – that was planned to impact and enhance our target around existing influencers, cultural moments and events such as the NCAA College Basketball Tournament and trusted bloggers. Our goal was to be a third party participant in a two party race.

Since the introduction of Captain Obvious Unaided Brand Awareness has increased, as well as the linkage between Captain Obvious Awareness and the Brand (BrainJuicer). The most recent campaign, Running for President, ignited a 900% increase in social mentions of Captain Obvious, many of these from people pledging their vote to him. As well as over 128 million views of his GIF content. Captain Obvious' Presidential run drove over 432.7 million earned media impressions, including national and local press. 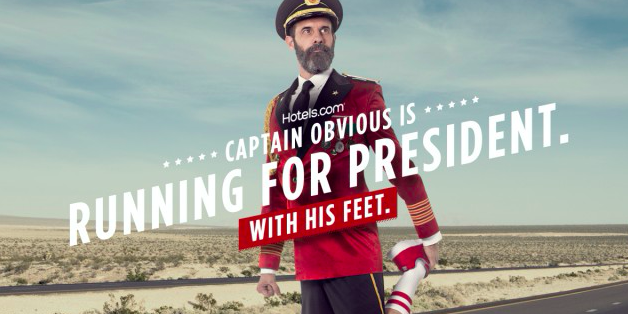