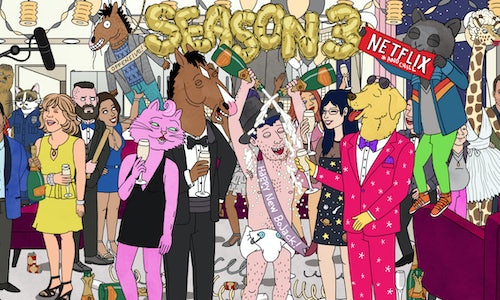 Season 3 was the moment where BoJack Horseman, washed-up alcoholic sitcom actor, became BoJack Horseman, critically-acclaimed alcoholic movie star. Fresh off his star-making turn in the Secretariat biopic, it seemed like BoJack had it all — but in fact, all that fame and attention only made him feel more isolated and depressed.

Netflix and Ignition partnered to create a campaign that extended BoJack's story to social in a way that no other show has ever done before. By doing this, we made BoJack Horseman more than just another animated comedy with outrageous jokes, killer writing, and fan-pleasing celebrity cameos — we turned it into a moving meditation on life, success, and what it means to find happiness in Hollywoo.

When it came to giving fans a taste of the jokes and storylines featured in Season 3, we wanted to do something beyond the traditional trailer. So we partnered with GIPHY to launch the world's first-ever GIF trailer, giving fans the opportunity to experience some of Season 3's funniest moments as pieces of easily shareable content.

Season 3 was riddled contained a wealth of references to social media, with ghostwritten tweets, accidental Instagram posts, and the Tumblrs of wannabe restaurant critics making up pivotal episode plot points. So weeks before Season 3 was even released, we worked these moments into BoJack's social profiles as Easter eggs for fans to find later on. Of course, within days of the new episodes dropping on Netflix, fans were thrilled to find that innocuous-seeming content from previous weeks was in fact part of our carefully constructed world.

How do you organically grow an audience of over 800k followers? While being a bonafide 90s celebrity may help, the real secret sauce is persistent kick-ass content, depressingly hilarious tweets, and custom in-world illustrations that help fans coast through the achingly long gap between seasons.

We interacted with fans daily on Twitter, and even through BoJack's personal Hotmail account, letting fans know that BoJack truly appreciates them appreciating him. His personal Twitter, Tumblr, and Instagram continue to be fully stocked with carefully crafted content, while the branded Facebook page contains a wealth of custom GIFs, fan-favorite show clips, and press reviews that keep our audience continuously engaged and invested in the daily happenings of their favorite Netflix and silver screen star.