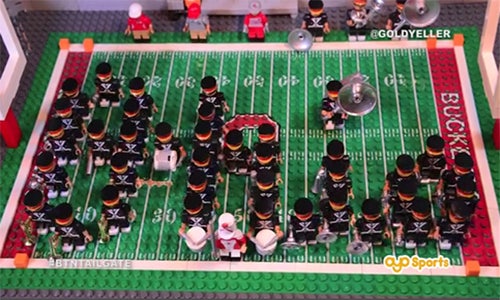 With the launch of a new Saturday morning pregame football show, BTN Tailgate, in the Fall of 2016, Big Ten Network (BTN) knew it would have to rely on new, custom, innovative, and 'snackable' content that was easily shareable in order to drive awareness for linear/streaming viewership and on-site attendance throughout the Fall. By developing a creative partnership with stop motion artist Jared Jacobs, a brand partnership with OYO Sports – the licensed collectible minifigures of the NCAA, and utilizing Big Ten video and audio rights, BTN was able to share weekly BTN Tailgate specific locations in a groundbreaking way.

By partnering with Jared Jacobs and OYO Sports, plus utilizing the network's video and audio rights, BTN would now be able to recreate an iconic football play/moment using OYO Sports minifigures. On a weekly basis, prior to each of the nine BTN Tailgate shows, Jared Jacobs would recreate the iconic football play/moment, ranging from to :20 - : 30 seconds, which routinely took Jared up to twenty plus hours to create.

BTN was tasked each week with deciding which iconic recreation would resonate the most for each specific school fan base. The focus for BTN was identifying a play/moment that took place at a home game to reinforce the communication that BTN Tailgate would be broadcasting live from that respective Big Ten city – such as the rich history of the Ohio State Marching Band dotting the "i" before each game at Ohio Stadium.

Each organically shared weekly recreation was amplified by BTN's school relationships, media outreach based off social media reach (11 Warriors), and former Big Ten athlete influencers (Kirk Cousins) in order to expand upon the digital/social footprint of BTN. In addition, BTN introduced each recreation on air and on BTN2Go.

BTN Tailgate enabled BTN to bring on five new sponsors, US Cellular, Geico, TIAA, Dairy Queen and Slim Jim. As a part of the sponsorship, the presenting sponsor each week was featured at the conclusion of the video, bringing visibility to the sponsors socially and on-air.

A total of nine videos were created, one for each week of BTN Tailgate.

The partnership between BTN, Jared Jacobs, and OYO Sports resulted in a benchmark digital/social initiative for BTN reaching more than 2.1 million people, garnering over 800,000 video views, and generating over 28,000 interactions across Facebook, Twitter, and Instagram, while helping to drive an estimated 18,000 fans through the BTN Tailgate footprint over the course of the nine-week BTN Tailgate programming schedule, which will be returning in 2017. 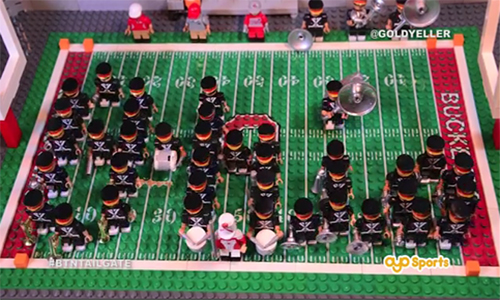