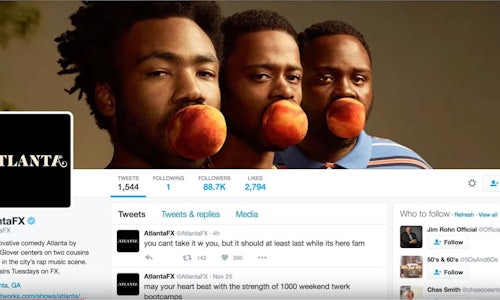 To promote the first season of Donald Glover's ground-breaking series Atlanta, FX was determined to try something different. Instead of using the Twitter account as a traditional marketing tool (posting promotional graphics and tune-in information), FX instead decided to use @AtlantaFX to introduce the surreal, hypnotic, and authentic world of the show. The goal was to create an account that existed within the unique landscape that Glover created and serve as a companion piece that was entertaining in its own right.

FX launched the account several months prior to premiere with a series of off-beat and poignant musings. These observations were casual with a fine-art twist, reflecting the tone and vernacular that fans would ultimately find in the show. Cloaked in mystique, the account began to grow in popularity as organic word-of-mouth spread about the mysterious new project from Glover and the bizarre, Sphinx-like quality of the show's Twitter account.

Shortly after its premiere, "Atlanta" became an instant hit and pop culture sensation, and the viewing audience caught on that following @AtlantaFX was yet another way to experience the show outside of television's boundaries. FX built upon the excitement by complementing the ephemeral musings with stylized gifs, live tweeting, and real-time content sharing.

On show nights, live tweeting was attacked differently from other shows and took on the feel of a fan watching along in real time, commenting with a cleverness that would generate highly shareable moments. As a result, the online community began to trust the account as a "woke" authority on all things Atlanta (show or otherwise).

This earned reputation and high bar on Twitter set the pace for the other @AtlantaFX accounts throughout the season.

As a result of this unique approach, #AtlantaFX trended on Twitter for nine consecutive weeks, and had the most engaged audience with over 780K Twitter mentions, 29MM Impressions and 165K Retweets throughout the course of the season. The account generated over 92,000 followers and continues to grow in the off-season.

As the Atlanta Twitter account grew in popularity, it would grow to become a pop culture phenomenon, engaging fans online and offline alike.