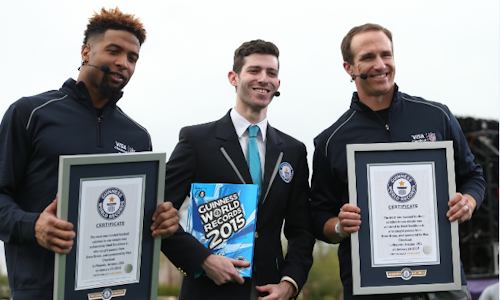 Visa has been a National Football League (NFL) sponsor since 1995. Over that time, the brand has steadily expanded its payment options to help its issuing bank customers stay ahead of consumer and merchant trends and needs. As online payment choices and competition proliferate, Visa introduced its Visa Checkout service to enable easier, faster checkouts to avoid a big pain-point for digital shoppers – having to re-enter their card number and shipping address every time. With this service, checkout is immediate and secure…so easy and fast you can do it with one-hand, as a Visa NFL commercial illustrated.

For hype, nothing competes with the Super Bowl. It's one of the most promoted, anticipated and watched events on the global sports calendar. Brands spend millions for an ad on what's become a competition within a competition, this one for consumer connection. NFL sponsor Visa faced this challenge head on and circled Super Bowl XLIX as "the" moment to culminate a season-long marketing campaign promoting its new Visa Checkout offering, driving awareness, consumer enrollment and merchant adoption.

Visa wanted to insert its new Visa Checkout service offering into the Super Bowl XLIX conversation in a way that would cut through the spectacular noise around America's most-hyped commercial and sporting event. And, without a $4.5 million ad-buy.

Building off equity generated throughout the NFL season, Visa leveraged the Super Bowl as a marquee platform to help drive awareness, consumer enrollment and merchant adoption for Visa Checkout as a way to improve online sales completions.

Visa research showed that online shoppers are seeking ease, simplicity and speed when they checkout, which is the beauty and basis for Visa Checkout as a payment tool. So easy, you can do it with one-hand and one click. As Super Bowl approached, PR needed to bring this benefit to life in a way that could move Visa Checkout to the front of the line as advertisers clamored for attention.

Visa enlisted quarterback Drew Brees and wide receiver Odell Beckham Jr. – known for completing a history-making one-handed catch – to set a world record for the most one-handed catches in a minute.

Visa Checkout is an easier way to pay online -- so easy, you only need one hand to use it. But how do you communicate that benefit during the most crowded time of year?

Our strategy was to show consumers and partners alike that Visa Checkout is as direct, fast and friction-free as a beautifully executed one-handed catch.

We put NFL wide receiver phenom Odell Beckham Jr. -- a football-catching juggernaut who earned the awe of a nation with a game-winning one-handed catch -- at the center of a stunt to set a world record for one-handed catches in a single minute. Then we built earned, paid and social amplification around the attempt.

Visa enlisted Brees to throw and Beckham Jr. to catch, and partnered with ESPN to cover the attempt live. We engaged Guinness World Records to adjudicate the attempt, and worked with advertising, media and social media partners to amplify it across channels.

On Thursday, Jan. 29, before Super Bowl weekend kicked off, the stunt was executed on ESPN's "NFL Live" from Phoenix (Super Bowl host city) with ESPN hosts interviewing the athletes about the attempt, Visa Checkout and call-to-action for consumers to enroll. "NFL Live" devoted another five minutes to the record attempt itself, with a live audience counting each pass completed. Throughout the 10-minute segment, product branding and campaign hashtag #CheckoutODBrees appeared on screen. Throughout the week, ESPN Radio shows cross-promoted the event.

Before the stunt took place, Visa pitched ESPN sports business reporter Darren Rovell to break the story (that the record attempt was taking place) and partnered with EA SPORTS' Madden franchise to promote the record across its social channels, sparking conversation among media and fans.

Odell caught 33 one-handed passes in a single minute, stirring fans, college and pro football players to try to beat his record, setting off a flurry of fan-created video reenactments.

Within minutes of setting the record on ESPN, #CheckoutODBrees was the #1 trending topic on Twitter nationally and #2 globally, as well as #3 on Facebook. Social amplification efforts resulted in over 130 million social impressions.

And, by leveraging its NFL sponsorship throughout the season and at the Super Bowl to educate and drive action, Visa has seen millions of Visa Checkout accounts created, more than 150 of the largest and most important online retailers sign up to accept Visa Checkout, and for these merchant partners, a significantly higher 70% sales completion rate among users. 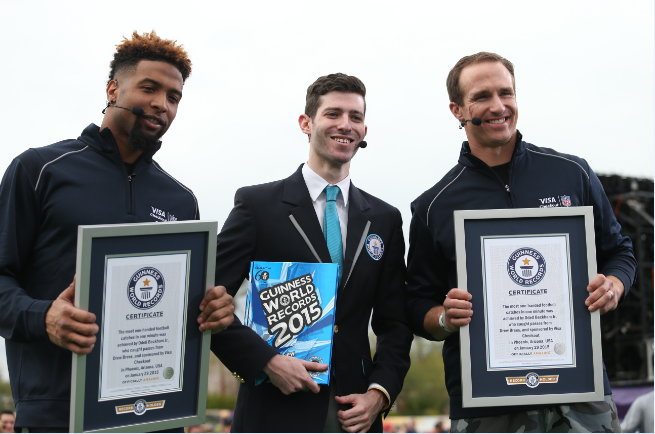 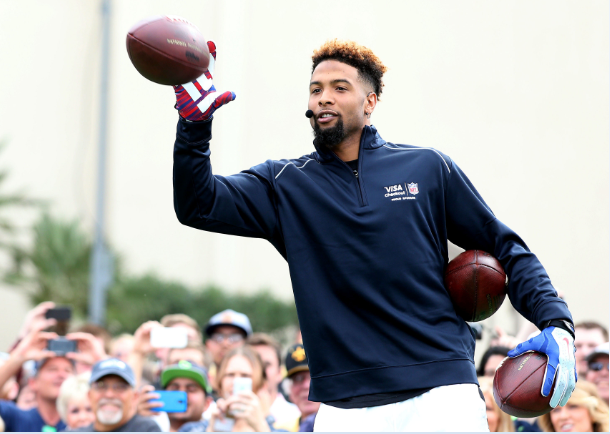