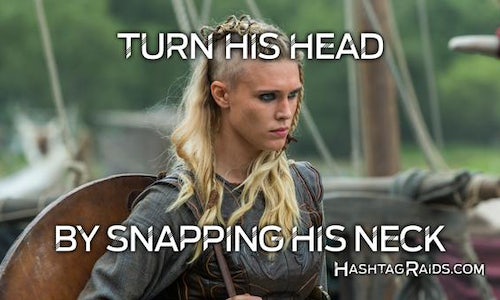 HISTORY's hit show 'Vikings' had built a strong following over its two previous seasons, resonating among male Millennials for its epic depictions of historic battle scenes.

HISTORY needed to find a way to reach a broader, more mainstream audience to increase viewership of its Season 3 premiere. The show specifically needed to find a foothold among female Millennials who may have previously been turned off by the blood and gore, and who were unaware of the show actually being a drama with fantasy as a backdrop – distinguished by exceptional storytelling, characters and historical depth.

Our strategy was to bring Vikings into the modern day by "ransacking" pop culture through a series of "Hashtag Raids" in social media. Mimicking real-life Vikings, we encouraged fans to launch coordinated attacks on popular hashtags in social, "conquering" them with 'Vikings' content. In the process, we unleashed buzzworthy content in social, attracted a broader audience to 'Vikings' and challenged misperceptions about the show.

We launched our campaign with an epic video compilation of Vikings battle cries and a raid on #ManCrushMonday, followed by attacks on #ThrowbackThursday, #ReactionGifs and #SWAG across Twitter and Tumblr.

We carefully selected each hashtag for its relevance to Vikings behavior – #ManCrushMonday, for example because Vikings – especially the leading female character, Lagertha – literally crush men, and it is one of the most popular hashtags among Millennials on Twitter.

We then created custom content themed to both 'Vikings' and the respective hashtags, to bridge the gap between the show content and popular Millennial social behavior. And we created a microsite, HashtagRaids.com, filled with an armory of weapons including 'Vikings' memes, GIFs and Vines for fans to use during #VikingsRaids – empowering them to participate, co-create and share.


Join me & @HistoryVikings in an epic hashtag #raid tomorrow morning – check back with us before 1PM EST! pic.twitter.com/NNlOOQrRTG
— Clive Standen (@CliveStanden) February 15, 2015

She has man-crusher written all over her face. In blood. #Raid #ManCrushMonday #MCM @HistoryVikings Premiere 2/19 pic.twitter.com/EsBVWV1yxo
— Allegra Fortin (@argella1300) February 16, 2015

During each raid we ran a war room, engaging with fans in real time and rewarding participants with customized content on Twitter and Tumblr. Beyond these platforms, we promoted the raids on Facebook and Instagram. To encourage participation, we partnered with the biggest stars of the show and influential powerfans, influencers and content creators to drive people to HashtagRaids.com.

Influencers from Hitfix, Fitfluential and Tumblr incentivized their followers to share exclusive weapons during the raids via contests (Twitter Parties) giving away 'Vikings' branded swag. In addition, content creators created original artwork to be included as weapons on the site.

Our goal was to give the show broader appeal, especially among female Millennials, and increase viewership for the season premiere. We looked at conversation, ratings and audience year-over-year metrics to measure success.

During our first #ManCrushMonday raid, 'Vikings' owned 83% of Twitter conversation and had the top associated hashtags. Superfans returned to #hashtagraid again and again for each of our four raids, helping us engage more than 130 million people in social, with more than two-thirds of raid participants representing our target audience of women in their 20's and 30's. This army of 'Vikings' fans helped boost conversation around the show by 10% year-over-year. We were able to broaden the show's appeal among Millennials and women, successfully reducing the audience gender gap by 4%.

As a result of ransacking the Twitterverse with a Vikings-style raid and co-opting popular hashtags, the Season 3 premiere of 'Vikings' finished as the #1 telecast on cable across all key demographics and gave HISTORY.com its best premiere day ever. 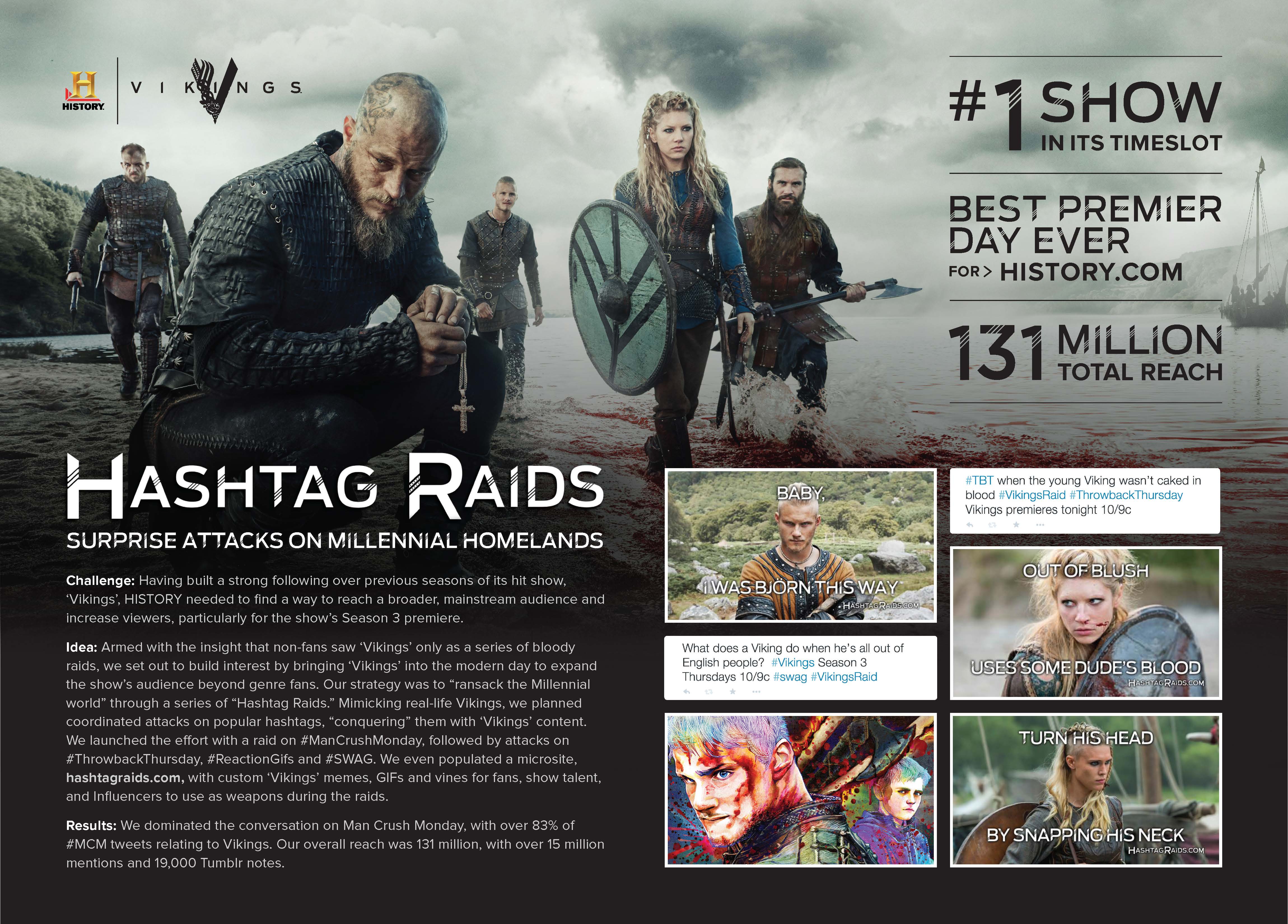 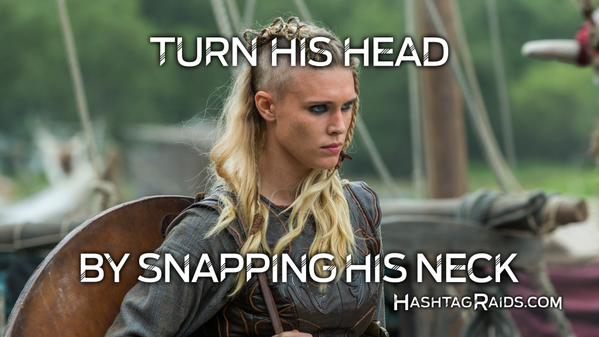 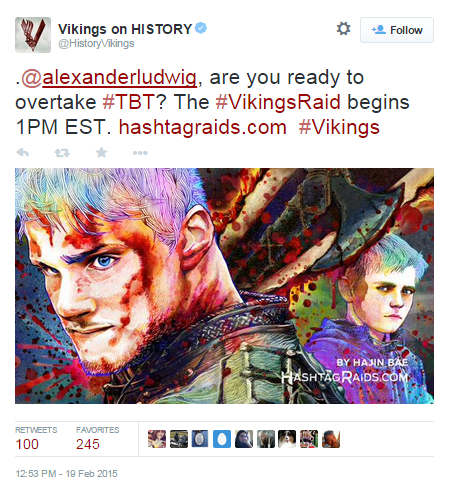 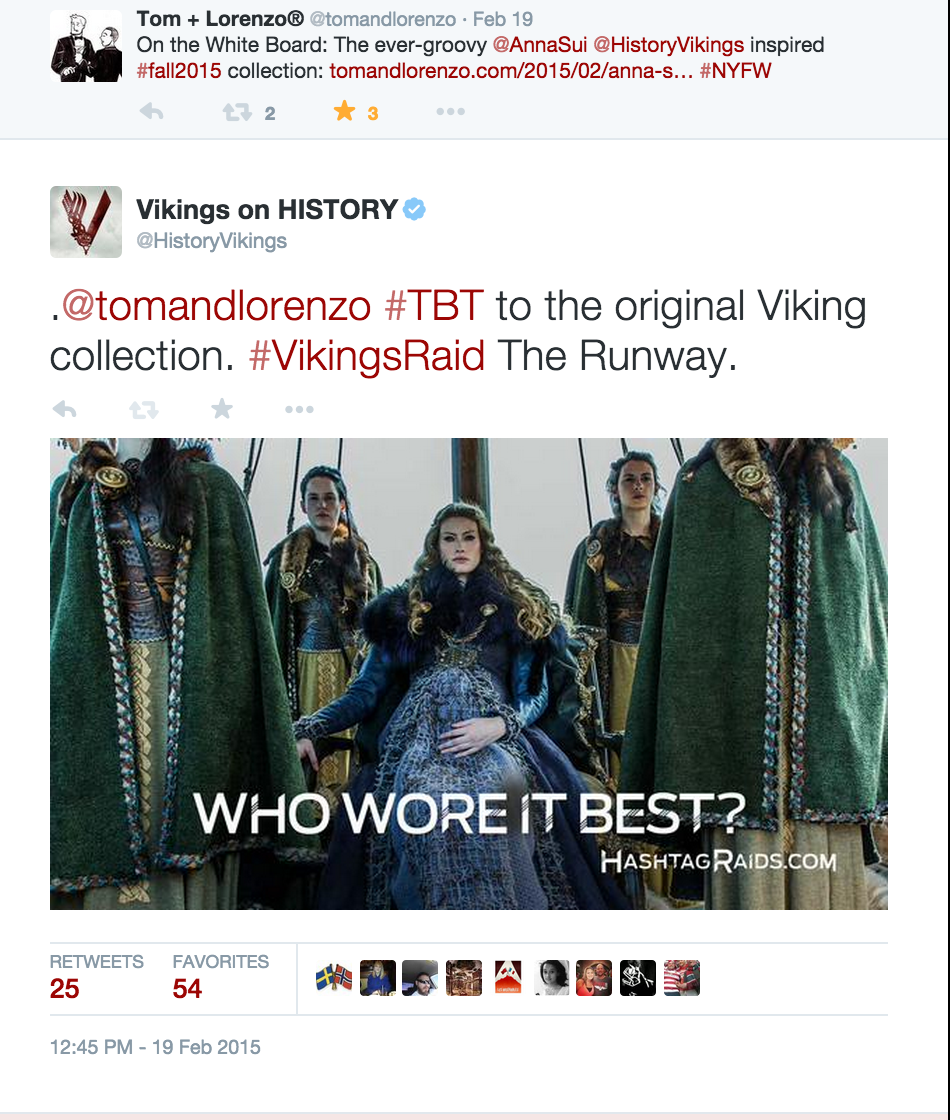