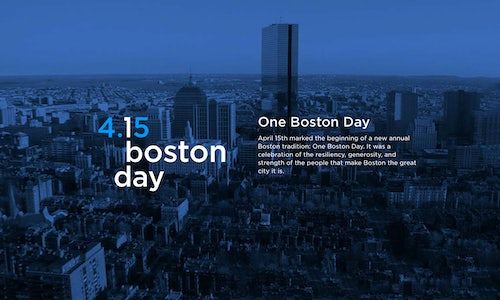 This was the second anniversary of the Boston marathon attacks. Rather than focusing on the tragedy, Boston Mayor Martin Walsh wanted to create a new tradition that focused on the city's strength, and the spirit of community it demonstrated as it came together in the days and weeks that followed.

The city engaged us to help develop the concept for new tradition, including the name, branding, web and social presence, and activation strategy. We set out to inspire people to show the love they have for their city, their communities and their neighbors.

This was the second anniversary of the Boston marathon attacks. Rather than focusing on the tragedy, Boston Mayor Martin Walsh wanted to create a new tradition that focused on the city's strength, resilience, and the spirit of community it demonstrated as it came together in the days and weeks that followed.

The City of Boston engaged us to help develop the concept for a new holiday. We set out to inspire people to show the love they have for their city, their community and their neighbors.

To that end, we created and branded One Boston Day.

This would be a day for the community to remember and reflect. To greet our neighbors. To lend a hand. To reach out, give back, and go above and beyond. To epitomize the spirit of the city we love.

The challenge was introducing this day and engaging the community with no paid media. We leveraged earned media, donated inventory and word of mouth to encourage individuals and organizations to commit acts of kindness and generosity, large and small, and share their actions and reflections on social media. We designed and then open-sourced a logo for the day, allowing other people and organizations to take and remix it in their own expressions.

We created print and OOH executions for ad space generously donated by local media, such as the Boston Globe and WGBH. And we developed assets for City Hall and its partners to use in their own outreach to the media, nonprofit and private sectors, and local, state, and national government.

All of this work came together, from first conversation with the City to the day itself, in 33 days.

The response from the community was staggering.

Dozens of organizations and groups participated in their own ways. The St. Francis House collected sneakers for homeless men and women. Students at Joshua Eaton Elementary wrote letters of thanks to local first responders. The Sheraton Hotel hosted an all-day blood drive with the Red Cross. Churches across the city rang their bells in unison at 2:49pm. At that same moment, the Red Sox interrupted play to hold a moment of silence during a nationally-televised game.

And thousands more individuals participated in smaller ways. They bought coffee and meals for strangers, helped ensure pedestrian safety at dangerous intersections, and created banners sharing their personal reflections on the day.

Online, the conversation was overwhelming. There were over 42,000 posts on social media about One Boston Day in 24 hours, generating over 225 million impressions. It become a #1 trending topic nationally on Twitter. National figures, celebrities and influencers showed their support, including President Obama, The White House, VP Biden, John Kerry, Elizabeth Warren, Michael Bloomberg, Mitt Romney, Mark Wahlberg, Jon Lester, and many more.

The website drew over 26,000 unique visitors in 24 hours. Over 4,000 people downloaded the branded social icons and logo assets.

This was a momentous start to a new annual city-wide tradition.

Since its founding, Boston has served as a beacon of hope and strength for the rest of the world. Every year now, on April 15th, the world will know that Boston's flame burns as brightly as ever. 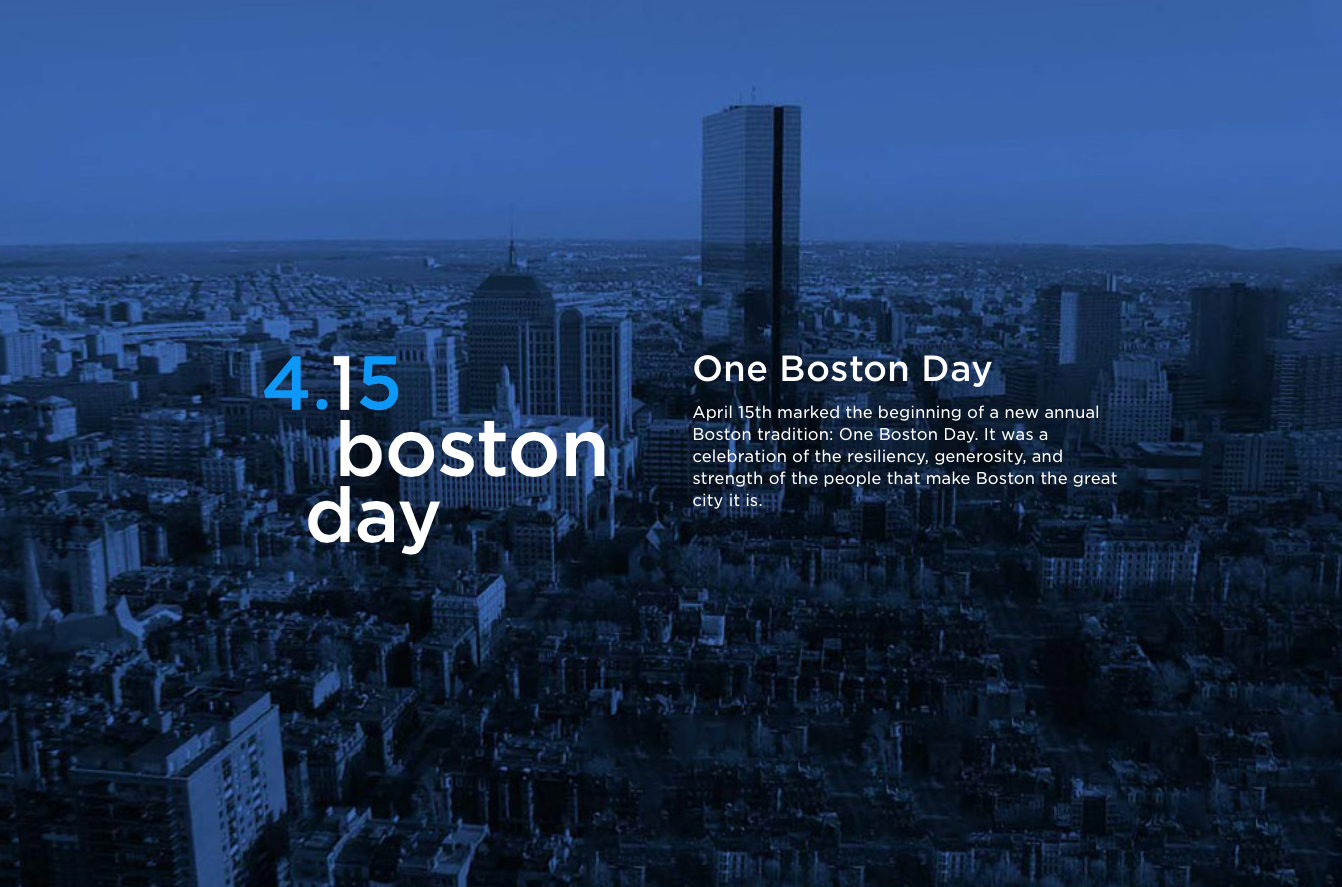