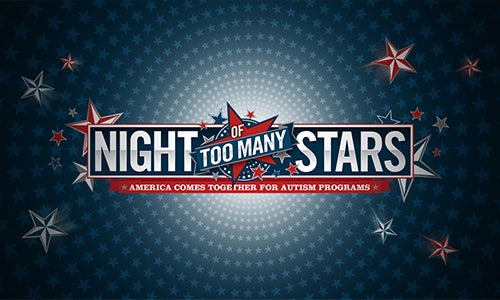 NIGHT OF TOO MANY STARS – AMERICA COMES TOGETHER FOR AUTISM PROGRAMS

Throughout the event, fans were given countless opportunities to engage with their favorite stars on numerous platforms. Using the #NightOfTooManyStars hashtag, fans tweeted stunts they wanted to see the celebrities perform -- and the stars did not disappoint. John Hodgman Googled nude pictures of Susan Sarandon while sitting next to the actress herself. Everyone onstage yelled out the age at which they lost their virginity. And one of the stunts sparked the #TwizzlerChallenge, a nationwide phenomenon that inspired some of America's biggest stars, including J.J. Abrams, Rihanna and Jimmy Kimmel, to pucker up for autism awareness. Viewers even had the chance to win a melted dildo used during the filming of "Broad City" by tweeting @ComedyCentral a reason why they deserved it.

Multiplatform stunts ensured that the audience stayed invested in the cause before, during and after the live telethon. The centerpiece of this year's interactive fundraising efforts was a partnership with Omaze, a startup that specializes in executing once-in-a-lifetime experiences for charitable causes. The creative team behind NOTMS took the Omaze model and pushed it to its fullest potential, organizing stunts that comedy fans could only dream of.

We gave a fan the opportunity to be drawn into an episode of "The Simpsons" by Matt Groening. For fans of "Harold & Kumar Go to White Castle," we reunited John Cho and Kal Penn, offering up a chance for a lucky donor to have a burger named after him or her and get free burgers for life. Followers of Jon Stewart's tenure as host of "The Daily Show" got a shot at tickets to his last show. Other available prizes included the chance to become a Milwaukee Buck for a day, tickets to the "Roast of Justin Bieber" and the opportunity to have Judd Apatow direct a Vine for you. The alliance proved to be a winning one, raising over $2 million for NOTMS and NYCA.

NOTMS held an auction hosted on eBay, which gave superfans the chance to bid on props, prizes and experiences that couldn't be found anywhere else. Donated items included an ant farm signed by "Ant-Man" star Paul Rudd, VIP tickets to "The Book of Mormon" and a set visit to "The Jim Gaffigan Show." Comedy Central led the charge on-air during the telethon and on social to promote each listing.

NOTMS harnessed the star-power of its celebrity volunteers to spread awareness far and wide. In a surprise reunion, "Happy Gilmore" stars Adam Sandler and Bob Barker faced off in a video that went viral days before the telethon. A duet between Jodi DiPiazza, a young musician with autism and "Weird Al" Yankovic became the most talked-about clip on the Internet.

#NightOfTooManyStars was the #1 trend on social throughout the night, and a Snapchat story gave viewers an exclusive look at the show. It all came together on cc.com, which served as a hub for videos, donations, stunts and auction as well as a place for cord-cutters to view a live stream of the event.

The big picture? A heartfelt, multiplatform, fully interactive entertainment experience that raised funds for autism programs to the tune of a record-breaking $5.2 million and counting -- proof of Night of Too Many Stars 2015's place at the forefront of multiplatform television, killer comedy and philanthropy.