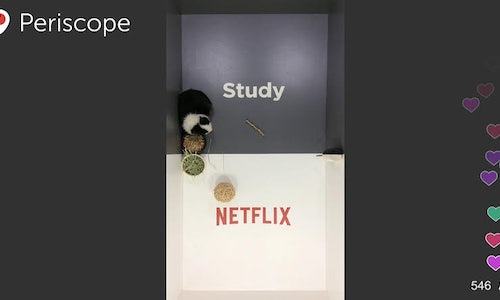 Netflix noticed a recurring social conversation that happened during every finals week: students couldn't decide if they should study, or watch Netflix. To help them make a decision about how to spend their time we created The Finals Guinea Pig.

Every year at finals time we see the same struggle. College students need to study. But they want to watch Netflix.

To solve their debate, we created The Finals Guinea Pig. A helpful decision engine not powered by an algorithm, but by a living, breathing guinea pig.

Because our decision engine was alive, it needed a live broadcast platform to house it. We choose the newly launched app Periscope after witnessing its amazing adoption rate in the first months after it went live.

The Monday of finals week we started livecasting the Finals Guinea Pig and immediately it was a hit. Students flocked to the feed to watch our guinea pig tell them what to do. They wanted to talk to him, ask him questions, they even named him. When we revealed a stunt animal they went ahead and named him too. Word about our live feed spread across college campuses, across the globe, even across the desk of tech giants like Chris Sacca.

All thanks to students who embraced a guinea pig, on a new live-broadcast mobile app, as their college advisor.

In the 2.5 days we livecast the Finals Guinea Pig on Periscope it received 34,000 live views, earned more than 210,000 hearts, and grew the Netflix Periscope follower base by more than 2,000 new followers.

Video for The Finals Guinea Pig 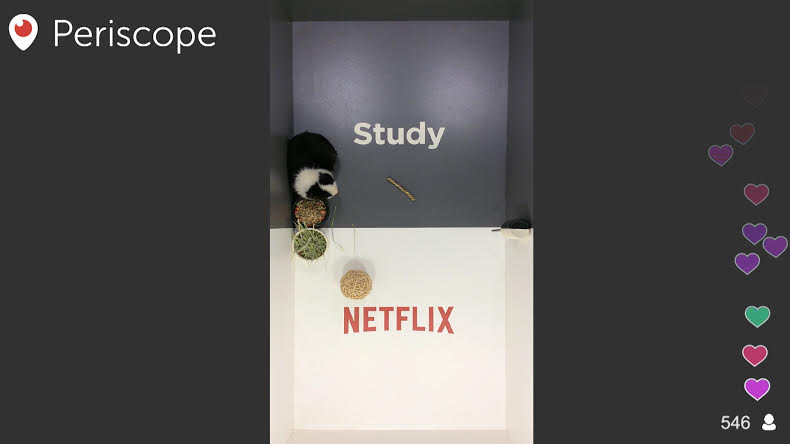