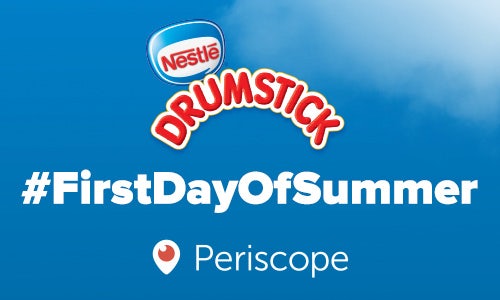 Drumstick's mission is to spread the carefree spirit of summer. On the brand's most ownable day of the year, the first day of summer, Drumstick utilized the new live-streaming technology from Periscope to showcase iconic summer moments.

Periscope was a perfect platform for Drumstick's "Happy Treater" target audience - pragmatic people who use snacking and treating in everyday ways to feel comforted, joyful and share these moments with others. "Happy Treaters" truly view snacking as one of life's pleasures – not having their favorite snacks at even a casual get together is like a friend's absence.

The primary objective was to reinforce Drumstick's role in summertime moments in the minds of consumers by demonstrating the brand's carefree personality through engaging content. The secondary objective was to capitalize on the buzz surrounding the new Periscope technology with a test-and-learn campaign to drive key learnings for all of Nestle.

The team set out to learn three key things: 1. What types of content resonate on Periscope? 2. How can a brand best use influencers on Periscope? 3. What are the best methods for paid media support?

With Drumstick's brand purpose being 'To Spread the Carefree Spirit of Summer,' its most ownable day is, of course, the first day of summer. The functionality of Periscope gave the brand the ability to truly own this day in a unique way and create content that was relevant to their consumers in real-time.

The creative idea behind this activation was to live stream 'iconic summer moments' on the first day of summer, which included backyard barbecues, a visit to an amusement park, parasailing at the lake, a cannonball contest at the pool, and many more. All locations were scouted by the Smith Brothers team to ensure that a connection would be available for the Periscope app. Videos would be filmed via team members' mobile phones. These live moments would be promoted via Twitter, leveraging a targeted paid strategy to the brand's target consumers, who were most likely to engage with a live video.

Smith Brothers produced 21 live videos in 12 hours at five locations (beach, amusement park, city, backyard and lake). Twitter posts with images were created in real-time with images from each location to promote each broadcast with paid support. Broadcast links were shared with influencer networks to promote. This is what made the program unique – Drumstick was the first brand to add paid Twitter support as a work-around to promote Periscope content. Note that at the time of execution, Periscope did not accept paid advertising within the platform.

Key Performance Indicators (KPIs) were set at the beginning of the program. Smith Brothers and partners exceeded all KPIs and met all objectives.

Objective 1 - Demonstrate Drumstick's personality on its most ownable day (the first day of summer), using new live-streaming technology to showcase the carefree spirit of summer.

68 hrs and 41 min of branded videos watched by consumers

Objective 2 - Capitalize on the buzz surrounding a new technology - Periscope

Nestle Drumstick and Smith Brothers Agency capitalized on a new social platform, and launched the FIRST EVER brand- produced, media-supported Periscope campaign. The team's curiosity to continue to understand the ever-changing digital environment, coupled with the brand's speed to market to activate on this new platform and generate learnings fast, was crucial in the success of this Periscope test-and-learn campaign.

The program was covered in AdWeek touting the program as "first of its kind." 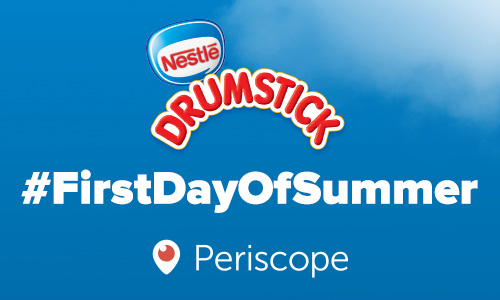