As the Supreme Court prepared to hear several cases about the future of nationwide marriage equality, the Human Rights Campaign (HRC), the nation's largest LGBT civil rights organization, looked to elevate the conversation of marriage equality across the nation. Our goal was unprecedented: We aimed to have the largest brief ever submitted to the Supreme Court, engaging hundreds of thousands to take action in support of loving, committed same-sex couples. We wanted to give all Americans the chance to make their mark on the fight for LGBT rights.

As a leader in the fight for LGBT rights and equality, HRC wanted to give Americans the opportunity to have their voices formally heard in a civil rights case of this magnitude. HRC's marketing team conceived and led the campaign for the People's Brief, the first-ever legal brief where every day members of the American public could petition the Court in support of marriage equality.

Over the period of a month, HRC kept our followers informed every step of the way. HRC recruited Robbie Kaplan, the famed attorney who helped to strike down Defense of Marriage Act (DOMA), to write the brief and Edie Windsor, LGBT heroine in the DOMA case, to be the first signatory. HRC kicked off the campaign with a video of the pair to introduce the brief and followed it with a count down to the deadline with image shares and gifs, constant reminders, such as blog posts, outlining the struggles of the plaintiffs, sharing inspirational quotes from people like President Obama and Supreme Court Justice Ruth Bader Ginsburg and celebrating the final product and result, even the printing and delivering process with named plaintiff Jim Obergefell.

With this content in play, HRC built a robust public relations and digital campaign, engaging every day Americans to sign the brief through email, social and video content. HRC shared 50 posts on Facebook, over 25 tweets and 10 photos on Instagram all relating to the People's Brief. Our consistent posts on Twitter, Instagram, Snapchat and Facebook allowed our millions of members, supporters and followers to get involved and be a part of history.

HRC tapped into our vast network of social media followers and influencers, as well as our high-profile members and supporters to amplify our online outreach that spanned across several digital platforms. We were able to share content from several celebrities and used personal stories to motivate our followers to take action and reignite the conversation around marriage equality.

With 207,551 signatories calling for full nationwide marriage equality, the brief was the largest public brief ever submitted to the Supreme Court.

With all of the signatures, each copy of the People's Brief was approximately 3,500 pages long, for a total of approximately 175,000 pages. It required four days of round-the-clock printing in order to complete the 50 copies required by the Court in time for the March 6 deadline for amicus briefs. Nineteen boxes were delivered to the Court.

Over 50 celebrities, such as Ellen DeGeneres, Ricky Martin and Matt Bomer, signed on and shared the People's Brief. The People's Brief was also shared in over 250 news sources. Our content on social media also gathered hundreds of thousands of interactions and our Facebook videos rapidly gained thousands of viewers.

It was shared across the globe with HRC's 1.5 million members and supporters, gaining signatories from all 50 states as well as Puerto Rico, Guam, American Samoa and the U.S. Virgin Islands.

When the Supreme Court decided in favor of marriage equality on June 26, 2015, it was clear that the People's Brief, as well as all of the signatories, will forever stand on the right side of history. 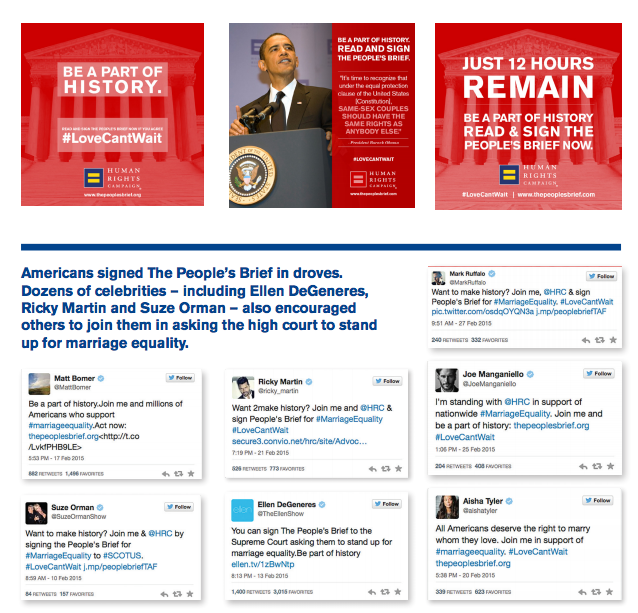 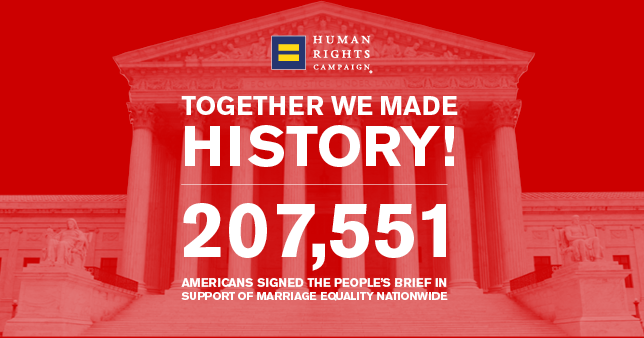