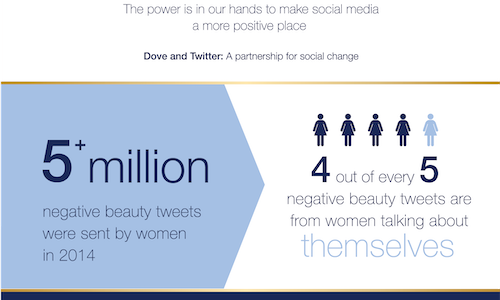 Dove has been committed to making beauty a source of confidence, not anxiety, for the past 10 years–but over the course of that time, the beauty landscape has drastically changed.

Ideas and opinions about beauty are now shared through social media feeds every second—we are, effectively, crowdsourcing a new definition of beauty—but women don't fully realize the power of their posts.

Women posted 5 million negative Tweets about beauty and body image in 2014 alone, and are two times as likely to say something negative about themselves than positive on Twitter.

In a world connected by social media, women casually compose Tweets that can be hurtful, damaging, or critical—to themselves, to others, and to society. These negative conversations—coming from friends, family, celebrities, and advertisers—fill feeds and minds with self-doubt, serving to hinder women on their journeys to beauty confidence.

In 2015, Dove and Twitter set out on a mission to transform that reality, inspire behavioral change, and ignite a cultural shift in the beauty conversation on social media by encouraging women everywhere to #SpeakBeautiful.

Since the #SpeakBeautiful campaign was born out of an insight into how women speak on Twitter, creating the right hashtag was essential to campaign success. With #SpeakBeautiful, we created a hashtag that not only serves as a consistent identifier for our campaign, but also encapsulates the campaign's essence. #SpeakBeautiful treats the idea of beautiful self-talk as a language that all women can and should learn to speak. The hashtag also serves as a simple call to action, stating exactly what we want women to do.

To trigger a meaningful shift in the beauty conversation, we launched with a big splash, joining forces with Twitter in a partnership for social change. We identified the Oscars as the perfect launch moment, given that it's not only the biggest red carpet event of the year, but that it's also a huge night for beauty dialogue on Twitter.

We kicked off the campaign with a 30-second commercial during the 2015 Oscars red carpet to drive awareness, highlighting Tweets from real women to spell out the problem. The ad urged women everywhere to join Dove and Twitter to turn negative Tweets into positive ones, highlighting the #SpeakBeautiful hashtag alongside our call-to-action and reinforcing use of the hashtag among women who saw the spot. #SpeakBeautiful swept Twitter as a U.S. trending topic during the Oscars, and again during our next major activation around the MTV Video Music Awards ("VMAs").

During both Oscar night and the VMAs, we responded to those using the hashtag with image templates highlighting their positive words. We also used the hashtag as a way to communicate to people who weren't speaking positively. Using a proprietary Twitter-developed tool, Dove community managers uncovered real women's comments about beauty and body image and provided one-on-one encouragement to help them #SpeakBeautiful, introducing a new group of women to the hashtag.

As part of the partnership with Twitter, Dove was the first brand to use their Reverb tool, which allowed us to measure the usage of #SpeakBeautiful on Twitter throughout Oscar night. We used Twitter Niche influencers to bring our message to life in a relevant way and amplified our message further by promoting #SpeakBeautiful Tweets to those who were talking about the Oscars or beauty.

After the Oscars, we promoted #SpeakBeautiful as a trend, calling for women to send body confidence questions to us using the hashtag. We partnered with self-esteem influencers to create video responses to these questions, arming women with the tools to speak about beauty more positively.

#SpeakBeautiful became a movement beyond just the Oscars, extending to other events like the MTV Video Music Awards, as well as the everyday. Based on Twitter research showing that beauty confidence is lowest during mornings, Mondays, and weekends, we created content specifically for those moments when women needed it most. Targeted Twitter promotion enabled us to reach women during these key windows, effecting change day-by-day, week-by-week.

The results exceeded expectations -- most importantly, we stimulated a behavioral change on a mass scale through #SpeakBeautiful.

People understood the hashtag intuitively and were inspired to get involved, using it naturally in their everyday Tweets. Throughout 2015, women used #SpeakBeautiful more than 168,000 times and drove 800 million social media impressions of the campaign.

Inspired by the hashtag, women created Twitter accounts to spread positivity, highlight their triumphs, and even write #SpeakBeautiful slam poetry. Celebrities including Arianna Huffington and Amy Poehler joined the conversation as well, sharing their own messages of beauty positivity.

Our hashtag led to a huge change in the way women talk online, with negative Tweets about beauty and body image sent by women dropping from over 5.3 million in 2014 to 3.4 million in 2015–a 36.8% decrease year over year.

We also impacted change during key event activations, with Twitter reporting real changes in conversation around the Oscars and VMAs. From Oscars 2014 to 2015, women posted 30% fewer negative Tweets and 69% more positive Tweets about themselves. Similarly, beauty conversation around the VMAs was 76% positive, up 14 points from 2014. #SpeakBeautiful also swept Twitter as a U.S. trending topic during both nights.

In addition to changing the beauty conversation online, we changed how people thought of the Dove brand. According to Twitter, the #SpeakBeautiful campaign drove affinity for the brand, with brand sentiment increasing 17%. 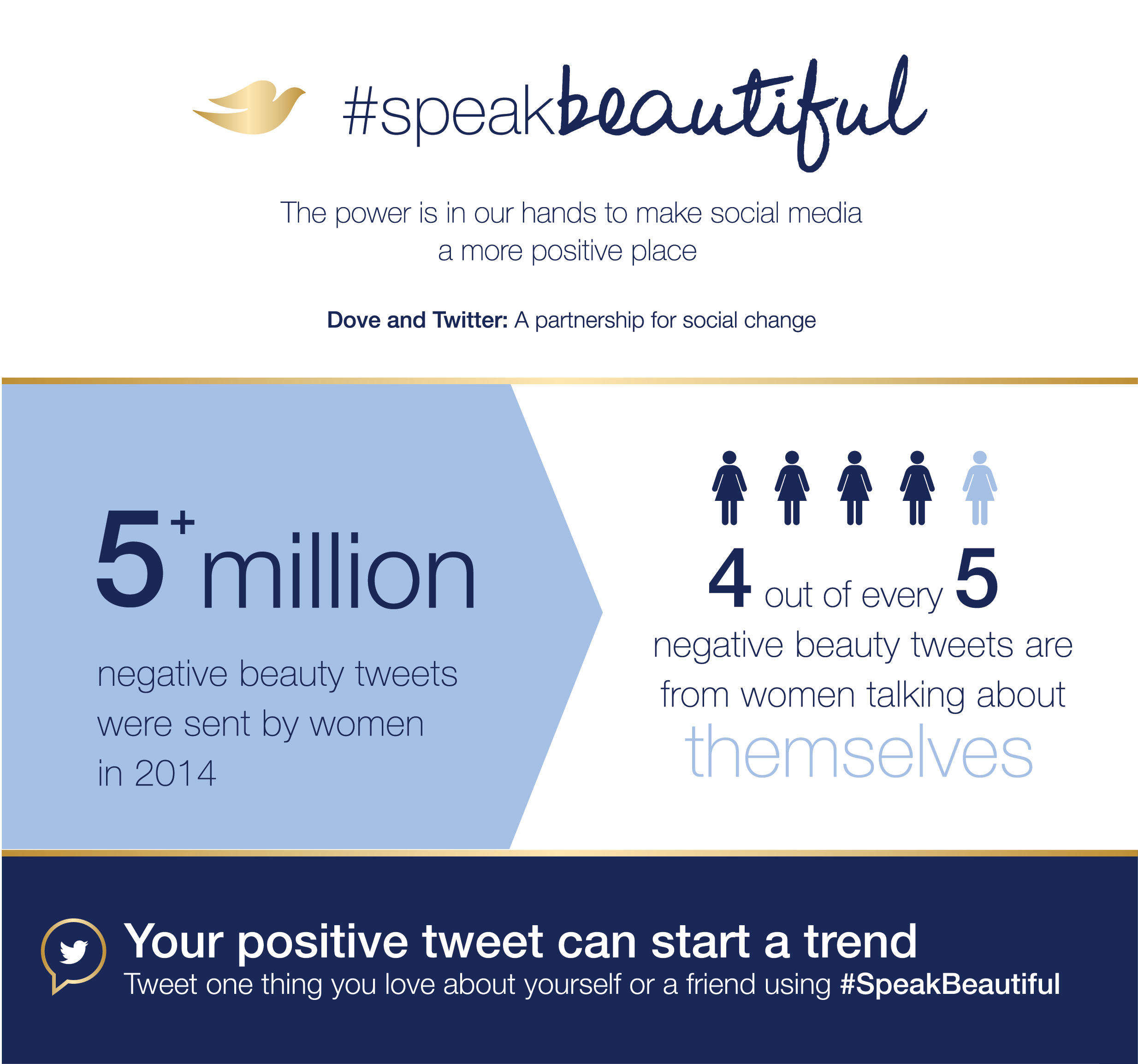 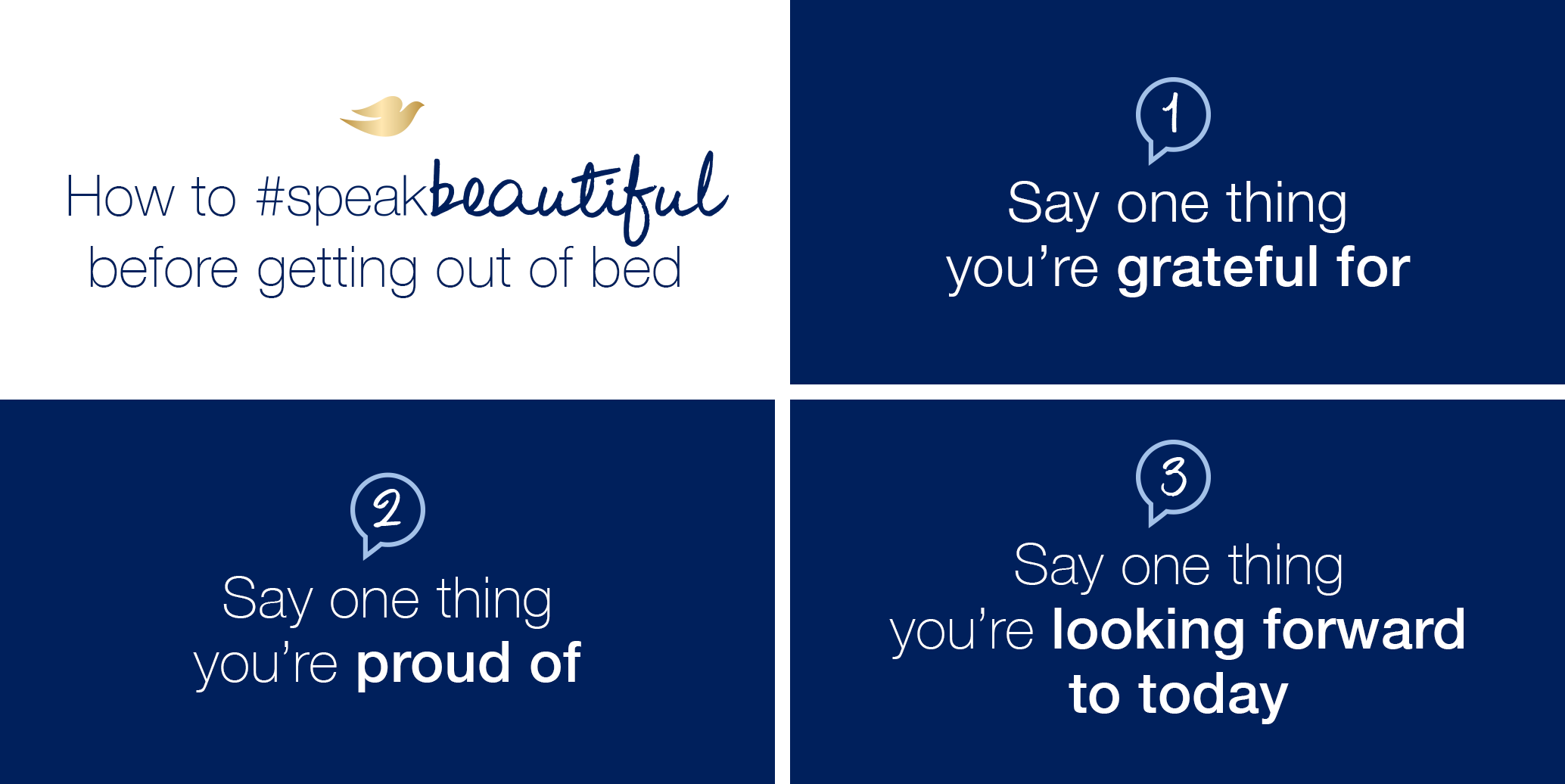 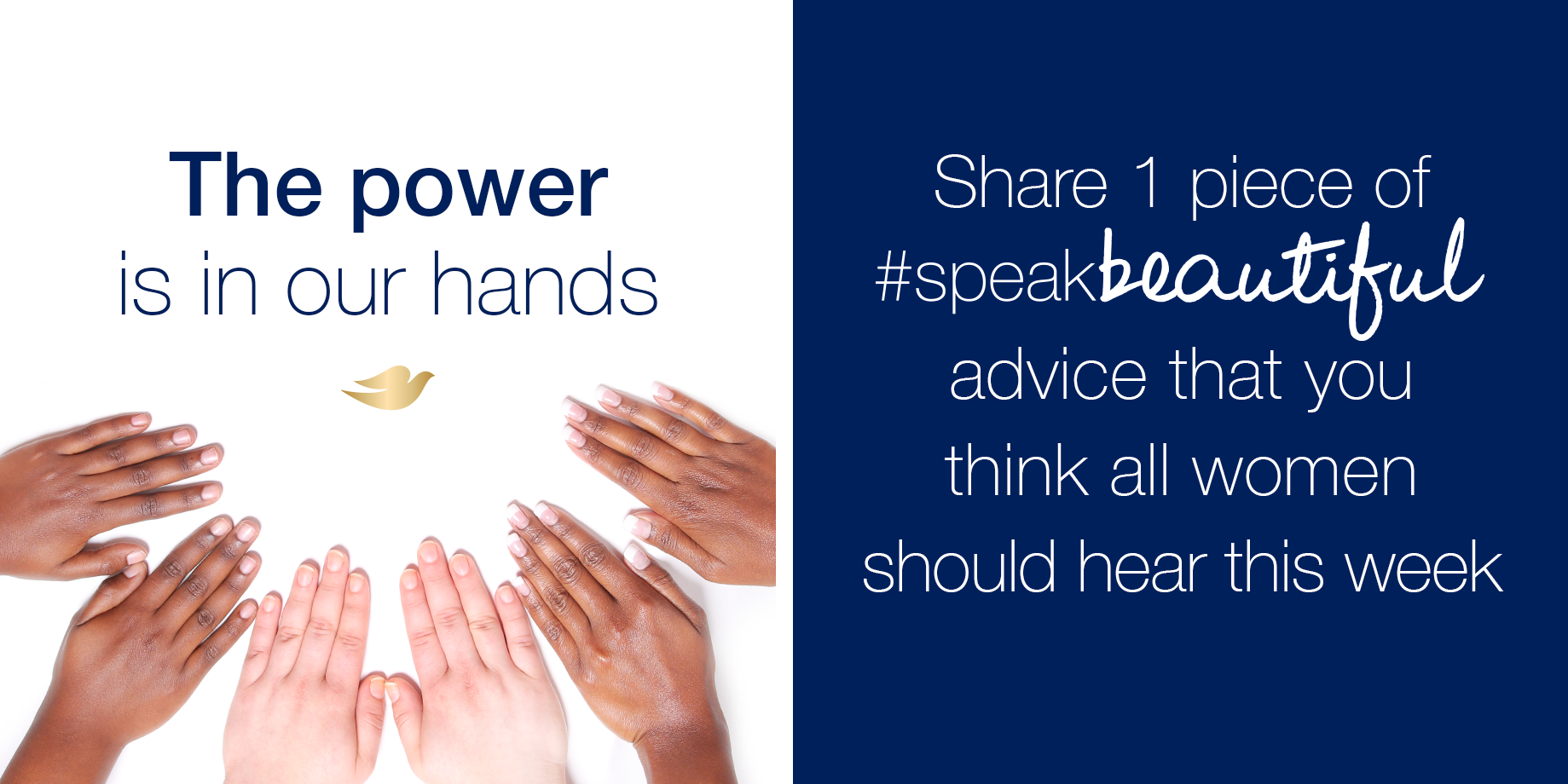 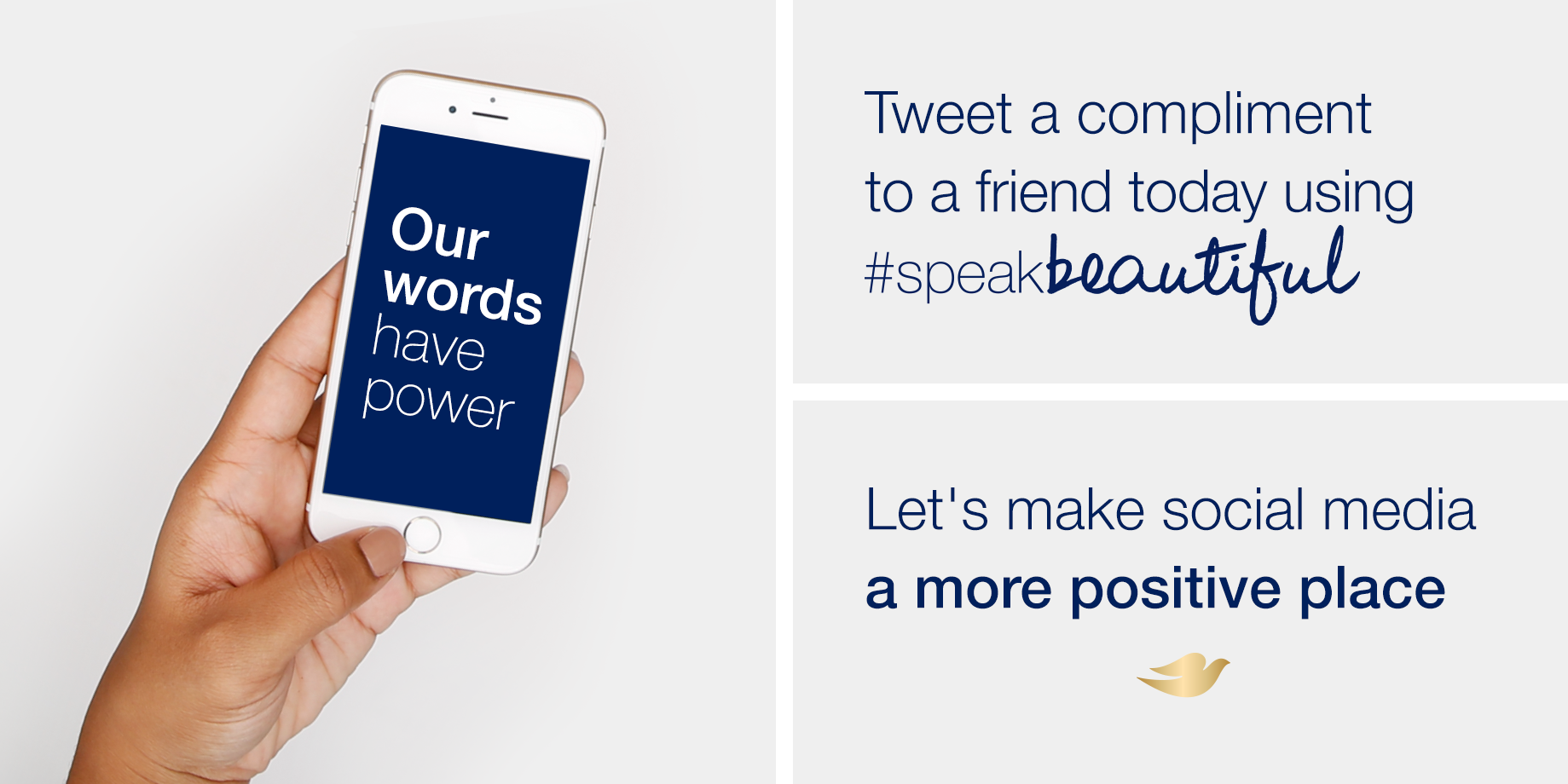 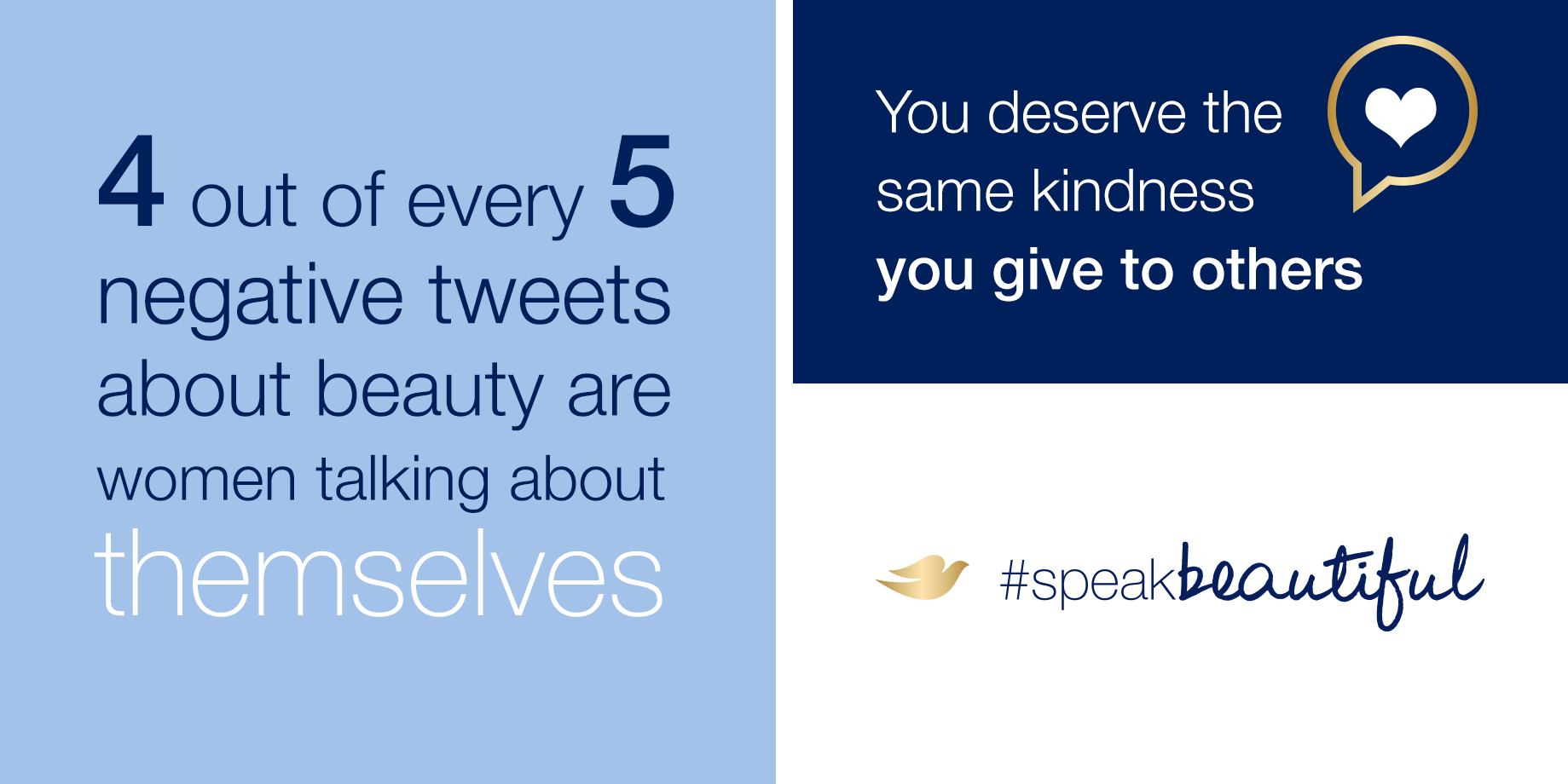