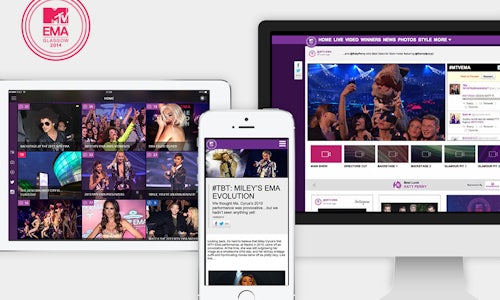 The MTV EMA is a one-of-a-kind annual event that celebrates music from around the globe, from international superstars to local-favorite artists—and gives fans around the world the power to choose award winners. The 2014 event, hosted by Nicki Minaj, marked the EMA's 20th anniversary and was broadcast live from Glasgow, Scotland. The show aired in more than 160 countries and territories. The event was supported with a wide-ranging digital and social campaign including 34 regional websites in 21 languages, iOS and Android apps localized in 11 languages, and a massive international social media presence including Facebook, Twitter, Instagram, Vine, and Google+. This multiplatform campaign was executed by a central internation digital team coordinating with local MTV teams around the globe, publishing/posting content seamlessly across time zones. Content was tailored to each regional site, including coverage of local artists and the ability to vote for one's local EMA category, as well as curated with each region's cultural sensitivities in mind. Content was also tailored by platform to play to the strengths of each and encourage users to consume content across all platforms—e.g., Facebook teaser videos with prompts to watch the full video on the site. The 2014 MTV EMA generated a tremendous volume of social media chatter around the globe, generating 389 million mentions across platforms over the course of the campaign.

Across our platforms, we offered a wide range of features over the course of the EMA campaign, including:

- Hashtag voting: For the first time, music fans around the world had the power to select one of their region's contenders in the unique Worldwide Act race, via hashtag voting for a 'wild card' local artist. Another first: Music lovers voted for the popular Biggest Fans category exclusively via hashtags, with their passion for rallying their fandom a great engagement driver. Plus, the EMA introduced brand-new category Best Song With a Message, also voted on exclusively by hashtag, with a real-time voting visualization featured on the 34 MTV EMA websites. This category recognized artists addressing social issues, and fostered meaningful social conversation. On the lighter side, fans voted via hashtag to determine what rapper Redfoo would wear under his kilt on the red carpet in Glasgow. Their choice was revealed on the live on-air red carpet show…nothing!

- User-generated site content: Giving fans a voice was a key theme of the 2014 MTV EMA campaign, as evidenced by the recurring #EMAFansHaveSpoken feature. The @MTVEMA Twitter account posed questions (e.g. 'Which artist owned 2014?') inviting followers to respond using #EMAFansHaveSpoken; then selected tweets were embedded into themed articles. Some fans received tweets from @MTVEMA informing them they were featured on the site—judging from their responses, they were thrilled to be part of the conversation! This feature also contributed to the synergy of the websites and social media accounts, leveraging social conversation to enhance our site content offering.

- Enhanced voting in-app: We simplified fans' lives by enabling them to set vote reminders and re-cast their entire vote history with one tap.

On the night of the show, aired live on local MTV channels around the world and streamed live on the local MTV EMA sites, fans across the globe participated in a digital/social experience that included:

- Live-tweeting the show, with a stream of @MTVEMA Twitter posts on the websites

- A Social Radar stream on the MTV EMA websites, visualizing the stream of chatter related to the event

- A backstage 'selfie booth' for celebs

- A red carpet 360 booth for celebs, with footage posted across platforms

- An #EMAselfie hashtag campaign, designed to make fans worldwide feel like a part of the experience by tagging themselves in photos. Awareness and participation were spurred by a how-to video featuring YouTube superstar ||Superwoman||.

The 2014 MTV EMA's mutiplatform campaign made fans all over the globe feel they were a vital part of it—from choosing the winners to getting a VIP backstage view.

The campaign was a massive success, with website page views up 63 percent and app downloads up 185% YoY. The night of show saw #EMA2014 trending #1 worldwide. The MTV EMA ranked as the #1 most social US show of the week with 13.6 million tweets the evening it aired, a whopping 656% increase YoY. Overall, the 2014 MTV EMA generated a record-breaking level of social conversation, with 389 million mentions across platforms (including hashtag votes for international 'wild card' nominees), up 572% YoY. 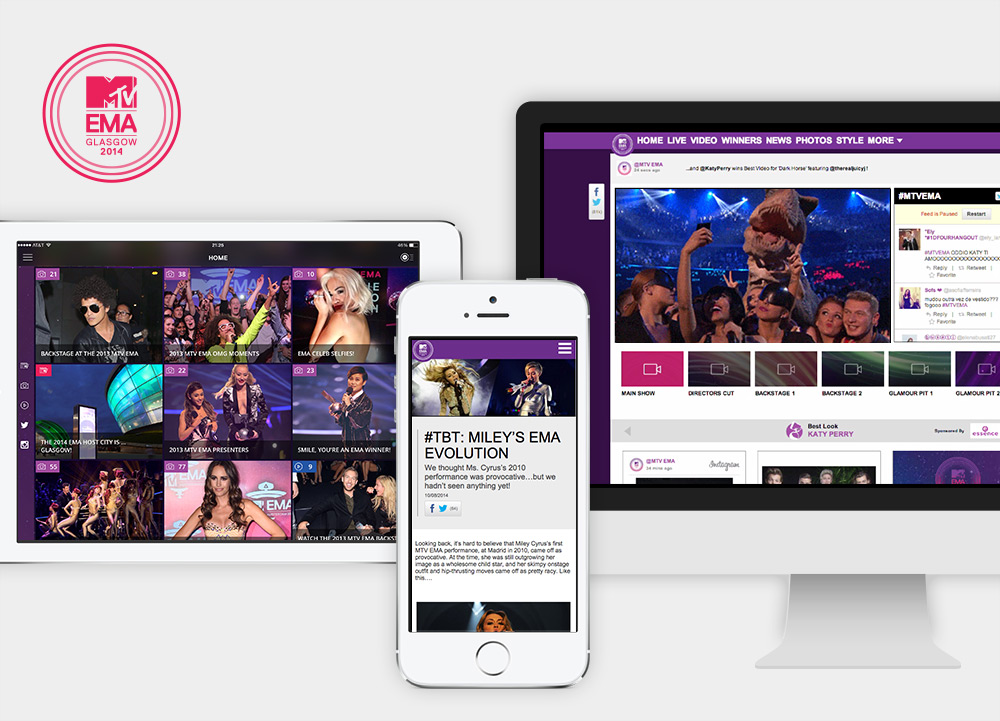