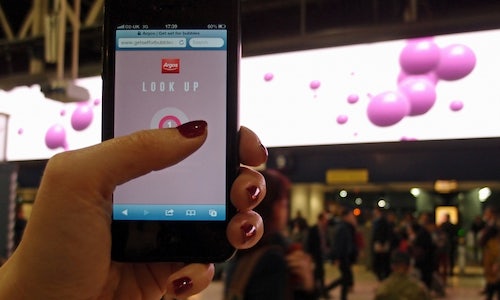 Argos: Get Set For Bubbles

As part of the Get Set Go Argos brand relaunch campaign, an interactive digital out of home 'bubbles' game was developed for the massive digital screens at the busy London train stations Waterloo and Euston.

Commuters at the locations connected to the on-screen action using their smartphones and were then able to pop Argos bubbles as they appeared and floated across screen, competing with other users to score the most points.

Those points entered players into an hourly prize draw to win gift vouchers or bundles of products from prestigious brands stocked at Argos such as Beats, Nikon, Samsung and Dualit.

The interactive game represented the shift in consumer behaviour towards mobile usage, with almost a third of Argos sales now being via those devices.

Hosting the game at London's busiest stations meant that we were able to raise brand awareness on a large scale. It showcased the retailer's digital transformation and innovation and caused users to consider Argos in a different light.

Get Set For Bubbles was a media first which was developed specifically to take advantage of '[email protected]', the largest single indoor screen in the UK.

It was a huge technical undertaking to connect a mobile URL on the user's handsets by proximity to the screens in the station, but one which was smoothly achieved, enabling the game to be easily accessed and enjoyed.

The game used a dynamic queuing system and real-time smartphone-to-screen connections which allowed it to become a multi-player experience in which numerous commuters could play against each other, competing for the highest score and the many spot prizes available.

The scale and visual appeal of it stopped busy commuters in their tracks as they made their way through the stations. Crowds of people played on their phones, and there was even an online version which allowed users who weren't in London to experience the bubbles excitement too.

The game was played by tens of thousands, and the fun was amplified on the Argos social media channels (audience of 1.5m) with prize updates and near-live photography from the stations to raise awareness and interest with a wider online audience.

In addition to the social activity, geo-targeted mobile banners were delivered to anyone going online via their smartphones in both stations during the game, and ground-staff were on-hand to drive further awareness and encourage people to pop some bubbles!

Overall, Get Set For Bubbles was a triumph as a result of the innovation involved and the effect it had on user's increased consideration of Argos as a truly digital retailer.

Speaking about Get Set For Bubbles, Carl Nield, Head of Brand Marketing at Argos, said: "Mobile channels present a huge opportunity and with the number of customers using mobile devices to shop with us continuing to grow, we wanted to create a fun and interactive way for them to engage with Argos in a convenient location. We are proud to be the first retailer to use the prestigious Motion screens in such an innovative way."

Chad Warner, digital creative director at CHI&Partners, added: "Bubbles is an ambitious technological project which, combined with the game's visually spectacular look and feel and the top brands Argos are giving away as prizes, represents the retailer's new direction and focus, offering a premium, cutting-edge experience for modern shoppers."