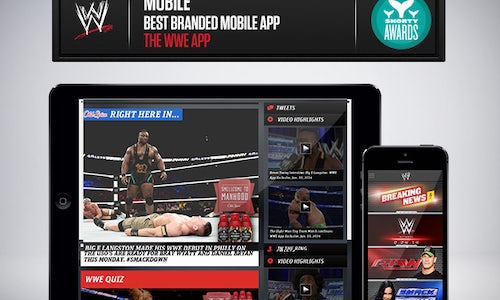 Available on Apple iOS and Android devices, the WWE App is the digital center of the WWE Universe, bringing our fans worldwide closer to WWE’s Superstars and Divas than ever before, from anywhere their digital device can access the Internet. The WWE App’s primary purpose is to provide users with an interactive companion platform that richly enhances the viewing experience during all of WWE’s television programming. Our fans’ votes within the WWE App help shape the live storylines unfolding on WWE Raw, WWE SmackDown and WWE Main Event. Also, the WWE App provides a portal to order and watch WWE pay-per-view events directly on fans’ mobile devices, gives our fans easy access to WWE Live Event ticket and merchandise purchases, and will become the anywhere, anyplace connection to the new WWE Network, coming February 24, 2014. INTRODUCTION: For years, wrestling fans have welcomed WWE into their homes via our weekly shows, including Monday Night Raw, Friday Night SmackDown and WWE Main Event, airing Wednesday nights. For those fans unable to attend a live show, the viewing experience has been just a passive way to consume the entertainment of our product. But WWE’s aggressive integration of social media into our shows provides a viewing experience unmatched by any other weekly episodic show. (Visit WWE App Portfolio website for examples of WWE App sections and layout.) In partnership with WWE Television Creative Writing and Production, WWE App voting is incorporated in every live WWE Raw episode as part of the second-screen experience, affecting storyline activity in the program. Depending on the vote topic, the WWE Universe’s responses can select the winners of awards, choose match participants or stipulations, or decide which characters get hired or fired. WWE’s Digital Content team creates the second-screen content that accompanies the live programming, which features dynamic illustrated factoids, fan tweets, polling and exclusive backstage photography from the event. Due to the ever-changing script behind our live programming, the Digital Content team often has just hours to create the content seen on the second-screen presentation, not weeks like most network scripted programs. The Second Screen also provides live video Superstar interviews and match continuations during commercial breaks in the on-air program, providing a unique real-time viewing experience unrivaled in the industry’s current crop of second-screen apps. STATISTICS: * The WWE App is available on every major mobile device, including iPhone, iPad and Android phones and tablets. * The WWE App has been downloaded more than 9.1 million times, including more than 4,000,000 international downloads from users in 220 countries. * WWE App averages 2,000,000 active poll votes monthly during our live programming, with 1.9 million unique users, * More than 155 million page views and 18 million video streams have been watched in the WWE App's second-screen. * More than 60 million videos views have been watched through the WWE App since launch in July 2012. STORYTELLING THROUGH THE WWE APP WWE App second-screen content, from exclusive videos to audience voting, is designed to advance and enhance the multiple storylines of WWE’s television programs. * Audience votes in various interactive polls in real-time to determine under which type match stipulation two Superstars would compete, or which Superstar a competitor must face – right on live TV * During commercial breaks, WWE App users watch exclusive, live video in which competitors are assigned matches in-program that take place immediately upon return to programming * During commercial breaks, viewers can watch a match currently in progress instead of missing the action until the broadcast resumes * WWE App users are privy to exclusive, live video involving character interaction and the progression of storyline, including video that picks up and continues just as television programming goes off the air * The WWE App bridges the gap between television and social media by showcasing storyline-related tweets sent between Superstars Specific examples of the WWE App's multi-platform storytelling: * Audience voted in interactive polls as the sole decision-makers to determine the winner in each category of WWE’s annual, live, televised awards show, The Slammy Awards. * Audience voted in interactive polls to determine which opponent the WWE Champion would compete against that same evening. * WWE App users watched exclusive, live video of a WWE character quitting the company, within storyline, after her loss on live TV. * A WWE talent was asked to react to negative fan sentiment garnered exclusively through a live poll on the WWE App. Thanks to the WWE App second-screen experience, and its groundbreaking interactivity and streaming video delivery, our fans are no longer passive viewers of our product; they’re also the co-stars and storytellers of the action inside the ring. The WWE App's second-screen companion includes the most-vibrant and captivating infographics for a TV companion app online today. The WWE second-screen team creates these graphics to entertain and engage the WWE Universe with often less than four hours notice of WWE's often-shifting live programming script and storyline direction -- unlike most productions that have weeks to craft their second-screen companion content before airing. (Visit WWE App Portfolio website for second-screen examples) THE 2013 SLAMMY AWARDS WWE fans are always encouraged to make their voices heard. As a result, WWE App users have the ability to cast votes to determine the actual content of programming in real time, including which performers compete against one another and what type of match they compete in. In December 2013, the WWE App empowered fans to be the sole decision-makers in our annual, live televised awards ceremony (“The Slammy Awards") by encouraging users to cast real-time votes to determine the winner in each and every category. This year, more than 1.64 million votes were cast inside the WWE App during the three-hour program, with more than one million unique users engaging on the platform during the show. ADDITIONAL LINKS & MORE INFO WWE App Portfolio site for Shorty Awards WWE App on iTunes WWE App on Google Play

WWE, a publicly traded company (NYSE: WWE), is an integrated media organization and recognized leader in global entertainment. The company consists of a portfolio of businesses that create and deliver original content 52 weeks a year to a global audience. WWE is committed to family friendly entertainment on its television programming, pay-per-view, digital media and publishing platforms. WWE programming is broadcast in more than 150 countries and 30 languages and reaches more than 650 million homes worldwide. The company is headquartered in Stamford, Conn., with offices in New York, Los Angeles, London, Miami, Mumbai, Shanghai, Singapore, Munich and Tokyo. 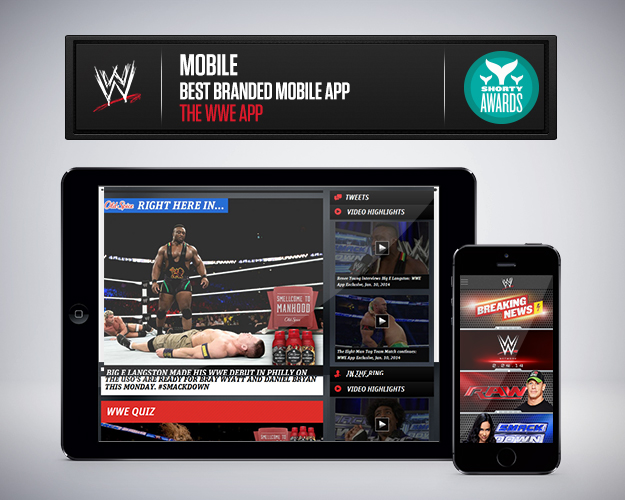