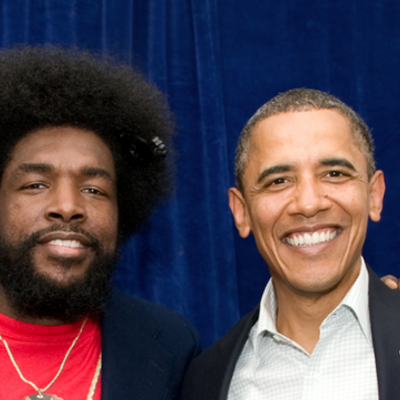 From Wikipedia: “Ahmir Khalib Thompson, known professionally as ?uestlove or Questlove, is an American drummer, DJ, music journalist and record producer. He is best known as the drummer and joint frontman for the Grammy Award-winning band The Roots, who will serve as the in-house band for The Tonight Show Starring Jimmy Fallon starting February 17, 2014." From Amazon.com’s Mo’ Meta Blues book description: “Ahmir ‘Questlove’ Thompson is many things: virtuoso drummer, producer, arranger, Late Night with Jimmy Fallon bandleader, DJ, composer, and tireless Tweeter. He is one of our most ubiquitous cultural tastemakers, and in this, his first book, he reveals his own formative experiences--from growing up in 1970s West Philly as the son of a 1950s doo-wop singer, to finding his own way through the music world and ultimately co-founding and rising up with the Roots, a.k.a., the last hip hop band on Earth."