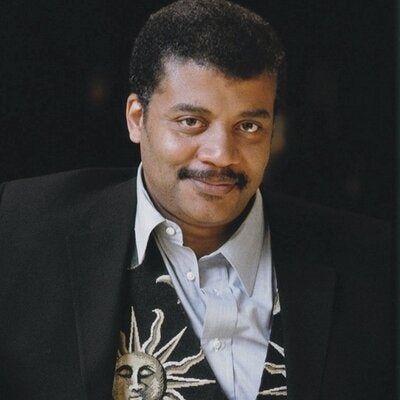 From Wikipedia: Neil deGrasse Tyson is an American astrophysicist, author, and science communicator. He is currently the Frederick P. Rose Director of the Hayden Planetarium at the Rose Center for Earth and Space and a research associate in the department of astrophysics at the American Museum of Natural History. From 2006 to 2011, he hosted the educational science television show NOVA ScienceNow on PBS and has been a frequent guest on The Daily Show, The Colbert Report, Real Time with Bill Maher, and Jeopardy. Tyson will be hosting Cosmos: A Space-Time Odyssey, a sequel to Carl Sagan's Cosmos: A Personal Voyage television series starting March 2014. As director of the Hayden Planetarium, Tyson bucked traditional thinking in order to keep Pluto from being referred to as the ninth planet in exhibits at the center. Tyson has explained that he wanted to look at commonalities between objects, grouping the terrestrial planets together, the gas giants together, and Pluto with like objects and to get away from simply counting the planets.