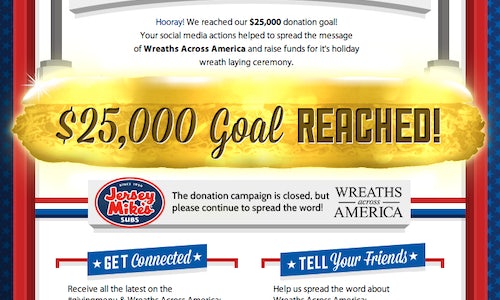 Each year Jersey Mike's, a sub shop raised on quality ingredients and a strong sense of community, donates funds towards the Wreaths Across America organization, which lays thousands of wreaths around the holidays on the graves of fallen soldiers in honor of their service. In the 3rd year of Jersey Mike's partnership with Wreaths Across Amercia, Jersey Mike's wanted a novel way to supplement their in-store efforts on their social media platforms. The Social Giving Menu provided a fresh way for fans to give back through social-media powered actions, with each action valuing a dollar for the cause. Other restaurants have popularized the Dollar Menu, like McDonald's and Burger King, and we wanted to give a new twist to this idea, and bring to you a dollar menu that lets you give back. Jersey Mike's set a $25,000 goal to raise specifically on social between October 1st and November 11th. In no time, we saw an overwhelming response by the Jersey Mike's fanbase who quickly started taking action at an unprecedented rate. We provided 6 ways for users to engage. You could tweet using the hashtag #givingmenu or share the Social Giving Menu on Facebook to help spread the word. You could follow Jersey Mike's on it's principle properties to stay up-to-date with the Wreaths Across America campaign. And our instagram option allowed you to upload a picture of what giving means to you using the universal hashtag. The campaign lived on a central Facebook Tab hub, where there was a real-time meter that monitored the social chatter numbers/donations raised. We also supplied custom created content to drive towards the initiative on Facebook, Twitter and Instagram. The material gave Jersey Mike's a great way to spur interest and awareness in the non-profit. During the campaign promotion, JM gained over 13,400 Facebook followers, hit their 100,000 FB fan milestone and received 3,500 new twitter followers. With great thanks to the loyal Jersey Mike's fans, we reached the $25,000 goal on November 4th, 6 days before the campaign end date! Past campaigns were not able to meet the donation goal, but this year, Jersey Mike's was able to blow it out of the water. Throughout the campaign, fan response was extremely appreciative and positive with comments like: "My son was KIA in Iraq and is buried in Section 60 at Arlington National Cemetery. It is an honor to receive a photo of a WAA wreath laid on his grave every December. Thank you to Jersey Mike's Subs for helping with this important event." "A Great Cause" "Love the Program" "... by sponsoring a Wreath with your donation, the message is LOUD and CLEAR .... You care, You remember, You honor, You respect and appreciate the freedom they fought to protect, while sacrificing any future life with family. and 'THE CHRISTMAS THEY WILL NEVER HAVE'. Thank you Jersey Mike's and all your loyal customers! Love you all..... Hugs! "@[email protected] Giving means giving of my time to veterans and their causes, especially Wreaths Across America! #GivingMenu" "Shared all over facebook! I have over 1,000 friends most are affiliated with military or causes for military!" 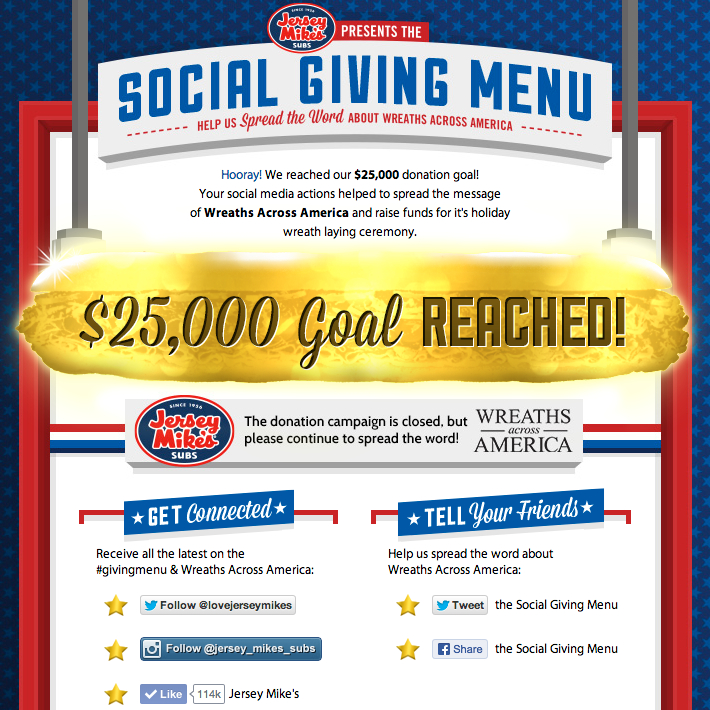