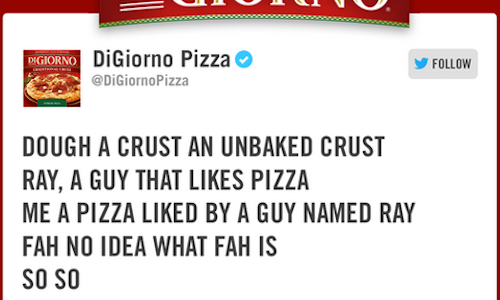 DiGiorno: The Sound of Music Live

The rapport and trust we've built with the DiGIorno brand team allowed us to take a much-anticipated TV event and tweet about it with the fun and witty voice and tone people have come to know from @DiGiornoPizza. Inspired pizza-themed tweets struck a chord with audiences when we decided there's really nothing in pop culture that Pizza can't be a part of, especially Carrie Underwood starring in a live production of The Sound of Music on NBC. Headlines declared DiGiorno an “online hero," praising the tweets as “tasty" and “amazing." And Pizza remains a huge Sound of Music fan.Two hours of live-tweeting 38 tweets garnered over 44 million social impressions for the week of 12/2-12/9. @DiGiornoPizza trended across the US and Canada in top cities like NYC, Chicago, Austin, and DC. We picked up over 4,000 new followers and earned over 65 million media impression as a result of 40+ publications writing about the event including CNN, LA Times Buzzfeed, Mashable, NPR and USA Today. Adweek named it the number one branded twitter play of 2013. And Ad Age listed it as one of ten ads from 2013 they loved, cracked them up, and blew their minds. 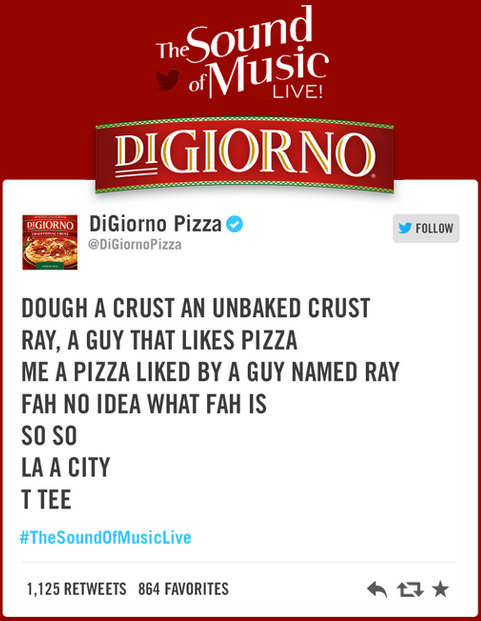