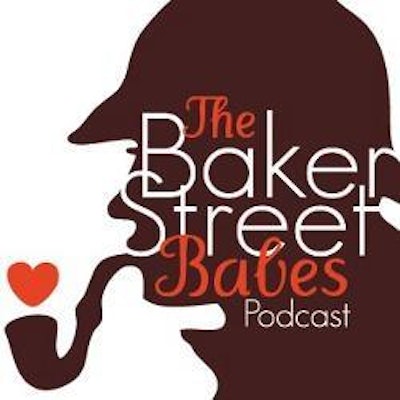 The Baker Street Babes are an all-female group of Sherlock Holmes fans who talk about everything from canon to Cumberbatch, Charles Augustus Milverton to Jude Law, and dancing men to Jeremy Brett. We love Sherlock Holmes and we love having well informed, but also quite fun discussions about it. We’re all young and we’re all females, but we’re all die hard Sherlockians/Holmesian. It’s a demographic within the Sherlock Holmes fandom that is new and growing and doesn’t yet have a voice. We hope to become that voice and we want to prove that we’re not just going to coo over Robert Downey Jr and Benedict Cumberbatch, as lovely as they are, but that we know the canon and want to have discussions about it as well. In addition to the podcast we have a popular tumblr blog and host a variety of fan events. Not only do we interact with our followers on a daily basis, we get questions from them for our interviews, host giveaways, and create fun and interactive social media events. We're big fans of the # and give everything a Holmesian twist. We livetweet Sherlock Holmes based shows and movies, as well as exclusive Q&As with cast and crew, conventions, and other events. Our SDCC Sherlock party boated hundreds of guests and was attended by Steven Moffat, Sue Vertue, Mark Gatiss, as well as the PBS and BBC Worldwide teams. We connected with them through social media, crowdsourcing the money for the party from our followers and fans, who got goodies in return. Most recently our hashtag #Applelock, as we reported on a Q&A with Sherlock cast and crew, trended in the UK and was adopted by the major media outlets.