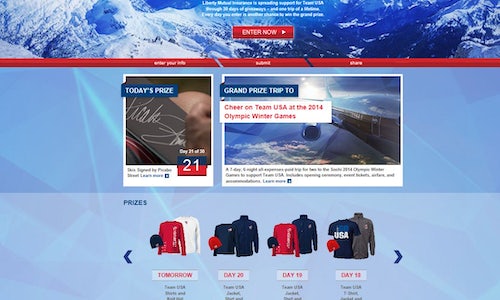 The pursuit of Olympic glory- whether you follow these moments from your TV or your Twitter handle, everyone shares a special connection to Olympic athletes. We cheer them on from our couches, we sacrifice entire afternoons and evenings for the chance to clap from the sidelines and will them on to greatness. At the end of the day, we believe our support makes a difference- so does Liberty Mutual. As an official partner of Team USA, Liberty Mutual is proud to support the individual athletes training to compete at the 2014 Olympic Winter Games. And to help further spread this support, Liberty’s “30 Days, 30 Ways" sweepstakes offered social media users a daily chance online and through Facebook to win those tangible things that help bring our support to life- from official Team USA jerseys and merchandise to grand-prize trips to Sochi to cheer on Team USA in-person. This was 30 days of Olympic giveaways, and 30 ways our fans, followers and consumers could show their support and win. With a fully integrated social marketing effort, our results were gold-medal worthy with nearly 200,000 entries and more than 850 million branded Liberty Mutual media impressions. In early 2013, Liberty Mutual Insurance announced its sponsorship of the U.S. Olympic and Paralympic Teams for the 2014 Olympic Winter Games in Sochi and the 2016 Olympic Games in Rio. With a little less than a year before the Olympic Winter Games in Sochi, Liberty Mutual wasted no time to create and activate a dynamic social media campaign that would dramatically increase our social engagements while aligning with our sponsorship and brand. To establish connection and build awareness of Liberty Mutual’s Team USA sponsorship at the 2014 Winter Olympic Games, gain early momentum in Olympics conversations and increase engagements with the brand, we launched the “30 days, 30 ways" sweepstakes on October 15, 2013. The sweepstakes was hosted on a Like-gated Facebook tab as well as a microsite. Users were required to provide basic information (name, email, phone number) to enter to win for daily giveaways including Team USA apparel and signed merchandise. Each daily entrant was entered into the grand prize drawing of a 7-day all-expense paid trip for two to Sochi, Russia for the 2014 Olympic Winter Games. The grand prize package included airfare, accommodation, ground transportation, meal and tax stipend as well as tickets to the Opening Ceremony, Ski Jumping, Ice Hockey, Speed Skating and Figure Skating. Daily prize packs included Team USA sweatshirts, jackets, shirts, official Team USA Hockey jerseys and signed skis and snowboards from two-time Olympic medalist Picabo Street and bronze medalist Chris Klug. To promote the sweepstakes, Liberty Mutual used Facebook promoted posts, right-hand-rail advertising and promotion via our agent Facebook pages. The program was also leveraged through other marketing channels including dedicated emails to customers, print newsletters, display advertising and website promotion. The results were gold-medal worthy. The sweepstakes far surpassed our internal goals and helped us hit 1 million Facebook likes during the campaign. Key results included: • More than 850 million branded Liberty Mutual media impressions • 334.5 million impressions delivered via social alone • 180,000 entries- four times higher than our original projection • 90,000 new Facebook Likes in less than 30 days • 40,000 entries via customer emails • 43,000 additional entries via bloggers and sweepstakes sites • Increased engagement levels including more than 840,000 Facebook engagements in October and 1.1 million Facebook engagements in November Through an integrated social and marketing approach, being early enough to the Olympic conversation and creating a simple activation with daily prizes to maximize entries, “30 Days, 30 Ways" was incredibly successful in growing Liberty Mutual’s social following while increasing overall brand engagement. 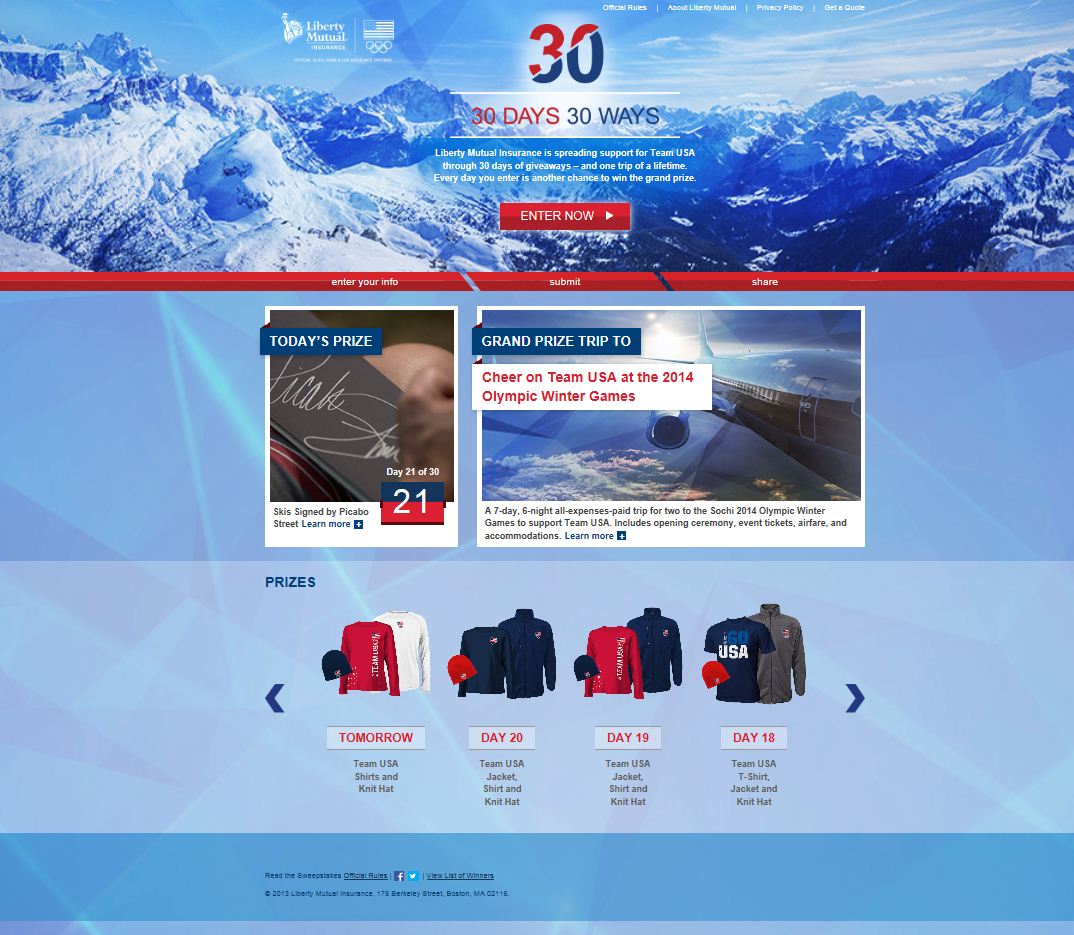