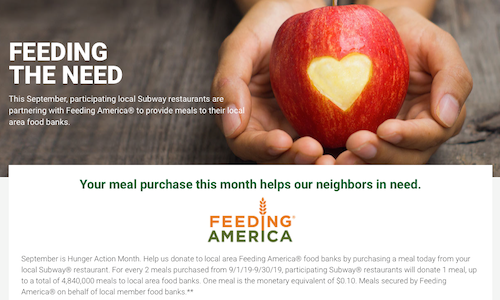 September is Hunger Action Month, an initiative established by Feeding America® in 2008 to advocate for the millions of families across the US who face hunger. In 2019, Subway® Restaurants teamed up with Feeding America in this continued effort, creating a community-fueled program to give back via a connected network of local food banks spanning the country.

For every two meals purchased at participating Subway restaurants during Hunger Action Month, one meal was donated to local area Feeding America food banks. During the promotion, entitled “Feeding the Need,” customers were able to help feed their neighbors simply by purchasing their favorite Subway meals. To raise awareness of and drive participation in this program, thereby donating as many meals as possible, we deployed meaningful, market-level messaging, partnering with a range of social influencers across 56 cities.

For Subway’s Hunger Action Month promotion, we pursued “acts,” not ads. We selected, vetted and activated 119 influencers with the mandate that each influencer be based and matched to our 56 markets. We guided and curated the content our tribe of influencers created to motivate their communities to help “feed the need” by taking advantage of Subway’s program to give back to local food banks. We amplified this content by promoting influencer social posts across Facebook and Instagram, as well as repurposing their content in digital banner ads targeted to influencers’ respective locations. This promotion resonated with customers due to its hyper-local focus, which by design kept donations local, and featured members of the community in social and digital ads.

Rather than partner with a handful of nationally known celebrities a world away from the communities we were affecting, in each of our participating Subway markets, we selected influencers whose voices are representative of the area and who could uniquely speak to and motivate their audiences, generating a diverse tapestry of hunger awareness across the country, which was then converted into action through meal donation.

In the best interests of the brand, a rigorous vetting process was put in place to select who to work with to build our tribe of over 100 influencers. Evaluation included location and audience data, follower count and engagement analysis, authenticity of audience, brand safety/suitability/likeability, historical performance and a legal background check for each influencer.

Across all participating markets, we were able to donate 4,840,000 meals to local Feeding America food banks as part of Hunger Action Month. Each market had an individual donation goal based on its size, ranging from 10,000 to 300,000 meals, to hit the collective 4.8MM goal, which was achieved due to social seeding and social sharing, igniting community participation.

Influencer efforts supporting this initiative generated 58MM impressions, with an engagement rate more than 2x above benchmark. In markets where a Millward Brown study was conducted, respondents exposed to influencer creative saw between a 5% and 12% lift in ad recall.

The wide range of localized influencers leveraged in this Feeding America partnership — including a former soccer star in Houston who volunteers with the East Texas Food Bank and a micro momfluencer in Cedar Rapids who opened up about experiencing food insecurity herself —  allowed us to act and activate authentically, generating awareness not only about Subway’s commitment to give back to local communities, but about hunger across America. 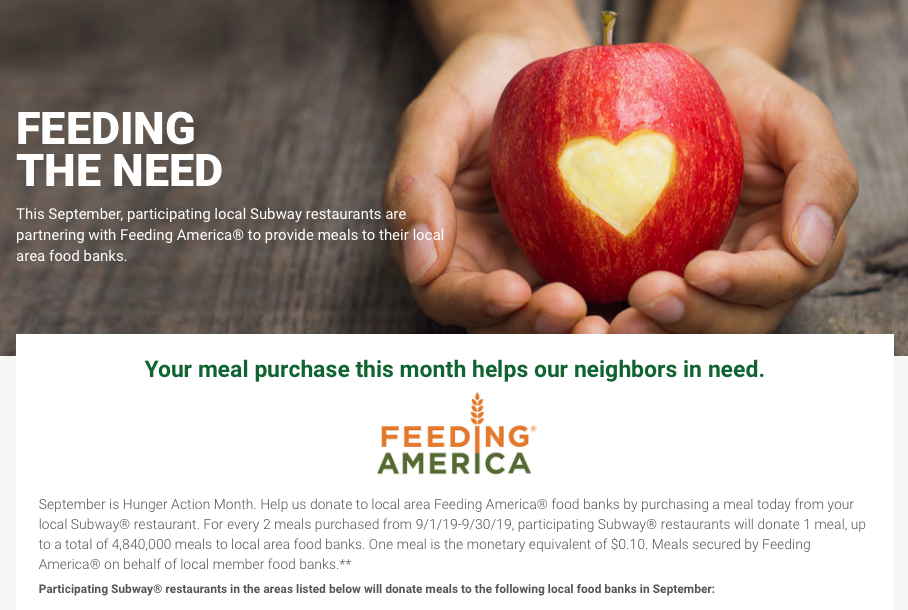 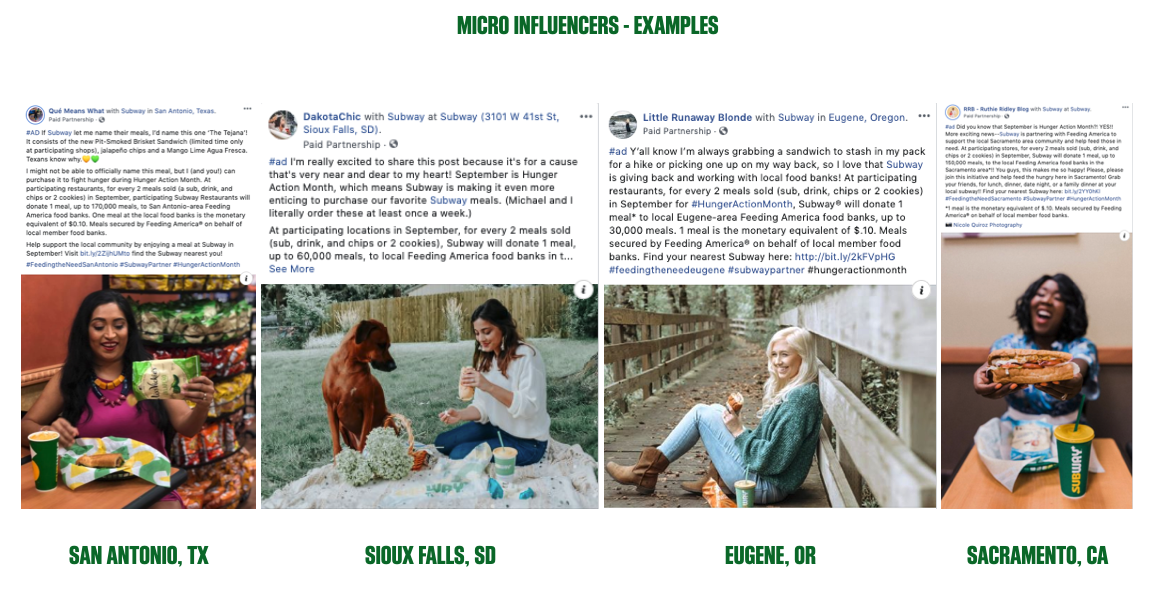 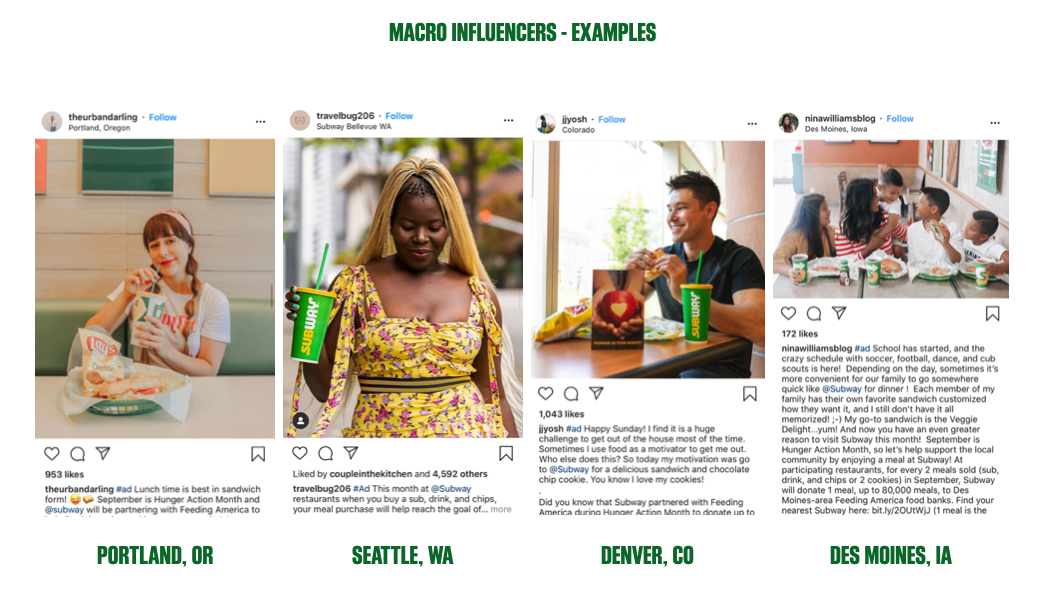 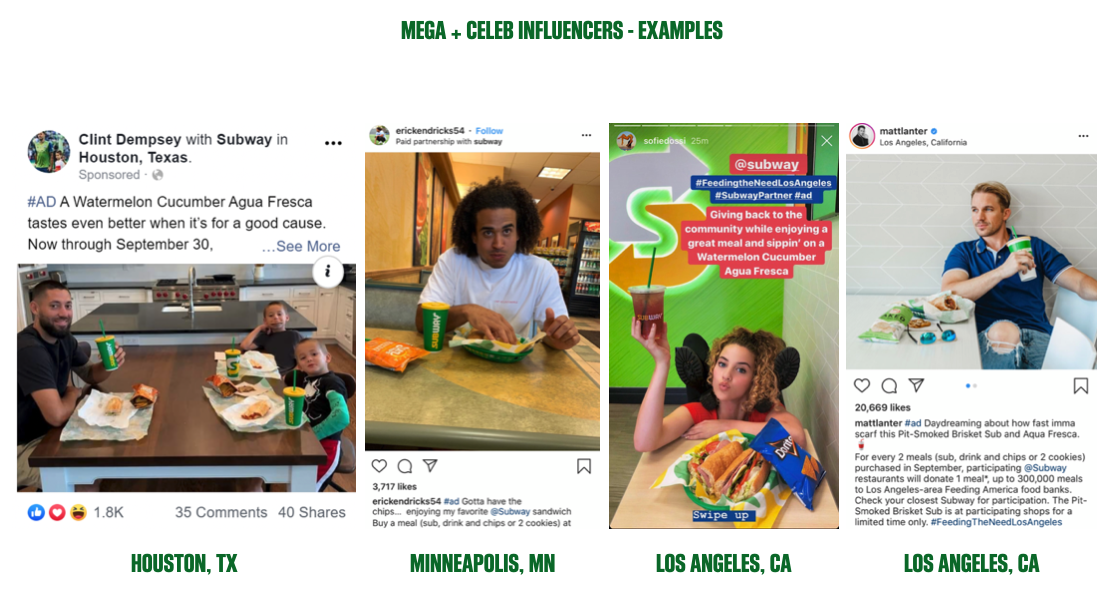 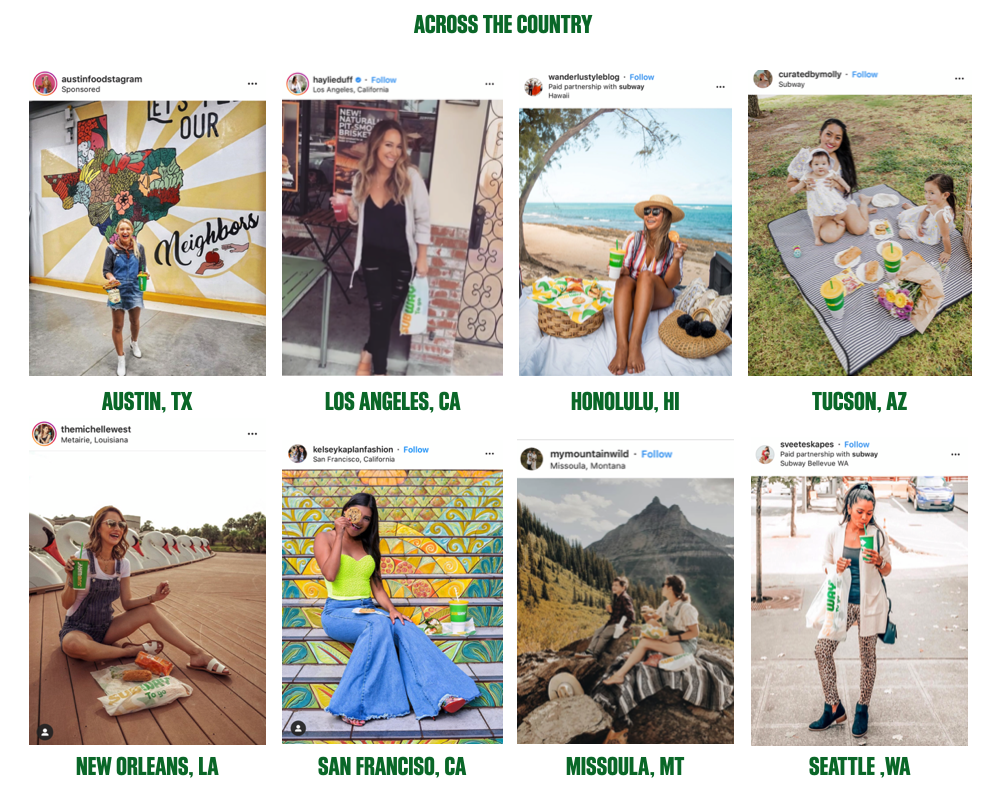 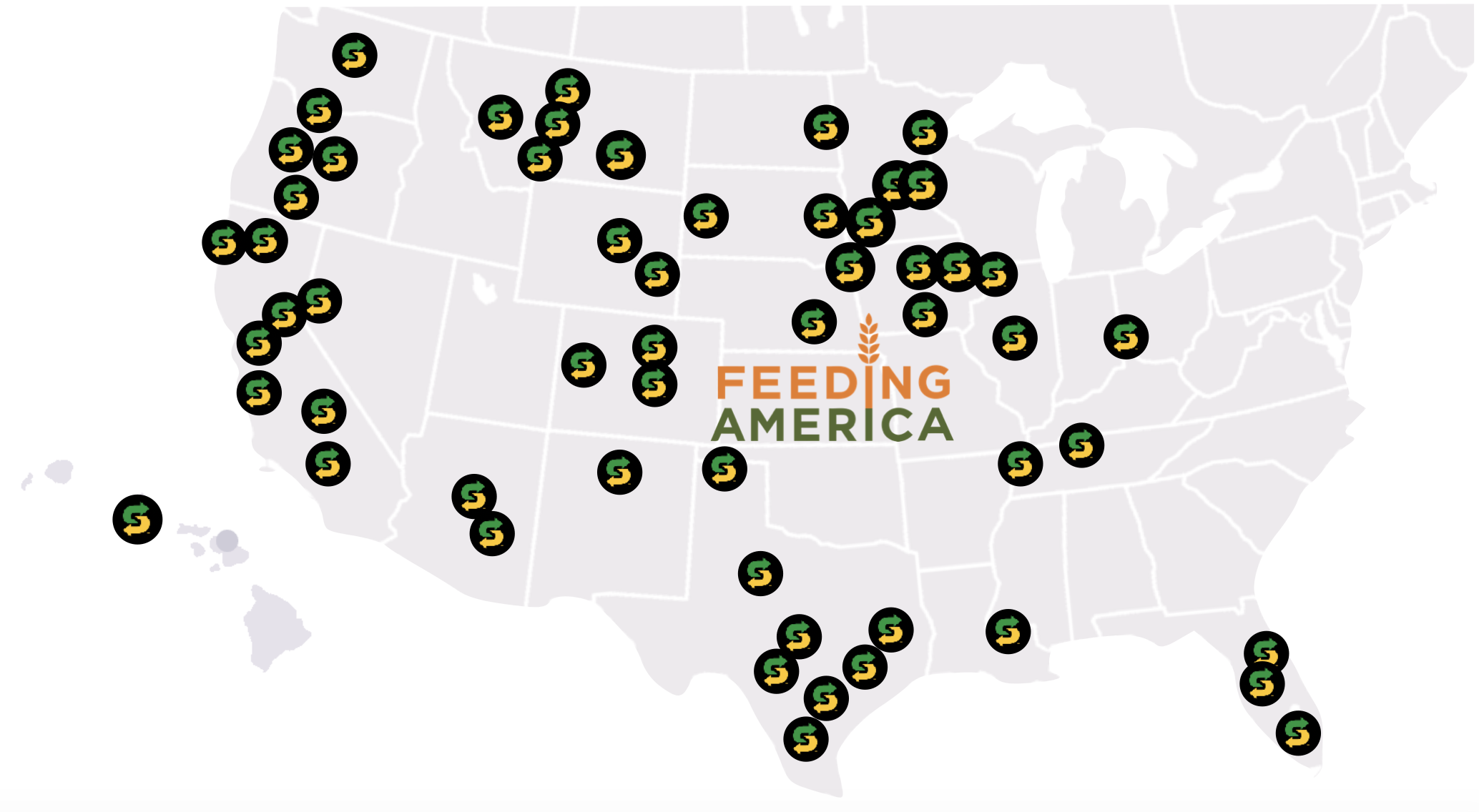 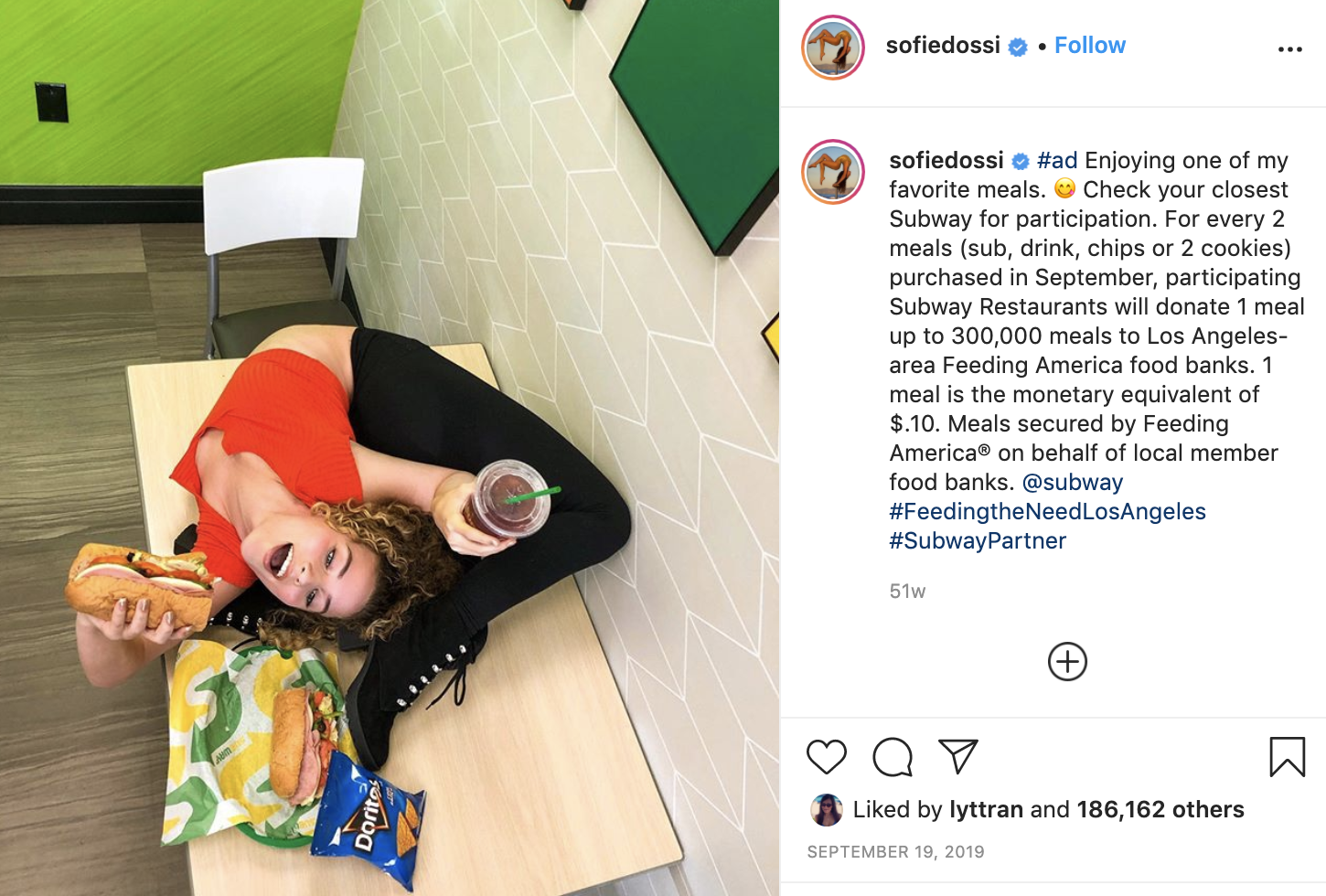 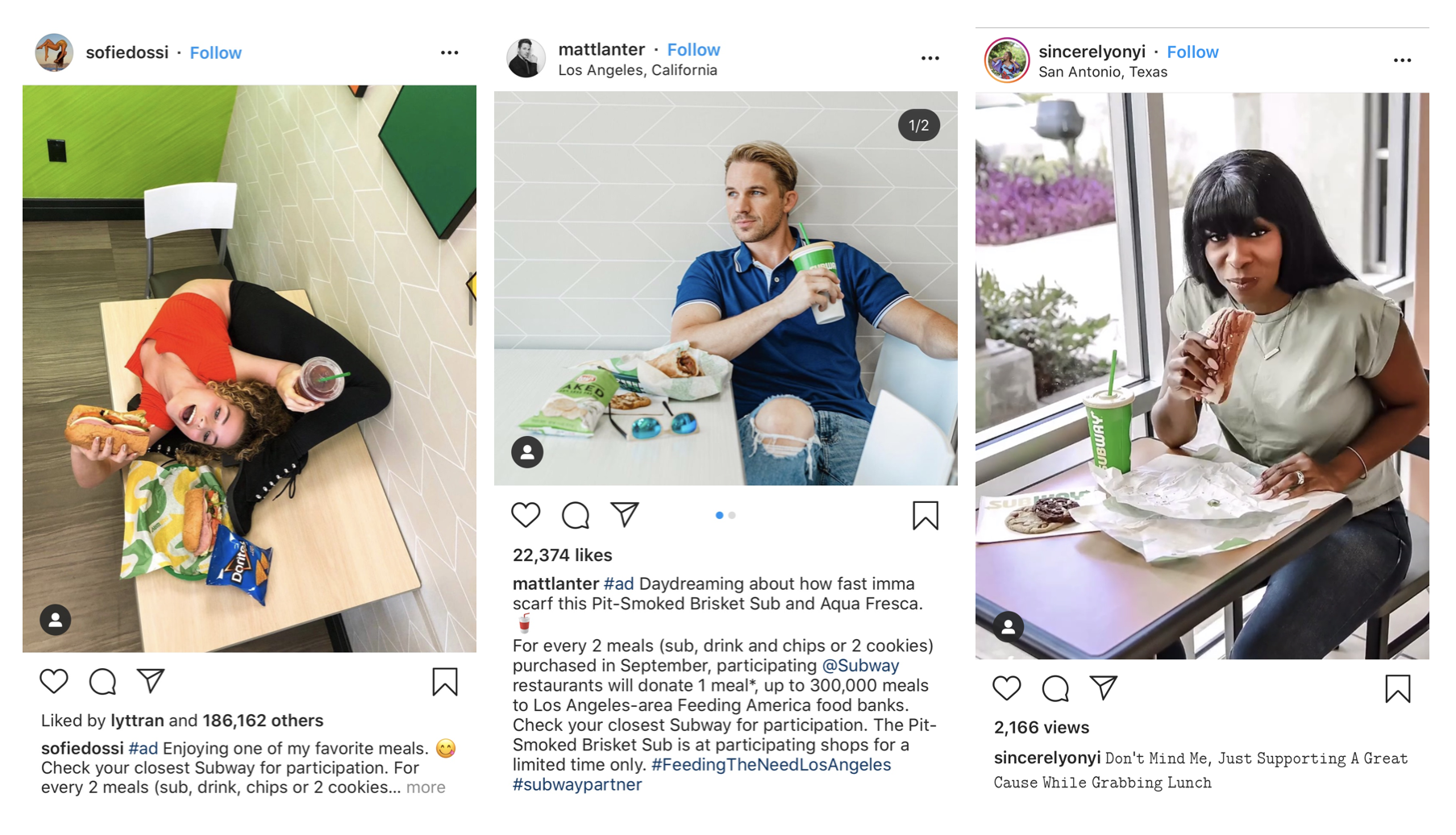