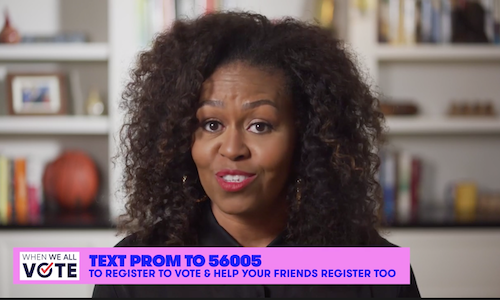 In January 2020, MTV partnered with Michelle Obama’s nonpartisan nonprofit, When We All Vote, to launch the 2020 Prom Challenge– a new program to celebrate and recognize 20 high schools across the country integrating voter registration into their schools in the most creative and impactful ways. The goal of this program was to encourage young people, particularly in under-resourced areas, to engage in the civic process and think outside the box about how voting could be embedded into the existing milestones in their lives - from 18th birthdays to proms to graduations. In this way, we met first-time voters where they are, and made voting fun, simple, and social in the process.

While we had originally planned on surprising the students by throwing one MTV-style mega prom for one of our winning schools, due to the outbreak of COVID-19 leading to the cancellations of proms across the country, we were forced to celebrate the Prom Challenge winners in a new way. We did this by working together to host the first-ever MTV Prom-athon – a virtual celebration for the Class of 2020 with a special focus on commemorating another important milestone for young people this year: registering and voting for the first-time in the November election. By shining a light on the work of the 2020 Prom Challenge winners to register voters at their schools and in their communities, we hoped to encourage other young people to register to vote too.

MTV’s 2020 strategy is all about reaching first-time voters, in particular 18 year olds. To change culture, we wanted to find ways to integrate voting into the rites of passage they look forward to every year. Prom is one of the biggest milestones in a high schooler’s life, so why not also make registering to vote another key moment?

We launched the 2020 Prom Challenge in February with an open call to all high schools to participate. In addition to tapping into When We All Vote’s expansive network as part of their My School Votes program, we worked together to determine other ways to reach students with this opportunity. To help create buzz in the early weeks that the application was open, When We All Vote engaged co-chair and founder, Former First Lady Michelle Obama, and asked her to post her own prom photo on Instagram and encourage her friends and followers to do the same. Thanks in part to this added spotlight, we were able to garner 149 quality applications from around the country.

We then worked collaboratively together with When We All Vote to develop an evaluation rubric to help us narrow our application pool. We focused our attention on schools with the highest racial and socio-economic diversity - looking closely at schools with high rates of students on free and reduced-price lunch. The 20 winning schools are in 11 states and Washington, D.C., and 16 of them (80%) have over 70% of their student bodies receiving free and reduced-price lunches.

In May 2020, right as COVID-19 started to lower the spirits of high school seniors everywhere, MTV and When We All Vote gave our winners an event to remember. We asked the students to join us on a Zoom call to discuss their application, whereby we announced that they had won the Challenge and we surprised them with appearances from TODAY Show correspondent and former first daughter, Jenna Bush Hager, and When We All Vote Co-Chair Michelle Obama. Mrs. Obama congratulated them on their wins, and encouraged them to keep up their amazing work by getting everyone they know to vote this November. In this announcement, a piece of which aired the next day in the third hour of the TODAY Show, Mrs. Obama also announced that MTV and When We All Vote would be throwing them a virtual Prom-Athon.

All applicants of the 2020 Prom Challenge were celebrated at the Prom-athon through interstitials that aired both on linear, and through a virtual celebration on MTV’s Youtube channel that evening. Interstitials included short interviews with student winners, and a congratulatory spot on behalf of all winning schools. The Prom-athon was a fun, music-filled experience with exclusive performances from Chloe x Halle, DJ Pauly D, and Kyle and celebrity appearances from DJ Khaled, Julianne Hough, Janelle Monae, and  b

Over the course of the campaign there were 193K social engagements, over 4.1M impressions, and over 1.45M cross-platform views. The Prom Challenge website yielded 9,402 pageviews, and 40 celebrities shared the Prom Challenge on social, including Mrs. Obama, Kerry Washington, Tom Hanks and Shonda Rhimes. Together with When We All Vote, we also built a bi-partisan Honorary Chaperone Committee, which consisted of 4 governors, 6 mayors, and 8 school superintendents who lifted up the Prom on social and encouraged their constituents to tune in.

The Prom-athon livestream had 40.8k total live views, ranking #10 for all MTV Youtube livestreams this year, and #2 for average view duration compared to other Friday music video blocks.

Through the course of the program (January to May), the Prom Challenge received over 110 press hits from outlets including the New York Times, ESSENCE, CNN, Entertainment Tonight, ABC News Live, and TODAY.

We are incredibly proud of the reach this program achieved, and the students who worked so hard to engage their communities in voting. This program would not have been possible without the unique partnership we forged with When We All Vote, whose work to build our website, voter registration hub, and high school network helped ensure that this opportunity reached the students who needed it most. 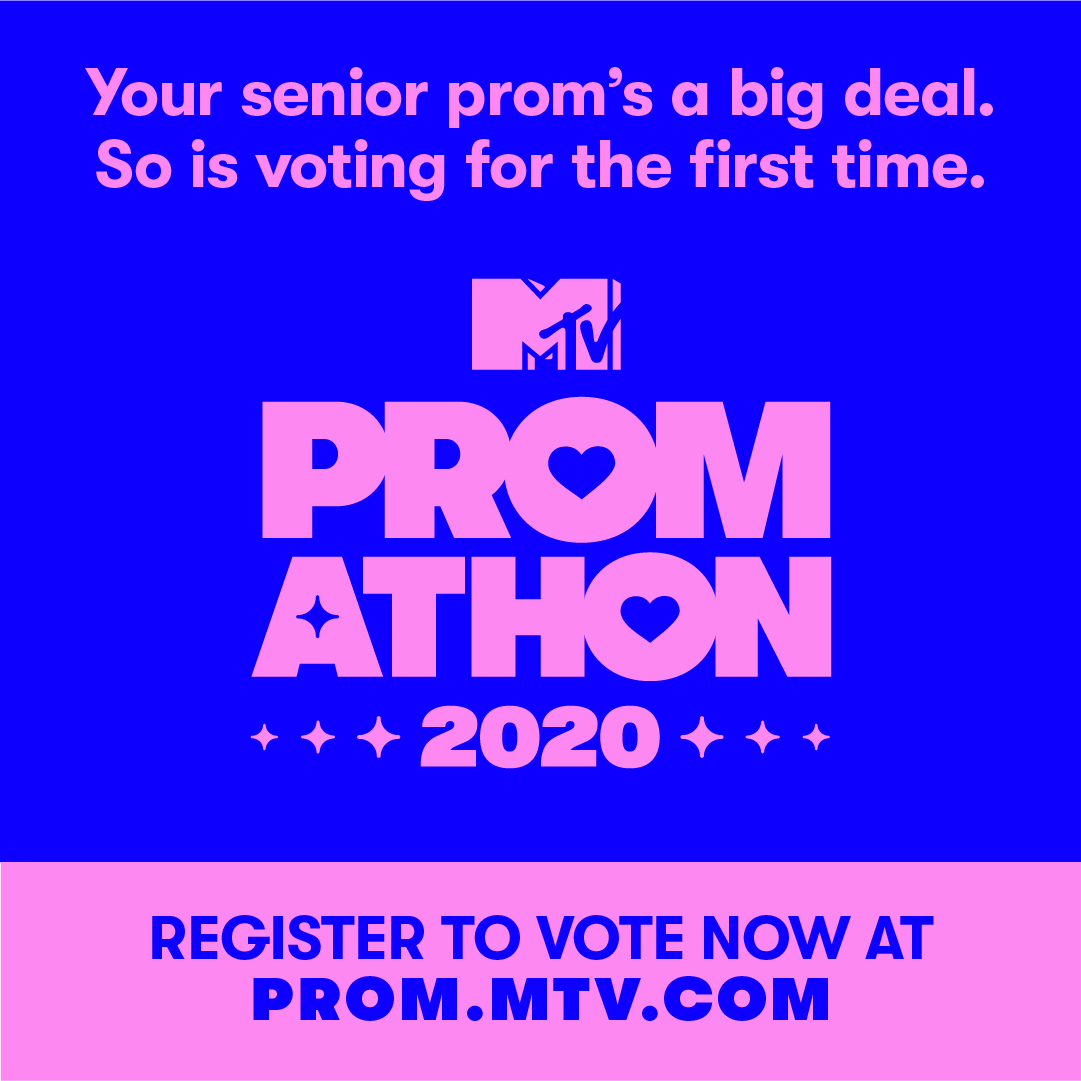 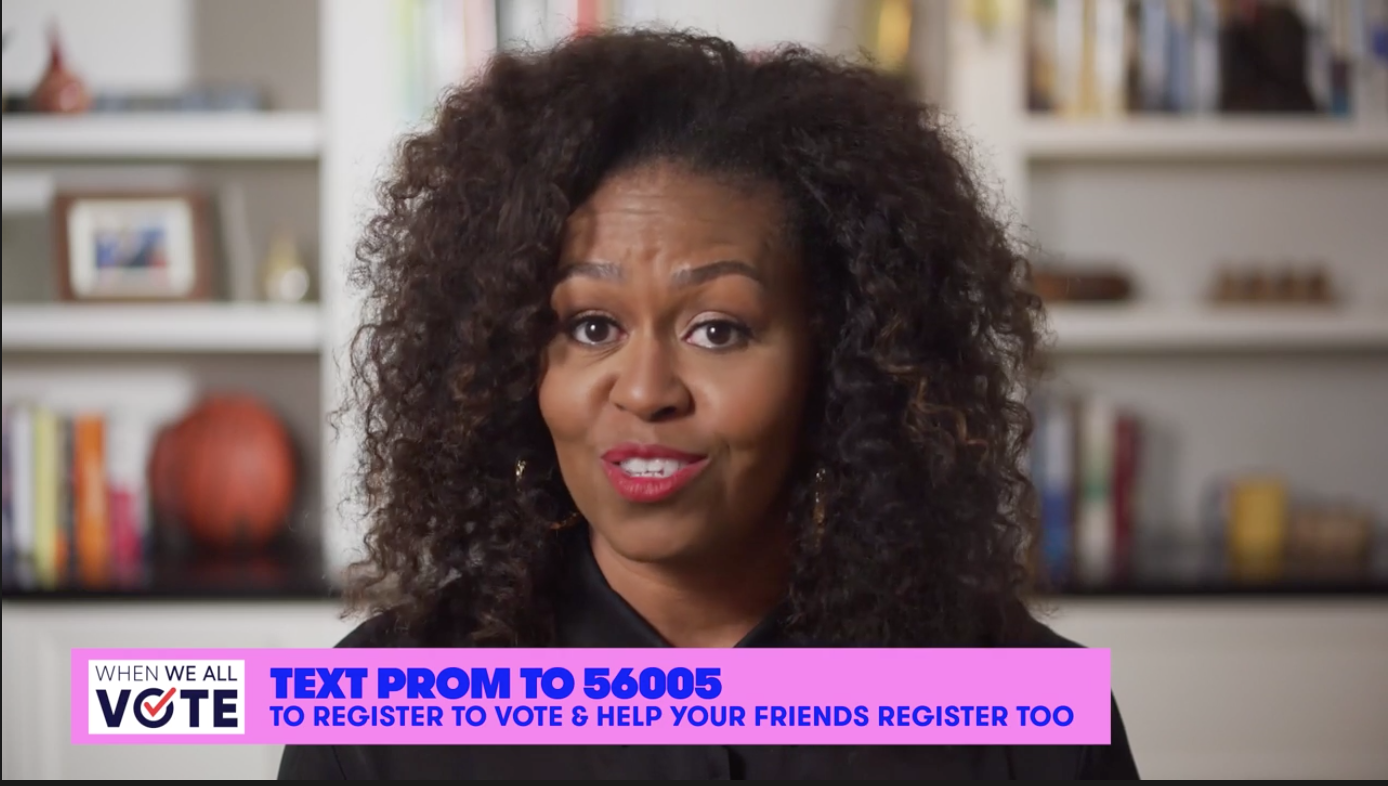 ViacomCBS and When We All Vote