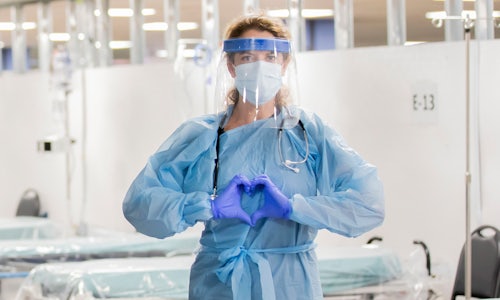 The objective was to create a nationwide platform to thank the medical staff on the frontlines of COVID-19 at Vanderbilt University Medical Center (VUMC) in Nashville, Tennessee through the power of music and words of encouragement. Psychiatrists at Mount Sinai Hospital in New York City predicted between 25%-40% of frontline healthcare workers and first responders in the United States may suffer from post-traumatic stress disorder as a result of their involvement in the outbreak. Due to restrictions around social gatherings and physical proximity, coping mechanisms were largely unavailable for frontline workers. The goal was to build a platform that allowed individuals nationwide to connect, share, and participate by sending thanks to VUMC, as well as healthcare workers in their life, for their endless work and dedication during the pandemic.

Nashville’s music and creative community was looking for a way to thank local doctors and nurses amid COVID-19 and spread the message of hope through the power of music to healthcare workers nationwide.

Gratitunes was created as a consumer-generated platform where individuals around the country could visit a custom-built microsite, Gratitunes.com, to dedicate a song by adding it to a custom Spotify playlist, and send a message of gratitude to frontline healthcare workers at Vanderbilt University Medical Center or a medical professional in their life.

The campaign launched on March 30th, 2020, National Doctors’ Day, and quickly grew into an Instagram aggregate with 30 consecutive days of live performances from over 80 artists and participants nationwide.

The program kicked-off with a performance and the first dedicated Gratitune from country-music superstar Brad Paisley on his personal Instagram account of over 1.8 million fans and followers, which garnered 129,000 views and over 600 comments. The ‘Gratitune’ thanked VUMC staff, healthcare workers across the country, and encouraged fans and followers to share their own Gratitune on Instagram using hashtags #Gratitunes and #VUMCHeroes. The program utilized these unique hashtags to allow interested viewers to browse Instagram posts for the campaign without disruption. All social media posts using the hashtags were pulled into the microsite for healthcare workers to see all the notes of support at one destination.

The Spotify playlist that housed all song dedications from the microsite was streamed to VUMC COVID-19 Assessment Sites and the Hospital to help lessen stress and anxiety, and lift spirits for medical staff and patients.

With Instagram’s more than 1 billion monthly active users, and over half using the platform every day, it is one of the most popular social networks worldwide. Its ability to generate 58 times more engagement per follower than Facebook made it was the best tool for artists, influencers and individuals to participate in the Gratitunes campaign.

As an extension of the 30 days of Gratitunes, VUMC partnered with two-time Grammy winning artist Lauren Daigle and Musicians on Call, a nonprofit bringing live and recorded music to the bedsides of patients in healthcare facilities, for a six-song concert for doctors, caregivers, first responders, and patients at Monroe Carell Jr. Children’s Hospital at Vanderbilt. The performance was distributed to 19 pediatric hospitals and broadcasted throughout their facilities reaching over 1,200 patients, families, and caregivers. The performance was also posted on Daigle’s personal Instagram page with over 2 million followers garnering 228,812 views.

Throughout the month-long campaign, more than 80 musicians across multiple genres supported the campaign by sharing a personal Gratitune on their Instagram page, which was pulled into the custom microsite, and encouraged their fans and followers to do the same. Artist and influencer posts had a combined following of 26 million and artist performance content was viewed over 16 million times across all social platforms- Instagram, Facebook and Twitter.

Thirty music speakers and 14 iPads were donated to COVID-19 VUMC Assessment Sites and the Hospital to stream the Gratitunes Spotify playlist throughout the day. To date, the playlist has over 5,000 songs added by individuals around the country for healthcare workers to listen to lessen stress and anxiety. 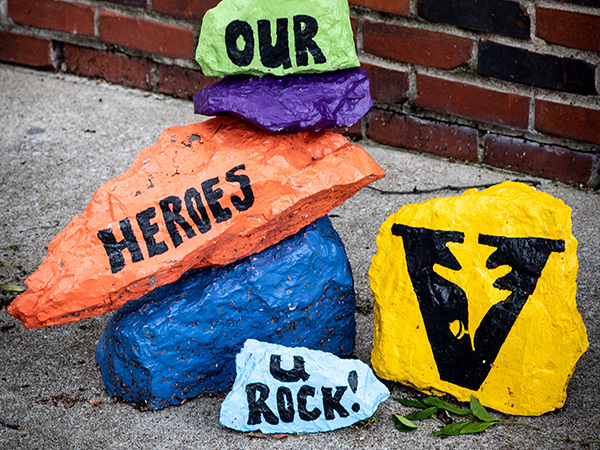 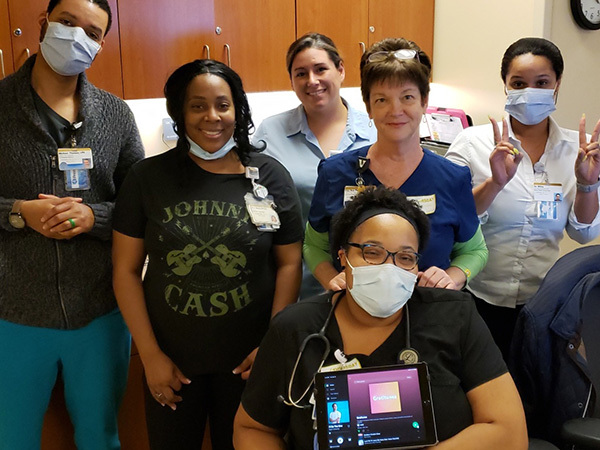 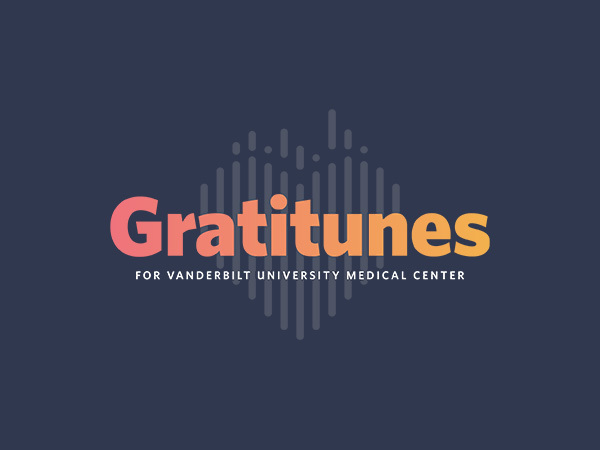 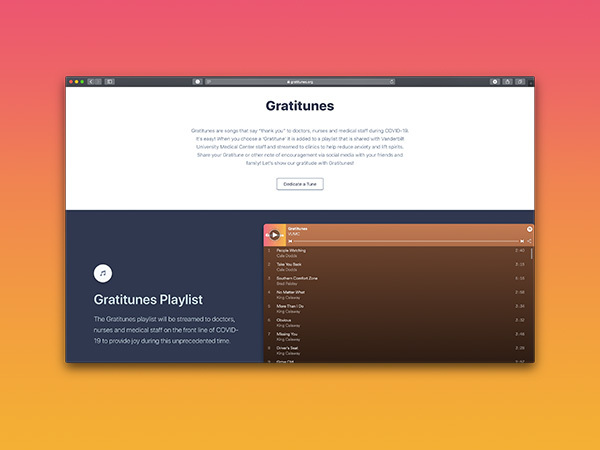 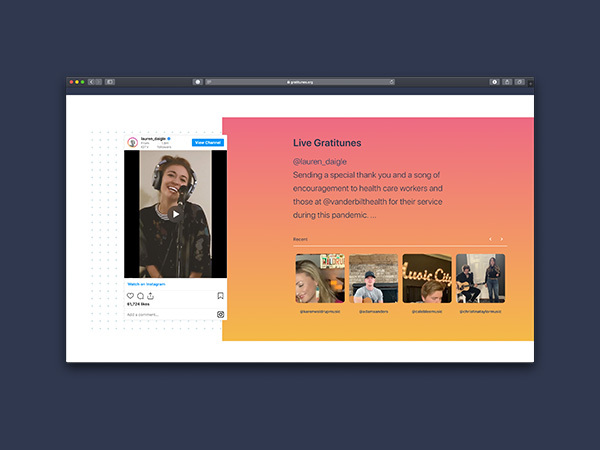 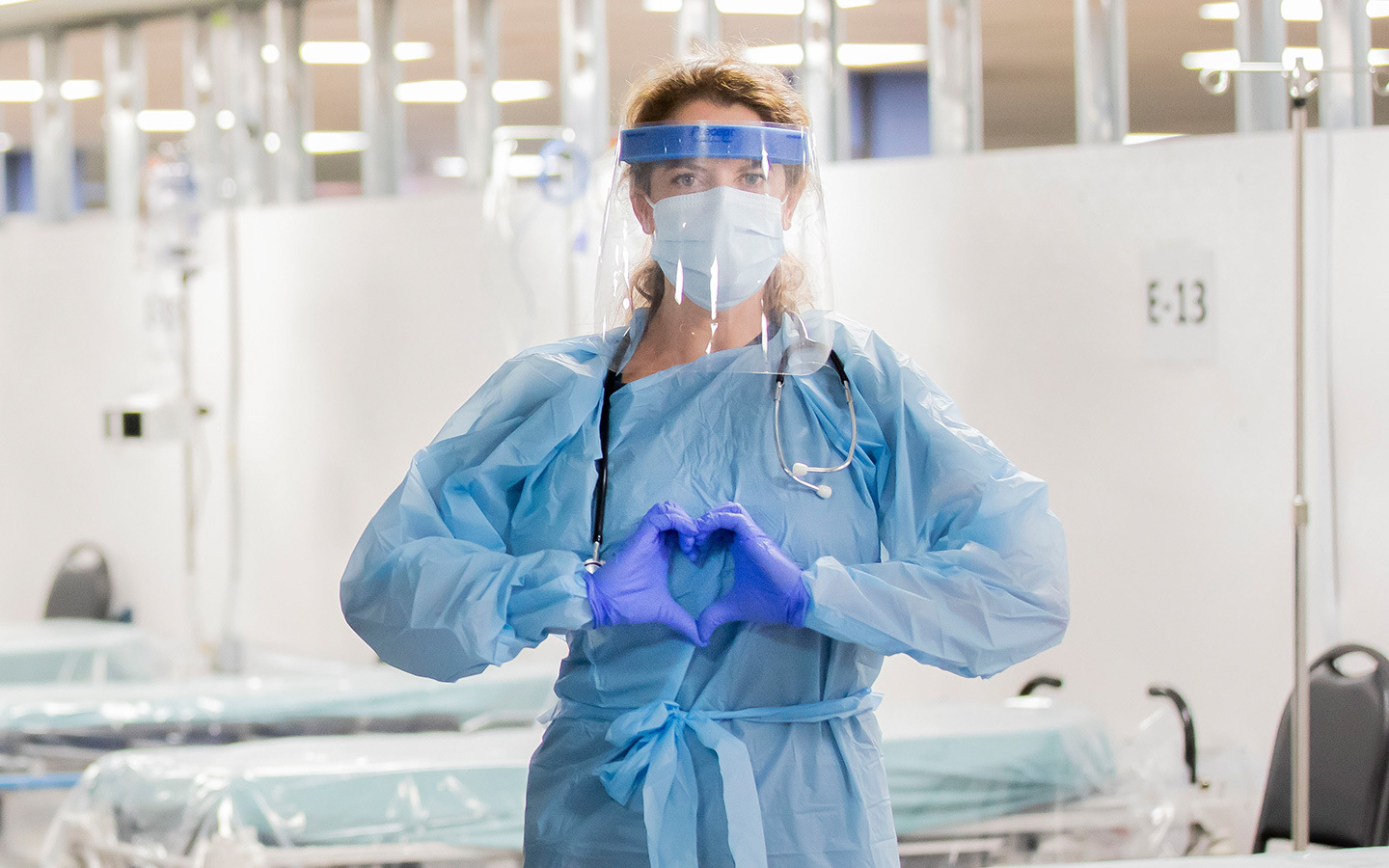