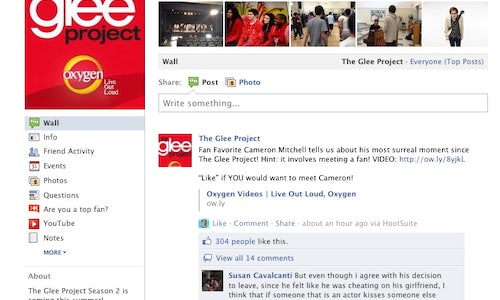 With nearly half a million fans and counting, The Glee Project Facebook page (http://www.facebook.com/thegleeproject) is a hub of conversation that connects Oxygen's target audience of social media obsessed young women with a plethora of digital content (photo galleries, bonus footage, blogs, etc.), custom tabs, apps and multi-platform extensions that build upon Oxygen's "live out loud" tenets. During the first season of “The Glee Project", the Facebook page also facilitated unparalleled interaction between fans and on-air talent via featured likes linking to contenders' individual Facebook pages and live streaming video chat events. For “The Glee Project" premiere, Oxygen partnered with Facebook to develop the first fully personalized live streaming application on the Facebook platform. Fans were able to RSVP to a one-hour live streaming video event and could chat and interact with all 12 contenders via a tab on our Facebook page. Fans could personalize the event by installing the application on their own Facebook pages and inviting only their friends, while still being able to access to the live stream and interact with talent. Throughout the season, fans were able to vote for their favorite contenders in a Fan Favorite poll application on the Facebook page that was part of a cross-platform Bing sponsorship, and could share their votes with Facebook friends and Twitter followers-creating an engaging component for the sponsor's program and new revenue generator for the brand. Other custom tab implementations allowed fans to view an exclusive shout-out video from the contenders, watch weekly previews, access full episode video on Oxygen.com, connect with the show on Twitter, and access opportunities to earn exclusive content, sign up for casting updates, and enter sweepstakes. For “The Glee Project" finale, fans were treated to a two-hour live video steaming event with the Final Four and several fan favorite contenders via the Ustream application. Post-season, engagement continues with news stories featuring contenders’ current activities. As the show entered its second open casting process, fans of the Facebook page were treated with an exclusive video from “Glee" and “The Glee Project" Casting Director Robert Ulrich urging them to audition, and were able to use the Facebook page as a hub of support and camaraderie for both those attending open casting calls and auditioning via online video submissions. Fans were able to access live feeds of photos from open calls in NYC, Chicago and Nashville, allowing those at home an early glimpse at the potential future stars of “The Glee Project". Results The Glee Project Facebook page experienced spectacular growth throughout the show's first season, growing 325% from roughly 70K fans when the show premiered on 06/12/11 to nearly 300K fans after the show's finale on 8/21/11, marking the greatest number of Facebook fans for an Oxygen freshman series. This growth has helped boost additional traffic to Oxygen.com. During this period, Facebook was the #2 external referring domain of all Oxygen.com traffic behind Google. (source: Omniture SiteCatalyst, 06/12/11-8/21/11) Furthermore, Facebook posts generated 53.7 million impressions on the page's wall and in fans' news feeds throughout the season. In the three months since the Season 1 finale, the number of total fans of the page has grown an additional 53%. Our live streaming video events were extremely engaging. Our premiere live stream drew 1,530 participants who spent an average of 17 minutes engaging with the application - a collective total of three weeks time! Our finale live stream was watched by over 37,446 unique viewers who spent an average of 19 minutes engaging with the stream across platforms. Our Facebook page continues to drive high levels of awareness supporting on-air ratings growth. Since its premiere on 6/12/11, the series has posted impressive triple-digit growth with +172% in total viewers and +167% among W18-49. Additionally, "The Glee Project" has reached almost 39 million viewers on multiple platforms, including on-air, Oxygen.com, Hulu.com and VOD. (source: Nielsen Media Research, Omniture, Hulu Partner Portal, Rentrak.) 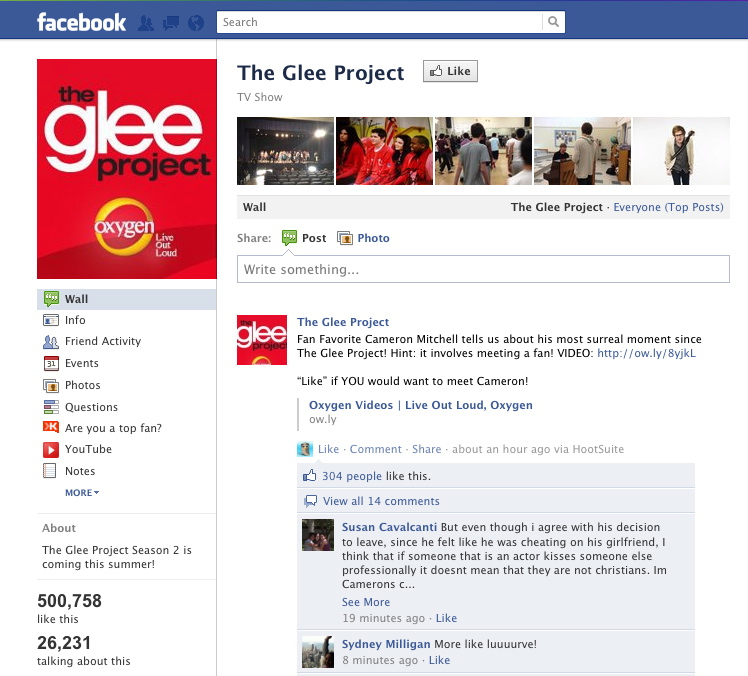