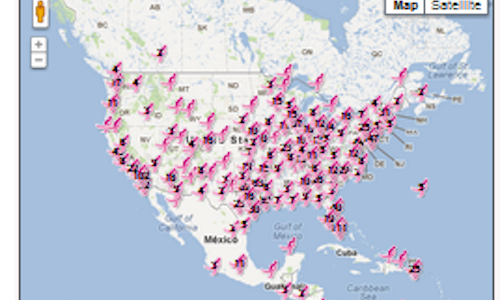 In 2008, American Airlines became Susan G. Komen for the Cure’s® first Lifetime Promise Partner, pledging to raise $1 million annually for eight years to fund the American Airlines Promise Grant. In 2011, to honor National Breast Cancer Awareness Month, American Airlines changed its color scheme to Komen’s signature pink & urged customers to “Fly for the Cure." As part of the month-long observance & to generate social media buzz around its support of Komen for the Cure, American Airlines introduced the first-ever “virtual pinkboard," housed on American’s Facebook page. During October, customers & employees across the globe were invited to visit a “Fly for the Cure" Facebook tab where they could donate to Komen via American’s Miles for the Cure® program & “pin" a pink ribbon at their location on a map to honor the individual they were flying for that month. Other program elements included a designated hashtag (#flyforthecure) & community-building messages on Facebook & Twitter.After researching the use of virtual whiteboards to foster social engagement and participation around a particular cause or campaign, Weber Shandwick saw the opportunity to develop a campaign that would integrate traditional communications channels while using social advocacy in a new way for American Airlines. To build awareness for the virtual pinkboard, Weber Shandwick leveraged social media - primarily Twitter and Facebook - to expand public awareness and communicate directly with customers at selected airports, inviting them to participate in a global 'Pink Out,' in which American Airlines employees around the world wore pink and raised funds to support the cause. Additional aspects of this strategy included Facebook ads targeted to women ages 35-64 in New York, Dallas-Fort Worth, Chicago, Miami and Los Angeles, Facebook ads targeted to all Facebook users, and Promoted Tweets on significant dates during the campaign. For maximum exposure, Weber Shandwick worked with American and Komen to coordinate ongoing social messaging to drive traffic, including a banner image on AA.com, and a special donation page created for the campaign to link from the virtual pinkboard. The virtual pinkboard was a huge success and garnered more than 2,500 virtual pink ribbons “pinned" from around the world; more than 18.4 million Twitter impressions from messages containing the #flyforthecure and #tweetthecure hashtags; nearly 600,000 impressions from Promoted Tweets; 497 total re-tweets; 47,931 total Fly for the Cure tab views; increased Facebook page “Likes" of 2,570 on Oct. 3 (campaign kick-off); and increased Facebook page “Likes" of 1,601 on Oct. 14 (global Pink Out). The virtual pinkboard also generated donations to Komen for the Cure, helping American meet its annual $1 million fundraising commitment and reinforcing customer loyalty. In two weeks, more than $8,710 was raised for Komen via donations to the Miles for the Cure program.