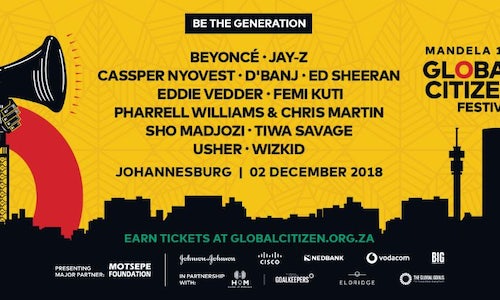 The Global Citizen Festival: Mandela 100 (Mandela 100)campaign was a series of global events, organized in partnership with the House of Mandela, honoring the life and legacy of Nelson Mandela in his centenary year.  Nelson Mandela famously called for this generation to realize an end to extreme poverty in one of his last public speeches, and Global Citizen campaigned on this message with activist-driven events in Vancouver, London, Brussels, and New York’s Central Park, culminating with Global Citizen’s first Festival on the African continent in Johannesburg.

The year-long Mandela 100 campaign harnessed the power of music and the celebration of Nelson Mandela's centennial year to drive Global Citizens worldwide to take action. The campaign hinged on seven of the United Nations Global Goals: Poverty, Zero Hunger, Health, Education, Girls & Women, Water & Sanitation, and Life Below Water. Activists who participated in the campaign took targeted action throughout the year, calling on businesses, government, and philanthropy to honor their commitment towards achieving those goals. They tweeted and called their local representatives, emailed world leaders, and used social media to generate commitments that would:

The campaign soft  launched at the World Economic Forum in January 2018, at an event co-hosted by the House of Mandela and including Global Citizen Ambassador Usher. Alongside its ongoing digital campaigns, Global Citizen also held live, activist-driven events in Vancouver, London, and Brussels. These events followed Global Citizen's free-ticketed events model, with activists earning entry by demanding world leaders make major investments to end extreme poverty. World leaders were invited to the event stage to respond to the public, and announce commitment towards achieving the Global Globals. Artists including Emeli Sandé, Adwoa Aboah, and more, joined the movement and used their platforms to encourage their fans to take action on behalf of the world's poor. Global Citizen additionally held the 2019 Global Citizen Festival in Central Park, a large-scale event including an audience of 60,000 activists and featuring Janet Jackson, The Weeknd, Cardi B, Janelle Monáe and John Legend, with commitments announced from P&G, Microsoft, New York State, and more.

Over the course of the yearlong Mandela 100 campaign, Global Citizens took over 5.65 million actions which resulted in 60 commitments and announcements worth $7.2B (ZAR 104 billion), set to affect the lives of 121 million people. Of this, a total of 14 commitments worth over $3.79 billion (or R54.55 billion) were specifically aimed to positively impact the lives of 6.24 million South Africans. The remaining $3.41 billion (or R49.45 billion) in commitments will benefit people across Africa in countries such as Namibia, South Sudan and Nigeria as well as the Middle East and Asia.

Global Citizen tracks all commitments that are made on its platform and so far some major commitments have begun delivery, such as the United States' $1.2 billion commitment to HIV/AIDs programs, the South African Government’s commitment to providing sanitary products for girls in no fee government schools, Vodacom’s commitment to abolish pit latrines in schools across the country, and Nedbank’s commitment to Nelson Mandela Children’s Fund. 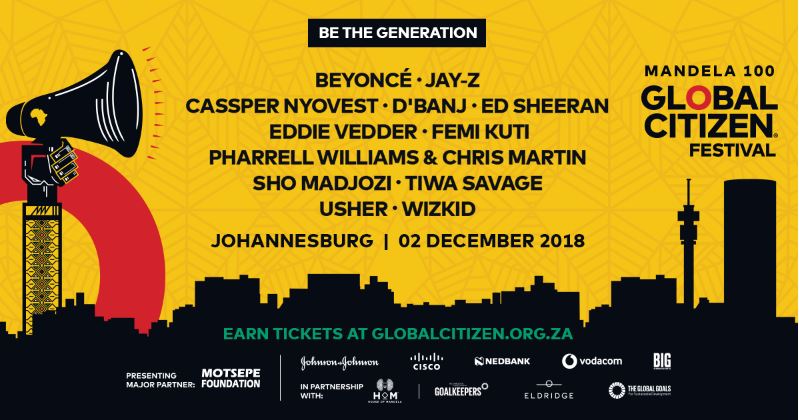