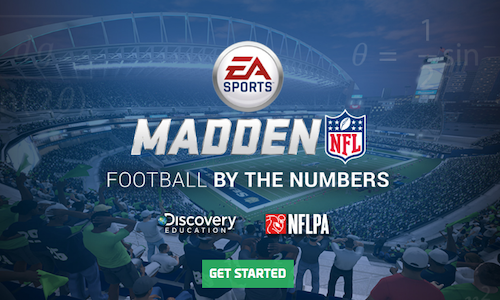 Football By the Numbers

Launched in 2015, Football By the Numbers offers a suite of resources to engage students in STEAM:

This immersive experience transports students to EA Tiburon Development Studio in Orlando, FL with Pittsburgh Steelers’ Wide Receiver Antonio Brown to learn how data dominates video game development. Students will learn how science, technology, engineering and math (STEM) power today’s popular Madden NFL series. Available at no cost, Discovery Education and Antonio Brown introduce students to EA SPORTS engineers, animators, designers, analysts, and producers to discuss career paths and the various applications of STEM used to bring Madden NFL to life. Classrooms across the country can learn how data collected from the NFL Combine’s rookie event –from the 40-yard dash to the vertical jump – are used as inputs to create Madden NFL player rankings. Students will also learn how EA SPORTS gathers thousands of data points on players to create the most realistic in-game experience. Leveraging Antonio Brown as one of the biggest players to market was key in garnering registrations for the VFT.

Since launch, Football By the Numbers has reached nearly 7M students. On social media, the program has an estimated 77,077,617 impressions from 2,900 posts.